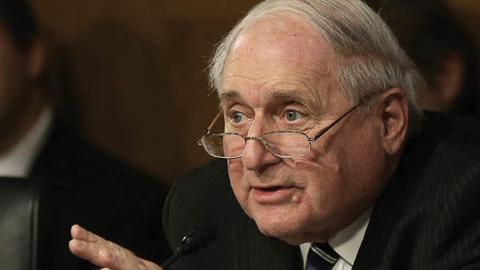 Caption
Sen. Carl Levin (D-MI) questions a witness during a hearing of the Permanent Subcommittee on Investigations of the Senate Homeland Security and Governmental Affairs Committee November 20, 2014 in Washington, DC (Photo by Win McNamee/Getty Images)

After the Cold War’s end, chatter about a supposed “end of history” rebounded across the West. The Soviet collapse ushered in nominally democratic, nominally pluralistic regimes around the region. But while democratic activists hailed that transition, powerful forces watching the spread of unbridled, unregulated capitalism spied an opportunity: profit.

Soon, American lobbyists and public relations professionals spun budding dictators into supposedly democratizing forces. American shell company operators helped warlords grabbing territory and brutalizing populations to conceal their finances. And American bankers aided a new generation of despots and oligarchs, moving their money and transforming ill-gotten gains into legitimate assets, from real estate to luxury goods to priceless artwork. It was the beginning of what academics and journalists would come to describe as “kleptocracy.”

While many politicos celebrated the democratic and capitalistic transitions of the era, there were few figures who could see these malign forces emerging—and how the U.S. just so happened to stand at the center of these new kleptocratic networks. And no figure had a better grasp on the contours of the kleptocratic world to come than a senator from Michigan named Carl Levin.

Levin, who passed away last month at the age of 87, is best known for his decades targeting corporate power in the U.S. He held corporate executives’ feet to the fire in ways that no other legislator could match. Presiding as the ranking member of the Senate’s Permanent Subcommittee on Investigations, Levin pulled back a curtain on opaque financial maneuverings that remained invisible to the rest of us. He uncovered everything from corporate tax evasion to convoluted offshore schemes to Swiss banking secrecy. When it came to the schemes Levin revealed, one of his staffers remembered, “if it wasn’t complicated, Carl wasn’t interested.”

Read: The Legacy of Carl Levin

In many ways, Levin’s efforts at targeting corporate malfeasance have a clear legacy. Everything from the unforeseen rise of Bernie Sanders to the recent successes regarding a global corporate minimum tax can be tracked, at least in part, to Levin’s successes in revealing the corporate rot of the past three decades. There’s a reason, after all, that just last month The New York Times remembered him as “the Senate scourge of corporate America.”

Yet there’s another element of Levin’s legacy that deserves just as much attention. The reason we know how much those aforementioned American industries turned a blind eye to the dirty money flooding into the U.S. is thanks in large part to Levin. It was thanks to a man who, while many of his colleagues simply celebrated American victory, could see a new, darker world emerging. It was thanks to a man who was in many ways ahead of his time—and who helped pass the most important anti–money laundering legislation the U.S. has ever seen.

MUCH OF LEVIN’S work uncovering how America’s banking and financial sector became the preferred destination for money linked to despots and their inner circles—and how that dirty money raced to the U.S. looking to be washed clean—came from the same perch as his other efforts to shine light on corporate malfeasance: the Permanent Subcommittee on Investigations (PSI). Thanks to subpoena powers, unparalleled patience, and an incomparable team of investigators, Levin helped transform the PSI into the go-to shop for uncovering how foreign regimes found as many money-laundering services as they could need in the U.S. As one observer joked, “PSI stands for ‘pretty scary investigations.’”

While at the PSI, Levin helped launch investigation after investigation into how American industries had glommed onto the dirty-money geysers flowing out of supposedly “transitioning democracies,” linked directly to the ruling families or rising oligarchs snuffing out any actual democratization along the way. One PSI investigation, for instance, uncovered how Citibank had actively aided and abetted the sprawling money-laundering network connected to Raúl Salinas, the brother of the former Mexican president. As Levin and his team discovered, Citibank’s “private banking arm” specifically courted suspect funds in Latin America, helping conceal and whisk the money away, and even helping set up foreign shell companies just for the purposes of concealing the transfers.

Another PSI investigation uncovered how one of Washington’s most storied financial institutions—Riggs Bank, which sat kitty-corner from the White House and billed itself as the “presidents’ bank”—had transformed into a money laundromat par excellence, right in the heart of the nation’s capital. Where Riggs had once served figures like Abraham Lincoln, Levin and his team uncovered that Riggs’s biggest clients by the turn of the century were the dictatorial Obiang family stripping the African country of Equatorial Guinea bare. Riggs officials welcomed the dictator and his children with open arms, cycling hundreds of millions of dollars in dirty money for one of the most heinous regimes in the world. Thanks to Levin’s investigation, Riggs eventually collapsed—but not before other American lawyers and American real estate agents began helping the barbaric family ruling Equatorial Guinea move their money in other ways.

Nor was that all: Levin’s investigation also revealed that Riggs had secretly been servicing former Chilean autocrat Augusto Pinochet. Remarkably, while Pinochet had at that point been ousted, he somehow maintained a reputation even in Chile as someone who never profited from his brutal reign. Thanks to Levin’s efforts, though, that reputation crumbled. “He had a reputation of being a patriot, or of at least being an honest ruthless dictator,” Levin told me last year. “And we destroyed that.”

Time and again, Levin and his staff scoured documents, hosted interviews, and uncovered dark-money networks that no one else knew about. There was the despotic Bongo family in Gabon using an American lobbyist to purchase armored cars. There was a corrupt Nigerian politician named Atiku Abubakar using his American wife to secretly funnel $40 million into the U.S. There was an arms dealer in Angola looking to American shell companies to help hide millions in blood money. Through his work, the senator revealed how the U.S. stood at the center of these emerging kleptocratic networks.

And also thanks to Levin, we know why these American industries managed to profit off such financial flows. Because of the deregulatory ethos that still ruled the U.S. in those first post–Cold War decades, these industries had no responsibility to conduct even bare due diligence on the source of the funds they were moving and laundering. American banks, for instance, were free to open up accounts on behalf of any shell companies they pleased, or to work with “shell banks” (which existed only on paper) and “correspondent accounts” on behalf of foreign banks. Most remarkably, American banks could freely process the proceeds of foreign corruption. All of it, perfectly legally.

Thanks to Levin’s efforts, though, those halcyon days of American banks acting as a sieve for all the dirty money the world could provide didn’t last long. Shortly after the 9/11 terrorist attacks, Levin spearheaded the passage of legislation aimed directly at the heart of the American banking sector. Bundled within the Patriot Act, the loopholes allowing America’s banks to feast on all of the kleptocratic money flowing their way were, thanks to Levin, suddenly shut. While the Patriot Act is rightly criticized for any number of civil liberties violations, its anti–money laundering statutes remain the most comprehensive the U.S. has ever passed, and remain arguably the greatest anti–money laundering achievement the world has ever seen.

In the years following, Levin took aim at the other prongs of the American economy still gorging on suspect foreign money, from the lawyers to the real estate agents to the shell company operators. When Congress earlier this year passed legislation that effectively banned the formation of anonymous shell companies, it was due in large part to Levin’s previous efforts—not least because Levin first proposed legislation banning these anonymous shells some 13 years ago.

To be sure, loopholes still remain, and American industries across the board continue to help autocrats and their cronies around the world conceal and launder their finances. And after Levin’s retirement in 2014, a clear vacuum emerged in Washington. As David Cay Johnston asked in The American Prospect in 2014, “For now, the question is: Who will step into Levin’s very large shoes?”

But Levin’s counter-kleptocracy legacy has hardly died out—if anything, it’s suddenly seeing new life. The past few years (thanks in no small part to the clear links between kleptocratic networks and Donald Trump) have ushered in a new generation of policymakers and experts following in Levin’s footsteps. Congressional officials have launched a new caucus focused exclusively on combating kleptocracy, and have begun launching bills aimed at the remaining loopholes Levin and his colleagues attempted to plug. And the White House is finally picking up on a theme Levin began hammering decades ago: that foreign corruption isn’t a threat only to populations elsewhere, but to Americans as well.

It will likely take years, if not decades, for American policymakers to ultimately succeed. But when they do, it’s clear who laid the seeds for that eventual victory. Levin may not have lived long enough to see that end, but the victories that will come in this broader fight against kleptocracy will trace back to one man who, at the turn of the 21st century, could see what others couldn’t, and who realized what needed to be done to finally make sure that America’s Cold War victory provided the fruits of democracy from sea to shining sea, and to those far beyond.

Read in The American Prospect