US Commitment to Allies Will Be Closely Watched 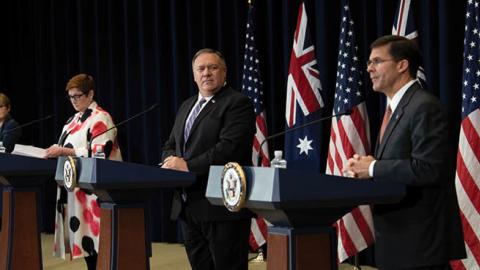 Caption
Australia's Minister for Defense Linda Reynolds and Foreign Minister Marise Payne and US Secretary of State Mike Pompeo listen while US Secretary of Defense Mark Esper speaks during a press conference following the 30th AUSMIN on July 28, 2020 (Getty)

Foreign Minister Marise Payne and Defence Minister Peter Dutton soon will arrive in the US for the annual Australia-US Ministerial Consultations between foreign and defence ministers.

At the conclusion of talks in July last year, Payne declared them to be the most significant of the five she had participated in. Those involved counterparts from the Obama and then Trump administrations.

With a new US president and a world more restless than 14 months ago, there is much riding on Thursday’s meeting on the back of useful visits to Indonesia, South Korea and India.

What is the biggest challenge for both our countries? The immediate one is the pandemic but the enduring and greater one is China, which is true of the Covid-19 period and the post-pandemic one to come. Australia’s strategic geography is the Indo-Pacific. The fundamental Chinese approach in this region is continually to undermine US strategic, military, economic, political, institutional and ideological power, influence and standing.

This is clever. As Beijing sees it, with reduced American presence and relevance, the ability of the US to provide a balance and counter to China in the region is greatly diminished. That triggers the beginning of the endgame. China spends more on its military than the rest of Asia and Oceania combined. Along with its economic weight, there is no possible balance without the US.

It is why the alliance with Australia is critical. As a geographically distant power, the US needs local friends and allies to maintain its regional footholds. At AUSMIN, both sides meet to advance their mutual interests, thrash out differences, come to agreement and make decisions. What they decide will be closely monitored by others looking for signs as to whether US staying power is real.

If AUSMIN delivers, it will be accepted as good evidence that US-led collective efforts are being made to confront the worst elements of Chinese behaviour. If the consultations are seen as an ineffective talk-shop, it will encourage nations to hedge in ways that better suit Beijing’s interests.

In other words, what is agreed between the US and allies such as Australia has far-reaching flow-on effects for the region. International politics and the subsequent order produced is as much about a demonstration of competence and assessment of resolve as it is a balance of power.

Last year’s talks mainly concerned Covid-19 and China. This year will be the same. What makes this AUSMIN possibly more important? It has been a few weeks since the chaotic events in Kabul. Some blame Donald Trump, who cut a poorly negotiated deal with the Taliban back in February last year. But Joe Biden must own the farcical way the withdrawal was conducted, and his foreign policy skill and judgment is under deserved scrutiny.

Like the previous administration, Biden has promised to shift US focus from other parts of the world to the Indo-Pacific. AUSMIN is the first major opportunity to demonstrate that to a crucial regional ally.

There is no time to waste because what is important is now urgent, meaning we have reduced time to respond. Chinese President Xi Jinping is not a patient man. He is pushing to realise Chinese ambitions for Taiwan and in the East and South China seas, perhaps before the decade’s end. He has declared he will use all means, including force, to achieve these objectives.

The prospect of war is truly terrible but must be accepted as a possibility. Unlike China, the US and its allies are relatively unprepared should one occur during the next few years. While the US and its allies spent the past three decades magnanimously preserving the peace, the People’s Liberation Army assiduously has been preparing to win a war.

Before departing Australia, Dutton suggested allies pool resources to accelerate development and deployment of asymmetrical weapons such as longer-range missiles, unmanned vehicles and offensive cyber capabilities, as envisioned by Australia’s 2017 inclusion in the US’s National Technology and Industrial Base. AUSMIN is the perfect setting for the US to show it is serious about creating a genuine allied defence-industry network by assisting Australia in this regard.

In case this sounds extreme, preparing for a fight is not reckless warmongering. The better placed we are collectively to fight and prevail in a conflict during the next few years, the likelier it is we can deter Beijing from provoking one. The Chinese Communist Party’s hold on power is uncontested but brittle. It devotes enormous resources to domestic security and suppres­sion while overseeing a vulnerable political economy still heavily dependent on trade and investment with the US and its many allies. To deter and maintain the peace is to convince Beijing that disaster for it will be the consequence should there be overreach.

Meanwhile, many developing countries in the Indo-Pacific will take longer to emerge from the pandemic and this is ripe ground for China to demand greater subservience from these countries in return for the lure of Chinese state-directed largesse. Much of Southeast Asia is vulnerable. How will the US and Australia respond in this critical subregion?

Then there is China’s economic and diplomatic coercion of Australia. The Biden administration assures us it has our back.

As Beijing’s anger undoubtedly will be directed against others, the region is watching to see what standing up for an ally means to the US. The US President and his administration have said the right things about the Indo-Pacific and the importance of allies. But credibility comes from what it does. All AUSMIN meetings matter, but this one takes on elevated significance.