We Cannot Reason with Iran 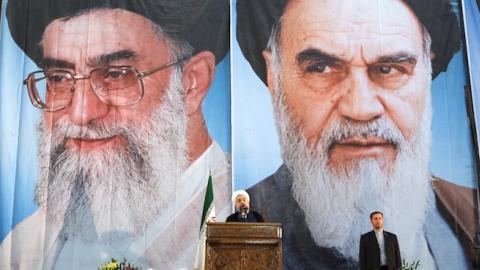 Belief in a world where international conflict is resolved in a framework of tolerance, non-aggression, and the rule of law has underpinned our national security policy since the end of the Cold War. But our policy leaders have been often unable to recognize and admit that some global actors who oppose this vision cannot be persuaded to negotiate in a manner consistent with it. In such circumstances further diplomacy becomes an exercise in wishful thinking, and it prevents the United States from framing policies and taking actions that will protect its people and interests. Israeli Prime Minister Benjamin Netanyahu made this point in his address to the U.S. Congress on Tuesday. The recent history of U.S. relations with Russia, China, Iran, and the Middle East illustrates the theme. And the White House's current approach to Iran underlines it.

At the close of the Cold War, U.S. and other Western leaders proclaimed the end of an era of conflict and tension. President George H.W. Bush declared that a "new world...is struggling to be born." This mindset governed our leaders' attitudes toward Russia for the next 15-odd years, despite disputes with Moscow over Kosovo; despite Russia's stationing troops in Moldova; and despite continuous Russian cheating on arms control agreements. U.S. leaders continued to believe that Russia could be won over as a diplomatic partner.

Then Russia invaded Georgia in August 2008. A few days later, Moscow issued a not-so-subtle threat to Warsaw, saying that Poland was exposing itself to a Russian nuclear strike because it had signed a missile defense treaty with the United States. U.S. policymakers wrung their hands, but the George W. Bush administration in its last few months met Russian bellicosity with little more than public outcry. When the Obama administration took over, its "reset" of relations with Russia ought to accommodate Moscow more and criticize it less, not to deal with Russia as the dangerous foe it had revealed itself to be. After invading Georgian territory and paying no price for its aggression - in fact being rewarded - no wonder Russia felt emboldened enough to invade Ukraine last year.

Russia accurately perceived that it could play U.S. policymakers' faith to Moscow's advantage. In 2013, Russia asked the United States for permission to build six missile and satellite monitoring stations on U.S. territory, for the ostensible purpose of enabling its GPS satellite system. However, such stations also would improve the accuracy of nuclear-armed missiles that Russia is still building and is using to threaten us. Was it preposterous of Russia to think that the U.S. policy leaders would consider such a proposal? Well, no. As reported by The New York Times, the State Department said it believed that allowing Russia to build the stations would help mend the Obama administration's relationship with the Russian government. Only U.S. public pressure caused the proposal to be scrapped.

U.S. policymakers' excessive faith that they can eventually convince adversaries to resolve conflicts in a framework of tolerance, non-aggression and the rule of law - that democracy and freedom have an irresistible and inevitable appeal - has influenced China policy as well. Since the 1980s, our policy leaders have convinced themselves that China, especially as it grows increasingly prosperous, will develop into a more democratic country that eschews force and aggression and adheres to international laws and norms in pursuing its interests. Neither the 1989 Tiananmen Square massacre of Chinese citizens, nor the revelation of Chinese government documents showing an intention at the highest levels of government to overcome the United States and become a world hegemon, modified U.S. the view that China would come around, however slow its evolution.

As spelled out in detail in Michael Pillsbury's brilliant new book, "The Hundred-Year Marathon," China has exploited this. Pillsbury writes that as a matter of secret state policy, China has taken steps to portray itself as harmless and to obscure its intentions. It has done so to actively encourage U.S. policymakers to support U.S. trade, technology, and even military policies that have made China stronger. U.S. policymakers have mostly persisted in their benign view of China, notwithstanding Beijing's escalating aggression toward its neighbors and its long-term intentions to reshape the "new world" to look something more like the old. Pro-China U.S. policies undermine U.S. national security, especially in the long term.

The same sort of wishful thinking has infected our stance toward the Middle East. Policymakers and much of the U.S. media have ignored and dismissed words and deeds that demonstrate implacable hostility to the American vision and malevolent intentions regarding important U.S. interests.

Iran has consistently declared its intention to establish its Islamofascist rule in the Middle East. It has funded and exported terrorism around the world (even on U.S. soil) and cheated on its treaty obligations, including its agreement as a non-nuclear member of the Nuclear Nonproliferation Treaty to not develop nuclear weapons. We initiated negotiations with Iran to compel it to honor its NPT commitments, which are to not acquire nuclear weapons and to abide by UN Security Council resolutions requiring Tehran to suspend enrichment of uranium. Iran has violated that treaty and those resolutions for years.

Now, we are reportedly are on the verge of sealing a deal that would allow Iran 10 years to engage in limited enrichment - supposedly insufficient to make a nuclear weapon in less than a year. Then, after 10 years, Iran could engage in unlimited enrichment, a central ingredient of a nuclear weapons program. As suggested by Netanyahu in his address to Congress, such a deal could be supported only by people who believe that in 10 years Iran will reform - that it will stop supporting terrorists, stop seeking nuclear weapons, and stop aggressively touting the downfall of America and Israel. Apparently, the leaders crafting policy in Washington believe they will persuade Iran to do just that.

Perhaps our policymakers' desire to convert Iran influences their views about Palestine. Hezbollah, Hamas, and Fatah, allies of Iran, have declared - Hamas in its constitution and Fatah in statements in Arabic - that nothing short of eliminating Israel will satisfy them. Iran has repeatedly vowed to wipe Israel off the map. Yet our policymakers criticize Israel for not making concessions to Hamas or Fatah to achieve a two-state peace - a two-state solution that Hamas and Fatah reject, and a peace that both say they won't accept.

The terrorist group that calls itself the Islamic State claims that Muslim texts oblige it to create a 7th Century-style Islamic entity in the Middle East, expand it worldwide, and use beheadings and other brutal practices in the territory it controls and as instruments of conquest. U.S. policymakers dismiss ISIS' invocation of religious imperatives as an outlier. Meanwhile, thousands of Muslims from around the world rush to the Middle East to join ISIS, presumably subscribing to its interpretations of Islam and to ISIS visions that match up to the future they wish to live.

Just because our policymakers and pundits want a world where conflicts are resolved in a framework of tolerance, non-aggression and the rule of law, doesn't mean that this is an achievable goal. Just because our policymakers are prepared to negotiate toward a fair resolution of a dispute with an adversary does not mean that diplomacy is worthwhile. A determination to pursue these goals is a serious vulnerability when the goals are pursued inflexibly.

Our leadership must be prepared to recognize when an adversary is an implacable foe with whom reasonable compromise is not possible. In this circumstance, diplomacy should give way to changes in political, economic and military policy to protect against the dangers posed by the adversary. Continued wishful thinking at that point is a danger itself.