Will India Choose a Side in the Competition Between the U.S. and China? 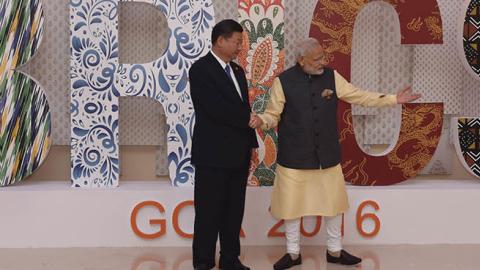 The architects of India’s foreign policy have long preferred a multipolar world. They believe that India, with its limited economic and military capabilities, can play a prominent role on the global stage only when it is not dominated by one or two superpowers. That view led New Delhi to champion the Non-Aligned Movement during the Cold War, and a preference for multipolarity endured in Indian foreign policy thinking after the fall of the Soviet Union. Even while India in the 21st century drew closer to the sole remaining superpower, the United States, its leaders spoke of strategic autonomy, which some analysts have described as “non-alignment 2.0.”

But will this strategy be sufficient for India in a global order that is likely to be dominated by competition between the United States and China? This situation is, after all, markedly different from the Cold War, when neither of the two competing superpowers were in geographic proximity to India. China is not only a neighbor of India’s; it is also a regional rival that is engaged in territorial disputes with New Delhi. For Indian policymakers, Beijing poses a direct threat in a way the U.S. and the Soviet Union did not.

Moreover, China in recent years has sought to expand its influence in South Asia and the Indian Ocean region, challenging India in its own backyard and competing for the same spheres of influence. India could be non-aligned in the U.S.-Soviet rivalry, but it cannot afford to do so in the competition between the U.S. and China. And given India’s size and increasing economic heft, its strategic positioning will have a profound impact on any global attempt to counter China’s rise.

For Indian leaders, China’s increasingly aggressive behavior creates the potential for a clash of political and economic interests between the two most populous nations in the world, not to mention outright military conflict. Tensions have risen this year along the two sides’ disputed border in the Himalayas, where Indian and Chinese soldiers engaged in deadly clashes in June, in the Galwan Valley. It was the second time since 2017 that India was caught off-guard by a Chinese effort to change the reality on the ground along their border.

Elsewhere in the region, India has consistently viewed China’s expanding influence with suspicion. Since 1962, China has sought to build close ties with countries on India’s periphery, like Pakistan, Sri Lanka and the Maldives, in what some strategists see as an effort to encircle it. Beijing has also tried to lay the groundwork for what might one day serve as a network of military and naval bases throughout the Indian Ocean.

Today, China is the top trading partner of all South Asian nations, including India. China is also a major supplier of arms and military equipment for many countries in the region, and it is the leading provider of loans and infrastructure projects. Beijing controls important strategic infrastructure sites like Pakistan’s Gwadar port, Sri Lanka’s Hambantota port, and even a military base in Djibouti. In the realm of soft power, more South Asian students go to China for higher education than to India.

Successive Indian leaders have tried to manage their differences with Beijing through high-level diplomacy. Prime Minister Narendra Modi has met with China’s leader, Xi Jinping, on a number of occasions, most recently in 2018, in the central Chinese city of Wuhan, and again in 2019, in Mamallapuram, in the southern Indian state of Tamil Nadu. India’s initial response to increased Chinese military activity along their Himalayan border, in April, was to keep quiet about the matter in hopes of avoiding an escalation. Even when reports emerged of hand-to-hand combat between Chinese and Indian troops, Modi’s government played down the significance of the incidents. It only publicly acknowledged the standoff after the deaths in the Galwan Valley in mid-June, the first deadly clash along India’s border with China in 45 years.

While New Delhi continues to put faith in diplomacy as the way to deescalate tensions with China, it would do to well to bear in mind Beijing’s tried and tested playbook: convince the other country’s leaders that the only option is to engage in dialogue and avoid conflict. This generally leads to an outcome that China can trumpet as “win-win” cooperation, while avoiding any concessions on its core interests.

Substantial and growing bilateral trade and investment ties between the two nuclear-armed states might incentivize both Beijing and New Delhi to avoid inflaming tensions. However, as many Indian analysts and thinkers have pointed out, concerns about losing access to India’s large market have not prevented the Chinese Communist Party under Xi’s leadership from taking an increasingly assertive stance toward India and its partners. China’s worldview increasingly hinges on power politics, and it appears to see India as a chaotic, inward-looking democracy that rarely focuses on military prowess or economic growth.

This view was evidently reinforced by India’s decision last year to drop out of negotiations for the Regional Comprehensive Economic Partnership, a mega trade deal of countries in the Asia-Pacific that encompass 30 percent of global GDP, which was just signed this month. According to China’s logic, only an expansion in India’s economy and firepower would convince China’s leaders to view it differently.

The U.S. and its allies, including Japan, Australia, Canada and the European Union, have expressed varying degrees of preference for closer alignment with India in order to counter China’s aggressive behavior. New Delhi has slowly warmed to such overtures, even as it resists being enlisted into a U.S.-led coalition against China. The Quadrilateral Security Dialogue—a strategic grouping comprising India, Japan, Australia and the U.S., better known as the Quad—has stepped up its activities in recent years. Australia recently joined the other three Quad members for the Malabar naval exercises in the Indian Ocean for the first time. And India signed an agreement with Australia this summer to use each other’s military bases, followed by a military supply pact with Japan in September.

Whether India is willing to go even further beyond these moves will largely depend on what China does next. The more China continues its confrontational and aggressive policies, the easier it will be for India to align more closely with America and its allies.

The Indian security apparatus, including the various branches of its military and its intelligence community, will also need to move beyond its existing focus on domestic counterinsurgency efforts and a preoccupation with the potential for land-based conflicts with China and Pakistan. Just as China is rapidly modernizing its increasingly sophisticated military, India must also adjust its viewpoint to include multidimensional threats, not just along its land border but also the vast maritime domain and in cyberspace. In October, India announced it would restructure its military into five new theater commands by 2022—a western command that will focus on Pakistan, a northern one that will focus on China, a peninsular command, and one each for air defense and the maritime domain. This move still reflects a primarily land-based and continental approach to India’s threats, indicating that New Delhi is not yet ready to project power beyond its immediate neighborhood.

At the end of the day, what role India plays in the region and the world will depend on its domestic stability, economic power, military capabilities and readiness to project power. All of these elements require consistent policies and political will from Indian leaders. Unless India is able to abandon its protectionist tendencies and become more outward-looking in both economic and security policies, it will not be able to play a major role in a multipolar world.