An Unrecognized Genocide in Nigeria

Today’s Nigeria is the scene of relentless attacks against Christians 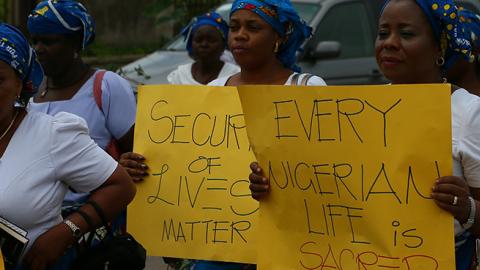 Caption
Catholic faithful stage a peaceful protest to condemn the rampant killing in Benue State, North Central of Nigeria in Abuja, Nigeria's capital on May 22, 2018. (next24online/NurPhoto via Getty Images)

How much do Western Christians know about Nigeria? Do we recall that it is the largest nation in Africa? Are we aware of its hugely important economic role?

Most important of all, do we realize—at this very moment—that another genocide against Christians seems to be taking place there?

Nigeria is home to 186 million women, men and children. Of those, about 86 million—46 percent of the population—are Christians.

Year after year, this West African powerhouse is the topmost economic performer in Africa. It is also a key regional force, capable of stabilizing—or destabilizing—the countries that surround it, including Niger, Chad, Burkina Faso, and Mali.

At the same time, today’s Nigeria is the scene of relentless attacks against Christians, including widespread murder, atrocious maiming, gang rape, and the burning alive of victims in their homes and churches.
Two factions of Islamist jihadis are responsible for most of the violence.

One is the notorious terrorist group Boko Haram. In 2014, these fanatical killers—who have openly aligned themselves with Islamic State (ISIS) —kidnapped some 276 young girls—mostly Christian—from their school. This abduction inspired the #BringBackOurGirls hashtag, promoted by then-first lady Michelle Obama. Boko Haram continues its assaults and is also active in Chad, Niger and northern Cameroon.

Another murderous faction is identified by the innocent-sounding name, “Fulani Herdsmen.” Initially, their violence was attributed to attempted confiscations of land on which they wished to graze their animals. However, thanks to ever-increasing evidence of carnage, outrageous brutality and Islamist ideology, the Fulanis’ jihadi intentions have been clearly exposed.

Open Doors reported in June 2018 that Fulani terrorists had completely destroyed a dozen Christian villages in a four-day massacre.

“Most of the victims were in their homes sleeping when the attacks began … when Muslim Fulani militant herdsmen began their killing spree… In only days, a dozen villages in Nigeria’s Plateau state were wiped out… As many as 200 Christians had been killed, however, some residents fear the death toll may be even higher, as more bodies are yet to be recovered, while others were burned beyond recognition.”

These two dominant jihadi groups fully intend to decimate Nigeria’s Christian minority. Their ultimatum is conversion to Islam, or the imposition of Sharia law over any unconverted survivors. More often than not, they simply murder those who reject their demands.

To make matters even more disturbing, there is evidence that the present government of Nigeria is somehow complicit in the Islamist groups’ assaults. While tens of thousands of Nigeria’s Christians have been killed in recent decades, countless more have been ruthlessly raped, maimed, disfigured and disabled.
U.S. President Donald Trump has directly confronted Nigeria’s President Muhammadu Buhari about Nigeria’s suffering Christians—seemingly to no avail. Buhari, by the way, is of Fulani descent.

My own introduction to Nigeria’s religious persecution took place in 2004, when I first met Baroness Cox, Life Peer and former deputy speaker of Britain’s House of Lords. The Baroness is also a heroic champion of Christians. For decades she has courageously visited distressed nations, where Christians and others are at risk. She has tirelessly provided whatever aid she’s been able to, while carefully documenting their suffering.

In the years that followed our first introduction, I was privileged to interview Caroline Cox extensively while I wrote her biography, Baroness Cox: Eyewitness to a Broken World, which was released in 2007.

Lady Cox first visited Nigeria in 1998, where Christians were already enduring persecution. At the time, an Anglican bishop pleaded with her to take note of their plight and to “tell the world what is happening here in Nigeria.”

She has done so ever since.

Lady Cox frequently returns to Nigeria, and consistently recounts deadly religious attacks. And it so happened that I heard from Lady Cox just a few days after Christmas 2018, learning that she had recently returned from yet another fact-finding trip to Nigeria.

In late November, her organization, HART—Humanitarian Relief Trust—released a report on today’s Nigeria, which begins with survivors’ devastating statements:

“They shot Sarah’s husband and children and so she begged them to kill her too, but they refused, saying that they wanted her to cry and bear the pain.” – Deaconess Susan Essam, Jos

“My sister was raped and her wrists cut off before she was shot through the heart. They took my brother, his wife and all their six children, tied and slaughtered them like animals.” – Margaret, Ngar village

“We heard gunshots. 18 people were killed and their bodies were set alight… They burnt homes. An old man who couldn’t run was killed.” – Chundung, Kurra

“They came around 7pm and left just before midnight. More than 200 of them in black clothes – well armed. Yesterday we lost another 19 of our people.” – Church Warden at St Timothy Church, Jos

“They were hacking and killing people, making sure that those that were shot were finished off…They wore red to conceal blood splashes on their clothes as they butchered their victims.” – Lydia, Ningon village

“I called my brother but there was no reply. The next morning I found out that he, his wife and four others were shot, butchered and burnt.” – Helen, Gana-Ropp

“They were going from house to house, looting and taking away anything they found valuable and then setting the houses on fire.” – Helen, Ex-Land village

“We are not safe in our homes. I am raising an alarm – if the government will listen. Lord in your mercy.” – Archbishop Ben Kwashi, Jos

Conflicting reports indicate that the Nigerian government may have taken some steps to counter the Boko Haram insurgency. It has not, however, demonstrated any such commitment to tackling the escalating violence perpetrated by Fulani assailants.

Mainstream media reports characterize the Fulani’s preplanned, ideologically-motivated attacks as “ethnic riots” or “tit-for-tat tribal clashes between farmers and herders.” The causes of violence are indeed complex, but the asymmetry and escalation of attacks by well-armed Fulanis upon unarmed and vulnerable Christian communities most certainly needs to be addressed. The death toll is enormous.

Baroness Cox explains, “It is becoming increasingly evident that the bloodshed in Nigeria at the hands of the Fulani assailants fits the internationally defined criteria of genocide. It most certainly should be recognized as such.

“It will then be the responsibility of the international community,” she declares resolutely, “to respond accordingly.”

It is with that in mind that I share her distressing report.

May God be merciful, as He reaches out to those Nigerians who continue to suffer abuse.

May we never rest, until we have shared the truth with the world about Nigeria’s genocidal jihadis.

And may the international community respond, in strength and compassion, to Nigeria’s bruised, bleeding and broken-hearted Christians.