The Destruction of Churches and Religious Communities in Ukraine Matters 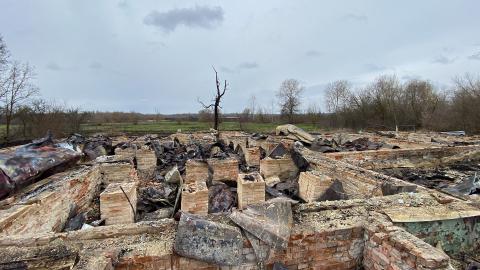 Caption
Ruins of Church of the Ascension in Lukianivka, Kyiv Oblast, Ukraine on April 10, 2022. (Wikimedia Commons)

As you enter Kyiv’s Peace Temple Church’s main hall, the first thing that strikes you are hundreds of boxes from the World Food Programme, waiting for distribution to those in need. Reverend Volodymyr Kondor explained to us that not so long ago the same hall was packed with hundreds of people seeking shelter from Russian President Vladimir Putin’s barbaric onslaught. In Ukraine, churches have become civil society’s safety net in addition to serving as houses of worship.

Arms do the job on the frontlines, while civil society, and especially church organizations, have been tackling the humanitarian consequences of the invasion—taking on the job of state authorities overwhelmed by the war. These cultural heritage and religious sites in Ukraine have been often deliberately targeted by Russian forces causing widespread destruction. The reason is twofold. Firstly, invaders are well aware that churches have been functioning as the central organizing force to mitigate damage to civil society; secondly, Russian forces presume that priests and pastors are agents of the Ukrainian government.

Since the start of the war, churches were transformed into bomb shelters, temporary and long-term accommodations, evacuation centers, and sites for humanitarian aid allocations. Religious organizations’ countrywide networks have become quintessential to provide and distribute aid packages and organize evacuation routes from shelled and occupied territories. A large portion of internally displaced people (IDP), and those whose houses were irreparably destroyed, are still quartered in churches.

Many religious buildings have been shelled numerous times, even with people inside. In Mariupol, a mosque sheltering more than 80 was attacked. A 16th century monastery, the wooden All Saints Monastery of Svyatogorsk Lavra, which is regarded as one of Ukraine’s holiest Orthodox Christian sites—ironically, under the protection of the Moscow Patriarchate—was hit several times, killing three monks. Moreover, in some cases, Russian forces opened fire inside churches, shattering icons in Makariv and Irpin.

From the start of the full-scale invasion to Sept. 20, 2022, at least 270 religious sites were fully or partly ruined: churches, mosques, synagogues, educational and administrative buildings of Ukraine’s religious communities. All denominations were affected, even those belonging to the Moscow Patriarchate. Over 100 damaged buildings belong to the Ukrainian Orthodox Church, which declared its independence from the Moscow Patriarchate in May 2022, while around 20 churches are affiliates of the Orthodox Church of Ukraine. Places of worship are the hardest hit of all heritage sites in the embattled country. According to Kateryna Goncharova, a specialist in Ukrainian heritage from the World Monuments Fund, about “two churches were damaged each day” at the beginning of the invasion. The largest number of damaged religious sites are in the Donetsk (67) and Luhansk (58) areas, followed by the Kyiv (43) and Kharkiv (35) regions.

Assaults on religious buildings have multiple implications in international law. First, these are considered war crimes; second, there are concerns of freedom of religion or belief. Shelling a church building not only damages it, but also violates the rights of believers to practice their religion. People fleeing from the horrors of the invasion have no safe place to hide if buildings that are supposed to be sacred and protected by international law are systematically under fire. The St. George Church in the village of Zavorichi was besieged with large caliber machine guns and the Irpin Biblical Seminary was first under aerial reconnaissance drone surveillance and then shelled.

Declassified documents revealed that today’s Russian church was formed under the state, and therefore under the KGB’s watchful eyes. State and church being intertwined is deeply rooted in the former Soviet Union’s history.

Vasyl Vyrozub, a chaplain of the Orthodox Church of Ukraine tasked with taking the fallen Ukrainian soldiers from Snake Island, was interrogated and tortured several times a day during his 70-day captivity. The reason: the Russians were interested in which branch of the Security Service of Ukraine he was working for, and whether he was a member of the Azov and Right Sector—assuming that as a chaplain he must be working for Ukrainian secret services.

Targeting places of worship is not only an assault on religious freedom but is also a brutal attempt to tear up the fabric of Ukrainian society—an attempt that cannot triumph. Putin and his regime must be held accountable for targeting churches that serve as humanitarian and refugee centers.