Pope Francis, and the West, Should Be Wary of the UAE’s Tolerance Agenda

The papal visit is a breakthrough for religious tolerance in the heart of the Muslim world, but severe problems there persist. 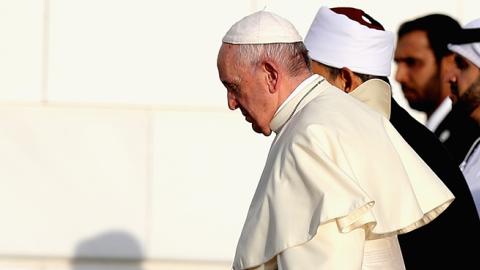 On Sunday, February 3, history was made when Pope Francis landed in the United Arab Emirates, marking the first time any pope has been permitted to set foot anywhere on the Arabian Peninsula in over a thousand years. The papal visit is a breakthrough for religious tolerance in the heart of the Muslim world. But all the hype and hoopla attending it and the risible boasts of openness by the UAE government should not blind us to severe problems that persist.

By the end of his three-day visit, the pope will have been welcomed by the crown prince at the presidential palace, joined by the grand mufti of Al Azhar to sign a document on “human fraternity for world peace and living together,” and invited to dialogue with the local Muslim Council of Elders. It will have culminated in an open-air Mass at which he presided before 120,000 Christians in Abui Dhabi’s Zayed Sports City Stadium. While small by the standards of other papal trips — the Mass in Panama last month had 400,000 in attendance — this will be the largest public Christian worship service held on the peninsula since Islam took hold there in the seventh century.

The UAE is using the occasion to declare 2019 “the Year of Tolerance,” announce a Festival of Tolerance, establish a new cabinet post for a minister of tolerance, and open a state Internet portal on tolerance. In an attempt to rebrand itself as religiously tolerant, it has brought in planes filled with Western opinion-makers, think-tank scholars, and envoys to observe these efforts. It is the UAE’s spiritual equivalent to its flashy displays of modern wealth — the over-the-top shopping malls replete with ski resorts, the palm-tree-shaped man-made luxury islands, etc.

On one hand, this is real progress. It further erodes an ancient taboo against religious freedom on the Arabian Peninsula. Attributed to Islam’s Prophet Mohammed, tradition holds that no religion other than Islam is permissible there. For many centuries none was. Christianity had once been well established in the region, and the ruins of a sixth-century Christian monastery can still be seen on the UAE’s Sir Bani Yas Island. But by the eighth century, all churches and Christian communities had disappeared. Even now few nationals of the UAE or in any other of the Arabian Peninsula countries dare openly profess a faith other than Islam.

Without taking into account Saudi Arabia, the UAE’s neighbor and closest ally, it is impossible to assess the UAE’s new cultural campaign. When I visited Riyadh in 2011 as a commissioner on the U.S. Commission on International Religious Freedom (USCIRF), the director of the official Saudi National Human Rights Commission explained that churches are forbidden in his country because all of it is “a sacred mosque” for Islam’s holiest shrines in Mecca and Medina—two cities completely closed to non-Muslims. That has not changed. As recently as 2015, Grand Mufti "Abdul-Aziz ibn Abdullah Al ash-Sheikh":https://en.wikipedia.org/wiki/Abdul-Aziz_ibn_Abdullah_Al_Shaykh, Saudi Arabia’s chief religious and legal authority, openly declared that all churches in the entire peninsula region should be destroyed. The Saudi cabinet shakeup after the Khashoggi murder scandal did not touch the grand mufti — he remains in that office to this day. Saudi Arabia’s intolerant policies are reinforced by the government’s educational system, in which there is “a troubling "rise in intolerant content":https://www.uscirf.gov/news-room/press-releases-statements/uscirf-conde… in Saudi textbooks promoting hatred and violence” against non-Muslims, women, and gays, according to a recent USCIRF report.

In this context, that the UAE celebrates the arrival of the Catholic pope and allows some churches and a public worship service for its non-Muslim foreign workers is a significant development. But, by wrapping itself in the mantle of religious tolerance, the UAE invites closer scrutiny, on its own terms. It bears noting, for example, that in a recent "Pew Research Center":http://www.pewforum.org/2018/06/21/number-of-countries-with-very-high-g… index the UAE is ranked “high” for government restrictions on religion. And in 2018 it ranked 45th among the world’s top 50 religious persecutors, according to the respected Christian advocacy group "Open Doors":https://www.opendoorsusa.org/christian-persecution/world-watch-list/uni…. The UAE looks good compared with Saudi Arabia, but it is hardly a paragon of religious tolerance and freedom.

The UAE, like the rest of the Gulf, employs millions of foreign workers, including nearly a million Christians, who account for 12 percent of the population, rivaling the number of its Muslim nationals; almost 90 percent of the country’s population consists of expatriates. The Christians among them are afforded few rights. Since the 1960s, they have been permitted churches and schools, but in severely limited numbers.

By far the largest Christian community in the UAE is the Catholic, which counts 870,000 members. Their 150 nationalities are "reflected":https://saintmarysdubai.org/ in the Mass schedules — English, Tagalog, Arabic, Malayalam, Konkani, Tamil, Urdu, Spanish, Korean, etc. Their worship services have been described as exuberant, and the churches function as social-support centers for these sojourners on temporary work visas, who exist on the margins of UAE national life. Some observers say this is freedom of worship. But it is more like token tolerance. In reality, only a small fraction of Catholics in the UAE can go to church. Half a century ago the government adopted a policy to allows churches but since then has permitted only "nine Catholic churches":https://uaepapalvisit.org/avosa to be built, or one church for every 100,000 Catholics.

Catholic services outside these churches are illegal. Church exteriors must be stripped of their crosses, bells, and all Christian imagery. Religious literature is restricted. Evangelization is banned and blasphemy against Islam is a crime. Anti-Semitism is promoted. Islam itself is tightly restricted: The imams are employed by the state, and the content of Friday mosque sermons is prescribed by the government. Nationals are not free to choose a religion other than Islam.

The seven federated emirates of the UAE remain under authoritarian governance that curbs religious freedom along with free speech, due process, and other basic rights. Its growing tolerance of Christian churches and Sikh and Hindu temples within its territory is delivered as a top-down “privilege” rather than respected as a guaranteed democratic right. This means that the evolution of religious freedom in this region is not inevitable.

In the events this week, the UAE is acting as Saudi Arabia’s more liberal alter ego. At a time when "American support for Saudi Arabia":https://www.bbc.com/news/world-us-canada-46561520 is wearing thin, these Gulf countries are anxious to shore it up by having the UAE show a modicum of the religious tolerance that Saudi Arabia has promised but failed to deliver. The West should commend the UAE at this time but keep it in perspective.

Pope Francis comes to Abu Dhabi hoping for more churches on the Arabian Peninsula and desperate for dignity and respect for all humanity throughout the larger Muslim world. The Catholic Church and other Christian communities in Iraq and Syria are struggling to recover from genocide that was supported by nations in the Gulf. Sunni intolerance continues to threaten Catholic and other Christian communities in Asia and Africa. During a Mass only last Sunday, ISIS blew up a Catholic cathedral in the Philippines.

For this papal visit, Bishop Paul Hinder, apostolic vicar for Southern Arabia, has adopted a theme from the opening line of the Prayer of Saint Francis of Assisi: "Make me a channel of your peace":https://www.avosa.org/! Saint Francis braved shipwreck, beatings, and a perilous journey through the battlefield of the Fifth Crusade to meet with the sultan of Egypt, to build greater human understanding and peace with the Muslim world. Eight hundred years later, the great saint’s papal namesake seeks, in his own way, the same from the Muslim leaders of our own day. The rest of the West should too.