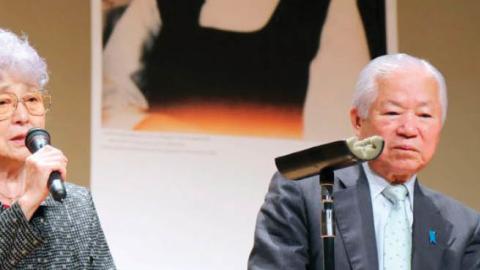 For Americans, the face of North Korea’s human-rights depredations is Otto Warmbier, the University of Virginia student who died three years ago at the hands of the Kim family regime. Otto, 22, succumbed to injuries inflicted during his detention in Pyongyang on trumped-up charges. North Korea sent him home to die.

In Japan, North Korea’s best-known victim is Megumi Yokota, who was 13 when North Korea kidnapped her in 1977 on her way home from school in the western Japanese city of Niigata. She was put to work teaching Japanese to North Korean spies.

Megumi-san is a household name in Japan, and her parents are revered for their advocacy for the return of Megumi and other Japanese abducted by North Korea in the 1970s and ’80s. The death June 5 of Megumi’s father, Shigeru, 87, was front-page news. Prime Minister Shinzo Abe, who wears a blue ribbon of remembrance for the abductees, vowed that he would renew efforts to bring them home.

Japan puts 17 people on its official list of citizens who were kidnapped by Pyongyang, though it suspects hundreds more met the same fate. North Korea repatriated five of those on the list in 2002, following a meeting in Pyongyang between North Korea’s then-leader, Kim Jong Il, and Japanese Prime Minister Junichiro Koizumi. Pyongyang claims four others on the list never actually entered North Korea and the remaining eight, including Megumi, died there. The Yokota family—and the Japanese government—don’t accept the story of her death, in part because DNA tests showed that cremated remains Pyongyang returned weren’t Megumi’s. (Japanese parents frequently keep their children’s umbilical cords.)

Japan is only one of the countries whose nationals have been kidnapped by North Korea. The Washington-based Committee for Human Rights in North Korea has published evidence that Pyongyang has kidnapped citizens of 14 countries. The number of abducted South Koreans, including fishermen, soldiers and students, runs into the thousands. Lebanese kidnap victims who managed to get home reported seeing French, Dutch and Italian women at a spy institute in North Korea. No one knows for sure who they were and Pyongyang won’t say whether they are still in North Korea.

In recent years, North Korea’s kidnappers have turned their attention to China, where they have snatched South Korean citizens helping North Korean refugees. Pyongyang also tracks down and forcibly repatriates its own citizens who have fled to China—without interference from Beijing.

Since Kim Jong Un took power at the end of 2011, the focus of North Korea’s kidnapping operations has been its own citizens who are living abroad. In 2014 agents abducted a North Korean student from the university he was attending in Paris. The young man, the son of a senior regime official who had been purged and executed, escaped from his captors at Charles de Gaulle Airport. He remains in hiding.

A similar episode took place in France in 2013, when a North Korean student vanished from another university. A week later he reappeared on campus guarded by French police. The full story hasn’t come out, but we know that the French authorities made the decision to protect the student because they believed he was in danger of being kidnapped by North Korea.

His name is Kim Han-sol, and he is a nephew of Kim Jong Un. Kim Han-sol’s father, the ruler’s half-brother, was murdered by North Korean agents at the Kuala Lumpur airport in 2017. Kim Han-sol disappeared again after his father’s death and reportedly is in hiding in the West. He speaks fluent English, has called his uncle a “dictator” and expressed sympathy for the people of North Korea.

In 2018 North Korea’s acting ambassador to Italy and his wife disappeared in an apparent defection. Four days later their teenage daughter, whom they had left behind in Rome, went missing. She eventually turned up in Pyongyang, where she is believed to have been taken by North Korean agents. Her seizure was interpreted as a warning to her parents not to go public with the story of their defections.

Shigeru Yokota, a mild-mannered former Bank of Japan executive, worked for decades to raise public awareness of the abduction issue. He helped found an association of family members of Japanese kidnap victims, and he pressed his government to do more to bring Megumi and others home.

Otto’s parents, Cindy and Fred Warmbier, have also worked tirelessly to keep alive the memory of their son and the horrors he endured in North Korea. At the time of his death in 2017 in a hospital in his hometown of Cincinnati, they were by his side.

Shigeru didn’t have that consolation. “My husband and I did our best together, but he passed before seeing Megumi again,” Mrs. Yokota said in a statement. “I’m at a loss right now.”