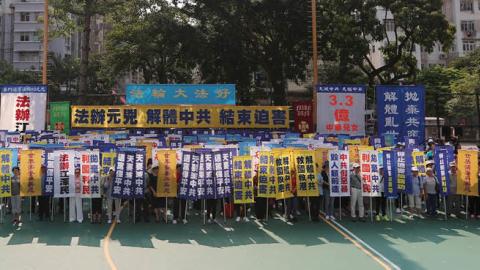 Caption
Members of the Falun Gong spiritual group, a group banned in mainland China, gather to protest at a playground in the Sham Shui Po district in Hong Kong on October 1, 2019. (Photo by MAY JAMES/AFP via Getty Images)

Last year, both the Trump and Biden administrations determined that the Chinese Communist Party (CCP) is waging genocide against Uyghurs and other mostly ethnic Muslim communities in Xinjiang. This is a human-rights watershed, given that this atrocity is ongoing and authored by a powerful, sitting government that vehemently denies and covers up the charge. With this precedent and using similar sources of evidence, a second CCP genocide — one against the spiritual meditation group Falun Gong — is long overdue for recognition.

Shocking reports of 1 million Uyghurs in indoctrination camps (officially called “vocational training centers”) are highlighted by the media. Systematic torture, rape, and forced labor are also reported. Egregious though these are, the Uyghur genocide designation pivoted on other atrocities. As Secretary of State Pompeo explained last January in the Wall Street Journal, evidence showing forced medical procedures to stop Uyghur births was “key” to State Department’s genocide determination. A 2020 Jamestown Foundation study of Chinese data by scholar Adrian Zenz revealed a disparate plummeting of the Uyghurs’ population-growth rate, corroborating testimony that the CCP forced many Uyghur women to undergo abortions, sterilizations, and IUD procedures. Last month, a U.K.-based Uyghur Tribunal of independent experts reaffirmed Pompeo’s reasoning in its own genocide judgment, under U.N. Genocide Convention criteria requiring intentional, physical destruction of all or part of a group.

Regarding Falun Gong, genocide is signaled by several rigorous reports establishing that large numbers of its detained practitioners have been forcibly subject to medical procedures that inevitably kill them. These reports show that, for 20 years, after a declared government intent to eliminate the group, the CCP has targeted Falun Gong detainees for involuntary organ harvesting, in addition to mass internment, disappearance, and torture. This means that victims are either killed while or shortly before their hearts, livers, lungs, and kidneys are surgically excised to be sold in what Beijing boasts is the world’s largest organ-transplant market. A critical new finding from U.N. experts strengthens this case for genocide.

Falun Gong had 70 million practitioners, by Beijing estimates, when, in 1999, PRC president and CCP general secretary Jiang Zemin directed that they be “ eliminated. ” The CCP immediately launched a fierce campaign against the group, maintaining, the State Department confirms, “an extralegal, party-run security apparatus to eliminate the Falun Gong movement.” The State Department reports that, in China, Falun Gong practitioners now number only between between 7 million and 20 million.

The extensive study “Bloody Harvest” and its updates, by former Canadian government minister David Kilgour and experts David Matas and Ethan Gutmann, conclude that “The source for most of [China’s] massive volume of organs for transplants is the killing of innocents: Uyghurs, Tibetans, House Christians and primarily, practitioners of the spiritually based set of exercises Falun Gong.” Evidence that Falun Gong practitioners are not only among the victims of an involuntary organ-harvesting industry but likely have been its main victims over the past two decades was found in two assessments in 2020, one by Matthew Robertson of the Victims of Communism Memorial Foundation (VOC), versions of which were published by the Jamestown Foundation, and the other by the China Tribunal, an independent panel led by Sir Geoffrey Nice, who also headed the Uyghur Tribunal.

China’s hospitals schedule transplants on demand, within days or weeks, documents “ Bloody Harvest, ” while the NIH records that the median wait for kidneys in the United States is four years. An archived version from 2004 of a private, China-based transplant company’s website brazenly advertised living donors to foreign patients: “In China we carry out living donor kidney transplants. It is completely different from the deceased body [corpse] kidney transplants you hear about in Japanese hospitals and dialysis centres.”

While China claims that it ended such abuses in organ sourcing in 2015, including the use of death-row prisoners, and established a voluntary donor system instead, the China Tribunal found that official Chinese transplant statistics are “falsified.” It observed an “incomprehensible gap” between “credible” assessments, based on hospital data, of some 60,000 to 90,000 transplants annually, and the 5,146 eligible organ donors reported in one year by the PRC. The Tribunal and other studies conclude that live Falun Gong detainee sources helped fill this gap. The common media citation of 65,000 Falun Gong practitioners murdered for their organs, it should be noted, is from Ethan Gutmann’s research covering 2000-2008 alone.

Further evidence includes testimony that Falun Gong detainees are commonly subject to prison medical examinations, whose results are entered into government databases for organ allocations by the hospital system. The Jamestown Foundation details an overlap between medical-transplant personnel and CCP cadres in the anti–Falun Gong campaign, and close organ-transplant coordination among the CCP, People’s Liberation Army, prisons, and hospitals.

Two years ago, the China Tribunal concluded that the CCP is guilty of a “crime against humanity” in organ harvesting, but it lacked evidence of intent to consider the CCP guilty of genocide. It raised the possibility that Falun Gong deaths from organ harvesting, which it unequivocally found, could simply be collateral damage in an effort solely intended for profit. More recent information from a respected source lays that theory to rest, at least as far as it concerns the CCP. Namely, documentation by a dozen United Nations human-rights experts reveals that Falun Gong and other religious prisoners of conscience are exclusively targeted for organ harvesting, while other detainees with equally valuable organs are not specific sources. The CCP’s singular targeting of detained religious minorities, in particular Falun Gong, indicates profit is not its main motive (though money may be the motive for medical personnel involved).

A joint statement last June by the twelve independent human-rights experts, appointed by the U.N. to report on such issues as torture, detention, religious freedom, women’s rights, and minorities, declares that they are “extremely alarmed” by “credible information” of “’organ harvesting’, against Falun Gong practitioners, Uyghurs, Tibetans, Muslims and Christians, in detention in China.” This information included reports that these groups are unwillingly subjects of medical exams, whose results are “registered in a database of living organ sources that facilitates organ allocation.” Significantly, among the “credible” information they documented is that “other prisoners are not required to undergo such examinations.” This means that religious minorities are discriminatorily selected for medical execution, as a method of repression, similar to Xinjiang’s Muslims being singled out for medical birth-prevention procedures. The dots can now be connected between the CCP’s directive to “eliminate” Falun Gong and the finding by the China Tribunal and other experts that large numbers of Falun Gong detainees have been selected by CCP and state officials to be sent to certain death close to or on transplant operating tables. This evidences genocidal intent.

CCP manipulation of the World Health Organization, observed during the pandemic, has helped cover up this horror as well. In 2020, scholar Matthew Robertson found that WHO’s advisory anti-organ-trafficking task force, headed by Harvard University transplant surgeon Francis Delmonico, was initiated by CCP Central Committee member Huang Jiefu to be influenced by him as one of the prominent members on the “independent” task force. A government release confirms that it was Huang “[o]n behalf of China [who] proposed to establish a WHO task force.” Unsurprisingly, the task force “dismissed out of hand” the charges of organ harvesting, reported Robertson.

American policy-makers show new willingness to recognize CCP repression. They should clearly condemn this persecution against Falun Gong and declare it a genocide. Had this been done earlier, the Uyghur genocide might never have happened. Notwithstanding, the Beijing Olympics gives warrant to special scrutiny of this horrifying and continuing chapter of the CCP’s human-rights record.