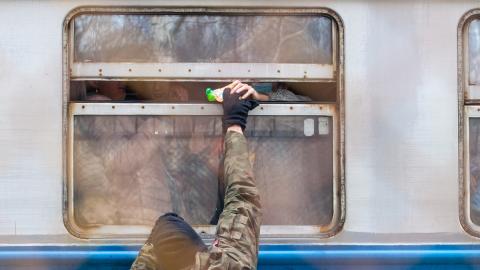 Caption
A Ukrainian solder says goodbye to his family on February 27, 2022, in Przemyśl, Poland, just over the border from Lviv, Ukraine. (Wikimedia Commons)

Lviv Oblast, a province of Ukraine that shares a border with Poland, has become a safe haven for hundreds of thousands of Ukrainians trying to steer clear of the war. But without significant aid from abroad, a grim winter awaits the region.

We arrived at the Victory Christian Church in Lviv, Ukraine’s westernmost major city, on a rainy September afternoon, just when the Sunday service was coming to a close. After the music stopped, people started slowly working their way toward the back of the hall, where volunteers were distributing bags with food and hygiene products for internally displaced people. “We give away 50-60 packages per week,” said Pastor Dmytro Drobyna as he directs us to the curtained-off gallery of the main hall where the bunk beds for displaced people are located. In mid-September, there were around 25 of them staying at Victory Church, most of them in their late teens.

Our translator, Yaroslava, was one of them. Having fled Kyiv at the start of the conflict, she is not planning to go back, even though her family still lives in the capital city. Like Yaroslava, the majority of the young displaced persons we talked to at the church are already settling in, finding jobs, and looking for permanent accommodations. The latter is not easy right now in Lviv because more than 250,000 displaced people have arrived and registered in the region since the start of the conflict. This number, from the Lviv Regional Military Administration, is much higher than the numbers published by the International Organization for Migration. Many of them chose to stay in the city of Lviv, resulting in a significant increase in rent prices, 9.2% from July to August.

“We are in a difficult situation," said Pastor Dmytro. "Right now, the only aid we receive is intermittent private donations from abroad.” The lack of substantial foreign aid, either from governments or from international nongovernmental organizations, is echoed in every church we visited in Lviv that is sheltering displaced people. During the summer, the pressure on church organizations in the city gradually eased as the number of fleeing Ukrainians started to decline in the Western parts of Ukraine in May 2022. After the Russians retreated from the Kyiv region, people fleeing the capital and the surrounding area were at last able to return home. At the time of our visit in September, a large share of those staying in church-run shelters were the most vulnerable ones: teenagers who left their families behind, the elderly, and the disabled. However, that might change soon.

Church-run shelters are scrambling to prepare for winter. The fear that Russian missiles could rain down on Ukrainian power and heat-generating infrastructure once the weather gets colder became a grim reality on Oct. 10. Even Lviv was not spared the missile attack: 30% of the city was left temporarily without electricity; additionally, the water supply was interrupted in two districts affecting thousands of people. Extensive, irreparable damage to civilian infrastructure in other regions of Ukraine might force people to flee to the relative safety of Lviv Oblast. The number of registered internally displaced people already showed a small uptick nationally at the end of September, before Russia renewed its attacks on civilian infrastructure. According to WHO Regional Director for Europe Hans Henri P. Kluge, wintertime challenges might force around 2-3 million Ukrainians to flee their homes.

Instead of used clothes, shoes, and worn coats, it is 9-10 kW gasoline generators that every church shelter we visited in Lviv is trying to obtain before winter. The aim is to set up mobile "hot spots" powered by off-the-grid generators in case the central electricity and heating grid fails. By preparing for the worst-case scenario, church organizations are shadowing the efforts of local municipalities, the latter in turn acting on directives from the central government. However, most churches hosting displaced people have already spread their resources dangerously thin. A probable second wave of refugees, coupled with the potential failure of the city’s power grid, looms large above Lviv.

Right next to the evangelical Golgotha Church, which is hosting 60 people in its seminary, there is a winter-proof mobile camp serving as a temporary home for around 300 people. There are three camps like this in Lviv, all of them donated by the Polish government, hosting more than 1,100 in total. They were built in direct partnership with the city government of Lviv, and the utility bills are paid by the city municipality.

This is a perfect example of direct humanitarian government aid — one that should be followed.

The United States, as well as European capitals, needs to pay more attention to the situation of people displaced internally within Ukraine and seek direct partnerships with local municipalities and NGOs. If the resilience of western Ukraine is not supported by a massive influx of international aid, the city of Lviv and the whole region may suffer a humanitarian disaster.