US Policy on Nigeria Needs an Unblinkered View of Atrocities 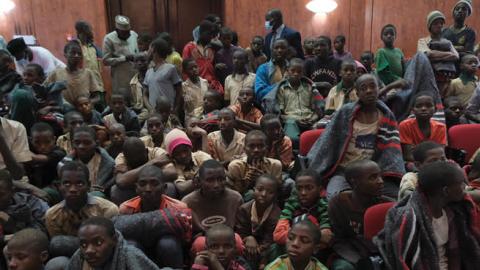 Caption
Released students gather at the Government House with other students from the Government Science Secondary school, in Kankara, in northwestern Katsina State, Nigeria upon their release on December 18, 2020 (Photo by KOLA SULAIMON/AFP via Getty Images)

Nigeria, despite boasting Africa’s largest economy, is “falling apart,” warn that nation’s Catholic bishops. Pointing to the mayhem let loose by various Islamic terrorist groups and criminals, they describe government authorities that are “either unable—or worse still, unwilling—to take up the responsibilities of their office.” Citing the bishops, Council on Foreign Relations’ Nigeria expert Ambassador John Campbell agrees, aptly summarizing the crisis in the headline of his May 31 analysis, “The Giant of Africa is Failing.”

A chaotic, bloody disintegration of Africa’s most populous nation would be catastrophic for the region and beyond, witnesses emphasized at a June 9 hearing of the U.S. Commission on International Religious Freedom. Former Congressman Frank Wolf, the original sponsor of the International Religious Freedom Act (IRFA), was among the USCIRF witnesses. Having visited the country and learned of the ongoing atrocities, he emphasized that there are warning signs of genocide against Nigerian Christian communities and others, which must be taken seriously. He urged the Biden administration to appoint a special envoy for an inter-agency, regional, and international response to this crisis, and a special investigator to give trusted input on the mass atrocities, especially needed in the Middle Belt, a region that stretches across central Nigeria.

The scale of human suffering in Nigeria is already horrific. In fact, last December, the U.S. State Department designated Nigeria, along with China, North Korea, and a shortlist of other of the world’s worst religious persecutors, as a “Country of Particular Concern (CPC),” under IRFA.

Inexplicably, the department stopped short of adopting specific policies and sanctions with its determination, invoking a legal waiver for Nigeria instead. Beyond giving generous amounts of humanitarian aid to Nigeria’s burgeoning numbers of refugees and displaced, the United States has no serious policy to address this looming man-made disaster. It seems to even misunderstand the religious problem.

The State Department’s report largely reduces the violence to a climate change-driven clash over resources between two rural economic classes—farmers and herders. It does not state the grounds for its CPC determination. U.S. Ambassador to Nigeria, Mary Beth Leonard, asserted to a visiting delegation of American Jewish and Christian leaders that the conflict is “fundamentally a resource issue,” and not about religion—an assertion, they found “alarming.”

Even a cursory review of attacks shows victims can be targeted for a crime not solely for financial gain, but also for the jihadist intent of forcibly converting, punishing, or eradicating them. USCIRF, an independent, bipartisan U.S. federal government commission, concluded in its report that in Nigeria’s Middle Belt, nonstate militants also conducted attacks on houses of worship, religious ceremonies, and religious leaders, with Christian communities “hit particularly hard.” Last December, the Congressional Tom Lantos Commission held hearings eliciting similar reports.

Over twenty Catholic priests have been abducted, reports the Jesuit magazine America, as well as unrecorded numbers of other Christian leaders.

Many of them were also murdered: Fr. Alphonsus Bello was found dead on May 21, after being kidnapped from his parish in Sokoto state, along with Fr. Joe Keke, who remains missing. On May 19, an Assemblies of God church in northern Nigeria was attacked, killing eight people. On, May 17, gunmen attacked Kadaje community in Kaduna state, killing eight people and kidnapping 11 others, including a Catholic priest. On Jan. 15, Rev. John Gbakaan pastor of St. Anthony’s Church was abducted in Niger state, and found dead the next day, tied to a tree and mutilated by a machete. On Dec. 10, also in Niger state, Rev. Jeremiah Ibrahim of Evangelical Church Winning All was murdered, and his wife and four other women were taken hostage. Also last year, Rev. Lawan Andimi, chairman of the Christian Association of Nigeria (CAN) in Adamawa state, was beheaded after being abducted.

Nigerian civil rights group International Society for Civil Liberties and Rule of Law reported that, in 2020, 2,400 Nigerian Christians were targeted and killed by jihadists, mostly by Fulani herdsmen. And this year through April, no fewer than 1,470 Christians were killed in jihadi attacks, including 89 who were Igbo Christians. I received stomach-churning photos of 50 others in the southern Oyo state who were hacked to death as they slept last Sunday night—such attacks feed a secessionist movement there.

As the bishops lamented, there is typically no state investigation, arrest, or prosecution in these atrocity cases. Certainly, Christians aren’t Nigeria’s only atrocity victims but there can be no doubt that in certain areas they are targeted, and it’s because of their religion.

Since December 2020, heavily armed gangs have abducted and ransomed almost 1,000 schoolchildren, reported the Wall Street Journal. These children are mostly Muslims but are targeted anyhow for defying the Islamists’ religious prohibition against Western education. Some 15 million Nigerian children are now barred from school, as a result, demonstrating the increasing control of the jihadists and their criminal partners.

Journalist Douglas Burton reported for The Epoch Times on Nigeria’s jihadi sex slavery. Teenager Leah Sharibu and 110 other Christian Chibok schoolgirls remain in captivity, as well as many other girls abducted in rural villages and from buses at jihadi checkpoints. Unless used as suicide bombers, these girls are forced to convert to Islam and submit to lives of sexual abuse as jihadi “wives.” (In 2014, ISIS wrote admiringly of Boko Haram for reviving the practice of enslaving infidel women, which it then copied on the Yazidis.)

The United States takes pride in its foreign policy to advance democratic freedoms, including religious freedom, around the world. The Biden administration urgently needs to turn unblinkered attention on Nigeria. It should begin by taking up Mr. Wolf’s recommendations.

Read in The Epoch Times