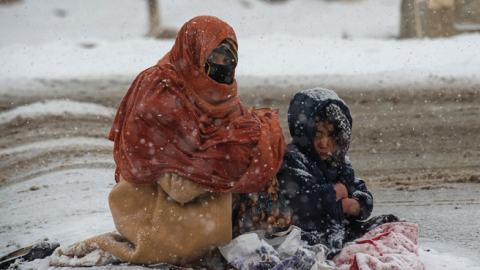 Caption
An Afghan woman begs for money from passing cars in the snow, with her child huddled beside her, on the Kabul road south to Pul-e Alam, Afghanistan, on January 17, 2022. (Scott Peterson/Getty Images)

One year after the withdrawal of American and allied forces from Afghanistan, the question is still being asked whether the United States made a mistake in withdrawing its forces from that country.

It is true that political support for staying in Afghanistan had dwindled twenty years after 9/11 But should America’s global leadership be subject to a time limit on its military engagement in a particular theater?

The Trump administration made a mistake in signing a flawed agreement with the Taliban. The Biden administration transformed folly into disaster in the way the withdrawal was executed. Neither administration examined the alternative—of withdrawing troops through a deal with the Afghan government and leaving a small force behind that could help the Afghan military keep the Taliban at bay.

The consequences of the withdrawal from Afghanistan are not limited to Afghanistan. The ill-executed withdrawal resulted in diminishing America’s international standing. America’s foes were emboldened, and US allies were left wondering if the US would fulfill its commitments about their defense or leave them on their own like it did the faltering Republic of Afghanistan.

Questions still are still swirling about US resolve, about American leaders' ability to maintain domestic political support in long-running international conflicts, and even about the Biden administration’s competence, which was not reflected positively by the withdrawal. With the Taliban back in charge, the international jihadi terrorist movement has certainly been rejuvenated. Groups that had become dormant are now active again. The US found and recently eliminated al Qaeda leader Ayman al Zawahiri in Kabul, indicating that ties between international terrorist groups and the Taliban endure and that the Taliban are unwilling to abide by its commitments under the Doha Agreement.

Second-order consequences of the Afghan withdrawal, and its less than competent execution, include how others, such as Russia and China, might now assume that they, too, could test US willingness to undertake military operations. If the US can just up and leave Afghanistan after investing blood and treasure for 20 years, why won’t it do the same elsewhere?

The political and strategic aspects of American failure in Afghanistan must not be brushed aside. The US did not stay in Afghanistan for 20 years because it had a 20-year plan to do so. It just made a series of ad hoc decisions that prolonged its military involvement.

Instead of going big, the US could have planned a smaller but more sustainable engagement. That this was not done was a function of US politics. Reducing discussion about Afghanistan to it being America’s longest war helped the Taliban’s narrative. Their founder, Mullah Omar, had said years ago, "Americans have watches—we have the time."

One year after the American and international withdrawal from Afghanistan, the Taliban have imposed a brutal Islamist dictatorship on Afghanistan’s 39 million people, denying the most basic human rights. Contrary to assurances by, among others, the chief US negotiator with the Taliban, Zalmay Khalilzad, the Taliban have not changed nor have they ended their ties to al Qaeda. Their oppression of women, whom they deny the right to work or study, is appalling.

Al Zawahiri’s killing demonstrates that the US retains the capability of eliminating known individual terrorists from a distance and does not always need a military presence in a given country. But it will not be able to track every individual terrorist and group. Several groups are already rebuilding their capabilities in Taliban-controlled Afghanistan.

The need to focus on the US-China peer rivalry was touted as one of the reasons for American withdrawal from Afghanistan. But from China’s perspective, the US now no longer has a military presence in South and Central Asia. Working with Russia and Iran, China can now call the shots over much of the continental Asian landmass.

Responding to public frustration instead of building public opinion, two American presidents made decisions relating to Afghanistan that have wider strategic implications than they probably recognized.