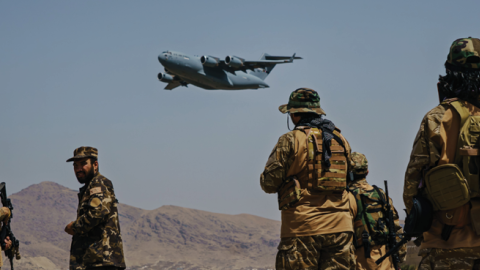 Caption
A C-17 Globemaster takes off as Taliban fighters secure the outer perimeter alongside the American controlled side of of the Hamid Karzai International Airport in Kabul, Afghanistan, on Sunday, Aug. 29, 2021. (Marcus Yam / Los Angeles Times)

The Biden administration set out to declare to the world that “America is Back,” repairing fractures with allies and correcting what it perceived as the errors of the Trump administration’s foreign policy. In their effort to shore up US sovereignty and strengthen US leverage, Trump officials pulled out of treaties and agreements they viewed as undermining rather than furthering US interests. Trump’s Administration also shed light on the serious and long term CCP threat, and used fast and furious force against international enemies such as chief Iranian terrorist Qassam Soleimani. But after more than two years in office, who could argue that the Biden approach has diminished threats to Americans?

Poll after poll shows that Americans across the political spectrum are unhappy with the President’s approach to Russia’s war of aggression against Ukraine, and his approval ratings first began to crater during last summer’s botched US troops withdrawal from Afghanistan.

As we approach Congressional midterm elections, a new generation of influencers and politicians on the right are expressing a clear desire to restrict US security commitments, and to do less and not more to support allies and partners in the cross hairs of authoritarian actors. The eighteen Republicans who voted against Finland’s and Sweden’s ascension to NATO exemplify this movement.

Many in this class believe the solution is retrenchment (so-called restraint) and argue in favor of scaling back US military resources. The intellectual backers of their ideas loudly claim the mantle of Realism. But in reality, it is nearly indistinguishable from the standard fare of retreat we first were served from the “Blame America First” leftists of the Cold War.

These new right wing proponents of retrenchment sound increasingly like Obama’s rejection of American exceptionalism such as when he declared that each population believes their nation is exceptional (effectively embracing moral equivalency between the US and other nations) and added that his first rule in foreign affairs is “don’t do stupid [explicative].”

Furthermore, this faction among the populists’ to retrench is a disjointed fit compared with this movement’s more muscular approach to invest in hearth and home. Should we not seek to deter those who so clearly want to weaken us, take away our influence, and diminish our resources?

The great Walter Russell Mead has outlined the current threats to America and our way of life, and he has done so in stark, compelling terms in his latest column for the Wall Street Journal. Because he lays out some of the most complex subjects so neatly for us, I outline just a few points here.

Twenty-two years into the new century, Americans face the most threatening international environment since the darkest days of the Cold War. The war in Ukraine threatens the post-Cold War order in Europe. Iran is well on its way to a nuclear bomb, and China’s shadow looms larger than ever over Taiwan…

The wars in Iraq and Afghanistan involved immense human and economic costs even as Iranian power surged across the Middle East. America’s failure to enforce trade rules against China facilitated the rise of a hostile communist rival while undermining political support for free trade in both political parties. What posterity will likely regard as the Chamberlainesque responses of American presidents in both parties to Russia’s growing assertiveness allowed Vladimir Putin to rebuild the Kremlin’s power…

Today, China, Russia and Iran are deepening their mutual ties and doubling down on their assault on the U.S. and its alliances. Meanwhile, what some Washington circles still call the liberal world order looks more illiberal and less orderly every day…

China, Russia and Iran have problems of their own, and their continuing rise is by no means foreordained. But if world events continue on their present trajectory, our current decade could fall into chaos and conflict as destructive as the 20th century’s world wars. To stop the grim downhill slide, American foreign policy will have to change course.

The US cannot simply leave entire regions of the world alone because they are “far away.” Terrorist cells pop up where there is sectarian warfare. Harmful ideologies land like a spark on parched leaves when taught to a classroom full of hopeless and hungry youth, spreading across the globe like violent wildfires.

What happens between Saudi Arabia and the Iranian-backed Houthis matters to Americans because the war over the fate of Yemen and its nearby ports affects global energy prices. Even when the United States returns to energy independence, oil and gas will remain a global commodity and it will remain a US interest to keep ports open and deny nations bent on our destruction from having control over them.

The same could be said of food supply. It is absolutely true that the Biden administration’s spending and Green Agenda were from the outset inflationary, especially on the heels of government lockdowns. But it is also true that Russia’s war against Ukraine, “the Breadbasket of Europe,” is threatening famine and raising the cost of key food items, including our own farmers’ fertilizer in America, which is needed for next season’s crops. Despite our clear interest in ending Russia’s assault on Ukraine and assisting Ukrainians to break the naval blockade, the Biden administration has chosen to back down, citing a fear of “World War 3,” all while Russia wields nuclear weapons as it warns the United States and NATO to stay out of its savaging of Ukraine.

Of course, we must prioritize how to contend with this reality. It is true that we have limited resources and manpower, but something has gone very, very wrong when our adversaries seem to possess tools of coercion that they are willing to brandish against us. Meanwhile, we are on our back foot. What could have led to this pitiful and unsettling circumstance? Back to Mead:

Following the Cold War, the American foreign-policy establishment embraced the tragically misguided belief that we could set aside traditional forms of great-power competition and balance-of-power diplomacy while focusing our efforts on ‘global issues’ like human rights, climate change and the construction of an ever-stronger set of international institutions operating under an ever-more-pervasive system of international law.

That destructive consensus rested on two mistaken perceptions. The first was that America’s victory in the Cold War was final and America’s economic and military power plus our diplomatic prestige ensured our unchallengeable supremacy for decades.

The second was that the so-called rules-based world order we were using our power to build would be popular abroad and uncontroversial at home.

America failed to invest in the kind of military necessary to keep its gains from the Cold War. Instead, we divested them. Our navy shrunk, as did our nuclear arsenal, and we divested our theater-range nuclear weapons, just when our adversaries began to bulk up. We failed to invest in the kinds of technologies that would bolster our power and sovereignty and permit us to move in the world without timidity.

No serious grand strategy includes hard power alone. But it is necessary to carry out a foreign policy that earns the respect of our allies and causes our adversaries to second-guess any nefarious plans to undermine the United States. Because, as Mead concludes, “Global issues are real, and hard power on its own is never enough. But if you don’t get the hard-power issues right, nothing else matters much.”

Mead’s contribution to the present debate is a useful reminder for the proponents of US retrenchment and a de-emphasis on military might. Protecting hearth and home doesn’t mean much when, across the globe, those who seek to displace and destroy American power are on the rise, destabilizing everything from food supply to energy commodities to nations’ sovereignty in their wake.

A more sound approach to evaluating our foreign policy begins by conceding that, to secure domestic prosperity, retreat will not meet the demands of this dangerous, highly dynamic environment. Those with the retrenchment impulse are right to be dismayed by many of the results of US foreign policy. But we must properly assess the causes of our failures before we can course correct; and that requires, as Mead teaches, investing in hard power and relearning to behave like a great-power determined to remain one.