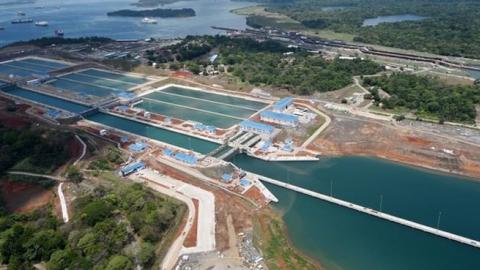 Theodore Roosevelt was president when the U.S. assumed responsibility for building the Panama Canal. Roosevelt’s use of the word, “bully,” became an exclamation of vigorous approval. But, as a noun, the traditional sense of the word remains: a large individual or state that intimidates those who are smaller. China is a bully in the old-fashioned sense of the term, especially in its relations with Taiwan.

On June 13th, the Panamanian government, which controls the canal Roosevelt built, announced that it would cut ties with Taiwan, and recognize the PRC as China’s legitimate government. Taiwan now maintains formal diplomatic relations with only 20 states, all of which have little economic connection to China. Panama’s move is even more consequential because of its abruptness. Panama signaled a desire to switch recognition in 2009 – China rejected Panamanian overtures, hoping that Taiwan’s president at the time, Ma Ying-jeou, would ease cross-strait tensions. Even after the 2016 election of Tsai Ing-wen, the more independent-oriented candidate, Panama maintained its ties with Taiwan: President Tsai’s first foreign visit was to Panama in June 2016.

China’s diplomatic coup in Panama, as a U.S. State Department spokeswoman noted, is a unilateral change of status in the Taiwan Strait. This follows the PRC’s success in Sao Tome and Principe in late 2016. These events are evidence of a continuing diplomatic offensive, designed to isolate Taiwan and bully it into submission. Beijing combines economic inducements with manipulation of the “One China” policy to split off states that recognize Taiwan. Since President Tsai’s election, China has increased its pressure on Taiwan. China has pressured countries including Kenya, Malaysia, and Indonesia to hand over Taiwanese citizens accused of fraud to Chinese authorities, resulting in harsher sentencing. China has also refused to participate in nine group events at the 29th Summer Universiade international student athletic competition—held in Taipei this year—citing “scheduling conflicts” for its team members. President Tsai deserves credit for her refusal to bow to Chinese pressure She expressed Taiwan’s “refusal to engage in a diplomatic bidding war,” and said “we will never surrender to such intimidation.”

China’s actions have several implications. Most important, they are destructive to cross-strait relations. Smooth relations are useful in addressing the large volume of trade, commercial, security, and visitor exchange issues between Taiwan and the PRC. Enmity discourages progress on these and other questions.

The PRC’s ongoing effort to isolate Taiwan also indicates the degree to which the Chinese Communist Party (CCP) remains insecure about its legitimacy. Other examples: the Chinese government restricts its citizens’ access to information by constructing the https://www.washingtonpost.com/world/asia_pacific/chinas-scary-lesson-to-the-world-censoring-the-internet-works/2016/05/23/413afe78-fff3-11e5-8bb1-f124a43f84dc_story.html">"Great Firewall"</a> to filter Internet searches in a manner amenable to the CCP. It combines this with controls on free speech and a "domestic propaganda machine to prevent widespread dissent. China’s rulers see these measures as vital to the regime’s survival.

Another sore point for the PRC leadership: China fails to deliver a standard of life comparable to Taiwan’s, despite the PRC’s GDP dwarfing its island neighbor’s by over 25 times. As long as Taiwan governs itself democratically and retains international legitimacy, the CCP worries.

At the other side of the Pacific, China’s actions in Panama challenge America’s control of its geopolitical backyard. For a maritime power like the United States, the Panama Canal is dually significant. Approximately $270 billion of maritime cargo passes through the canal annually – its recent expansion will increase that amount even further. Ensuring free merchant transit of the canal is a key American objective. However, the strategic implications have an even greater impact on America’s national interest. Hostile influence over the Panama Canal would restrict American warships from transiting quickly between the Atlantic and Pacific Oceans, and force them to circumvent Cape Horn. The US would be trapped as France once was by a British-controlled Gibraltar. France was forced to maintain separate Atlantic and Mediterranean fleets that could not reinforce one another during wartime without significant risk. This prompted Napoleon’s 1805 gamble, leading to Britain’s victory at Trafalgar, after which Napoleon’s chances of ultimate victory greatly diminished.

American control of the Panama Canal in the early 20th century had the same effect on British policy. It helped force the Royal Navy to cede the Western hemisphere to the United States. Similarly, a direct Chinese relationship with the Panamanian government could threaten the US’ ability to mobilize forces during a Pacific war.

More broadly, China’s actions in Panama are additional proof that the PRC has abandoned the https://www.foreignaffairs.com/articles/asia/2005-09-01/chinas-peaceful-rise-great-power-status">"peaceful rise"</a> formula that characterized Chinese foreign policy from the end of the Cold War until 2010. China’s military expansion and modernization, particularly, at sea, is the most overt aspect of this challenge. China’s navy will likely "reach 351 ships by 2020, while the US Navy is not on track to reaching 350 ships before the late 2030s China now fields one aircraft carrier, with another recently launched, and has developed a variety of “ship-killing missiles” to force American assets out of strike range. China’s institutional offensive is also designed to undermine American power by offering a Chinese alternative to Western economic and financial entities. Most notably, the Asian Infrastructure Investment Bank (AIIB) holds half the capital of the World Bank China’s proposed Asian currency basket would create the world’s largest economic bloc – the PRC would provide 60% of its productivity. Such a plan bears remarkable similarity to Prussian chancellor Otto von Bismarck’s use of a customs union to undermine Austria’s power in Central Europe before crushing it militarily in 1866.

China’s actions in Panama represent the subtlest prong of its offensive. It combines diplomatic maneuvering and economic pressure to generate political results. In the case of Panama, China increased its economic foothold in the country in May 2016 by purchasing the Margarita Island Port, a major transit hub on the Atlantic side of the Canal. Proxy companies acted for China. The Landbridge Group, an Australian-based corporation owned by Ye Chen, a prominent party member, executed the purchase. Mr. Ye’s corporation works closely with major Chinese state corporations, like many Chinese-owned major companies. Moreover, Chinese state firms expressed interest in purchasing land surrounding the Panama Canal as part of the “One Belt, One Road” initiative. Time may tell if this possible deal shaped Panama’s political choice.

The Taiwan issue provides Chinese policymakers with an easy excuse to translate economic engagement into political pressure. Only six Central and South American countries retain formal relations with Taiwan, but Argentina, Brazil, Chile, Colombia, Ecuador, and Peru all have unofficial diplomatic representation. By peeling off these states, China can draw South and Central America into its orbit, creating broader strategic issues for the US, and forcing it to commit overstretched resources to another theater.

Countering Chinese influence in South and Central America should be a priority for the Trump administration before China can create major security issues in the Western hemisphere. However, the US must understand the role of supporting democratic governance in this endeavor – ultimate victory requires offering economic and political incentives to South and Central American states in the short term while waging a long-term ideological battle against China’s state-centric alternative to Western liberal democracy. When framed ideologically, Taiwan once again becomes critical. Its democratic prosperity stands in contrast to the mainland’s centralized control. Domestic and international events make this an opportune time for the Trump administration to assert American interests, and uphold American values, in Asia as well as in Latin America.