Central Asians and Taliban Rule in Kabul: Between Fear and Hope 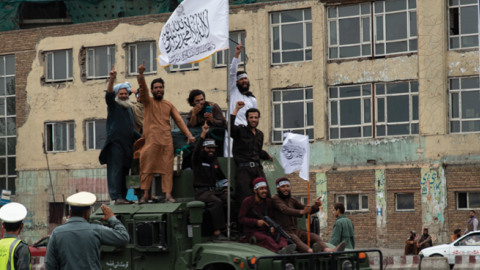 Caption
Taliban members ride on top of an armored vehicle on August 15, 2022, during a celebration of the first anniversary of the Taliban's return to power in Kabul, Afghanistan. (Nava Jamshidi/Getty Images)

Fear remains the prevailing perspective of Central Asian policymakers when it comes to Afghanistan, which under previous Taliban rule, between 1996 and 2001, was a source of regional terrorism, crime, and instability. Nonetheless, Central Asian governments have accepted that they need to work out some modus vivendi with the new Taliban, whose hold on power one year since reentering Kabul amidst the US withdrawal, appears secure despite Afghanistan’s many problems.

Central Asians’ overriding focus is on keeping the Taliban from supporting international terrorist groups. Throughout the past year, Taliban leaders have repeatedly pledged not to assist transnational terrorism or seek to change their neighbors’ secular regimes. Yet the recent US killing of al-Qaeda leader Ayman al-Zawahiri in downtown Kabul has renewed concerns that some Taliban leaders are providing safe havens for their longstanding extremist partners and raising the prospect that, if not now, then in the future, the Taliban will turn a blind eye to their associated actors pursuing jihadist aspirations.

The Taliban leadership has for the past year sought diplomatic recognition and economic engagement with Central Asia. The governments of this region have accepted the Taliban regime de facto but refrained from offering formal recognition. All Central Asian leaders have insisted that the Pashtun-dominated Taliban adopt more inclusive policies that embrace females and more ethnic and religious groups. However, the Tajikistani government has been the most assertive on this point, demanding an end to discrimination against Afghanistan’s ethnic Tajiks.

Tajikistani President Emomali Rahmon has also been concerned about the Taliban’s ties to ethnic-Tajik militants. On several occasions, rockets launched from northern Afghanistan have fallen on Tajikistani and Uzbekistani territory; the Islamic State affiliate in Afghanistan may have launched these rockets to embarrass the Taliban. Moreover, there have been skirmishes between Turkmenistani and Afghan border guards.

Denying recognition provides Central Asians with leverage to encourage cooperative, or at least non-disruptive, Taliban behavior. Even more, breaking with international consensus by becoming the first foreign government to offer formal recognition would undermine Central Asian diplomats’ struggles to sustain global ties with their region following the end of the Afghan war and resulting decline in external interest in Central Asia.

Uzbekistan has also pursued distinctive policies regarding Afghanistan. Whereas other Central Asian governments prioritize the modest goal of limiting the spillover of Afghan instability into their own countries, the Uzbekistani leadership has advocated comprehensive engagement with Afghanistan to realize mutual economic gains and encourage the Taliban to undertake political reforms. Last month, Tashkent held a major international conference attended by senior Taliban and Central Asian participants to discuss means of boosting economic ties along with regional security.

For now, Central Asians continue to export electricity, food, and other goods to Afghanistan, despite Afghans’ limited ability to pay for these deliveries. However, more ambitious proposals to connect landlocked Central Asian countries to the Indian Ocean via Afghan transit remain in limbo, pending improvements in the regional economic and security environment.

Read the full article in the Middle East Institute.