Skip to main content
Reports
China’s Economic Slowdown: Root Causes, Beijing’s Response and Strategic Implications for the US and Allies

China's economy suffers from serious structural problems that have political and strategic policy ramifications for the U.S. and its allies. 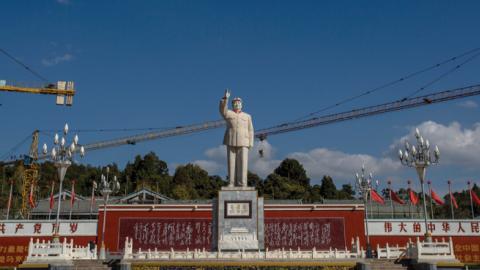 Good policies and responses depend on accurate analysis, sound assessments of the strengths and vulnerabilities of oneself and one’s competitor, and appreciation of structural and other trends that are difficult to shift or circumvent.

The United States has recognized that China poses the most comprehensive and formidable challenge to American interests and values. It is a view increasingly shared by both major political parties, the national security community and policy elites, and the general population. The difficulty is in coming up with sensible and effective responses to an opaque competitor or rival that is increasingly adept at controlling grand narratives by trumpeting apparent strengths and concealing weaknesses.

This monograph attempts to argue and/or demonstrate three main points.

First, it looks at why there were credible fears about the stability and viability of the Chinese economy — especially the financial and banking system — leading up to the end of the Twelfth Five Year Plan (2011–15), and what these were. To understand why Beijing was so concerned, the monograph draws out the serious structural problems that were leading inevitably to a permanent slowdown from the double-digit growth rates of the first three decades of reform.

Importantly, it is not a slowdown in and of itself that matters, but what the slowing economy represents and reveals about the Chinese political economic model. After all, when the second- largest economy in the world grows at 6 percent, this is still a considerable achievement.

Instead of focusing on official or estimated GDP growth rates, which are not analytically useful because they provide little indication of whether the economic activity is commercially sound or sustainable, the monograph focuses on the cost to the regime and broader economy of managing and stabilizing an economy that has poured far too much national wealth into unproductive or commercially irrational areas. This is the basis for the economic, financial, and fiscal crisis that the Chinese Communist Party (CCP) desperately tried to avert.

The purpose is not merely to give a descriptive or academic account of recent economic history, but to introduce the serious structural problems that continue to have political and strategic policy ramifications relevant to the US and allies.

Second, the monograph looks at what occurred from 2015 to the present, and how China apparently overcame its economic difficulties. In fact, it has not overcome its problems, but deferred them to a future time in ways that only its unique authoritarian political economy is able to do.

We are therefore witnessing an outwardly more confident and muscular China emerging at a time when it is failing to effectively tackle its domestic problems, which are getting worse. These tactical measures to put-off or ignore the consequences of its economic and financial problems leaves Beijing in an even poorer structural position than in 2015.

Third, it is clear the Communist Party is not passively awaiting an unhappy economic fate in connection with its mounting imbalances and domestic economic dysfunction. In many respects, its leaders have been highly creative in seeking solutions that do not entail a weakening of the party’s hold on economic power.

On the contrary, the party has been busily shaping and pursuing grand strategic policies such as the Belt and Road Initiative (BRI) and Made in China 2025 (MIC 2025) to solve or alleviate many of its domestic political-economic problems.

This monograph argues that these and other outward-focused initiatives stem most fundamentally from Chinese weaknesses and vulnerabilities but are being remade and recast into initiatives that will strengthen the position of the CCP domestically, ensure greater resilience for its political economy, and advance its ambitious strategic and international objectives at the same time.

In summary, it is about the Communist Party cleverly transforming domestic vulnerability into grand strategy and using economic approaches to gain pre-eminence and “win without fighting.”

Part two in the monograph series, to be published in early 2020, will examine methods of confronting, countering, or else undermining these Chinese strategies and initiatives. It will do so by taking seriously the challenge they present and suggesting responses that take into account Chinese vulnerabilities and the points of leverage available to the US and its allies. This linking of China’s vulnerabilities and weaknesses, on the one hand, and its ambition and purpose with respect to its outward-focused policies, on the other, is essential for effective policy responses. If the domestic is not linked with the external, US policies are much more likely to become complacent, counterproductive, or susceptible to overreaching.

In linking analyses of Beijing’s domestic political economy with its external policies, the monograph will challenge some enduring but incorrect grand narratives that play into the hands of the CCP.

* The external policies of Xi Jinping and the Communist Party begin from a position of unprecedented strength and national resilience, with few domestic vulnerabilities. In fact, the truth is quite the opposite: __Xi and the party are engaged in an approach — high risk and with a high economic cost — of pursuing growing Chinese ambitions abroad while concealing festering internal weaknesses and vulnerabilities.__

* There is a unique economic and governance competence that must be attributed to the authoritarian Chinese political economic framework, in contrast to the chaos and dysfunction of liberal democracies. __For example, China has the proven ability to sail through economic crises. In fact, the Communist Party and its authoritarian model are showing an inability to learn from past errors and a stubborn unwillingness to address serious problems.__

* China does not need the US and other advanced economies to achieve its objectives. It is already a sufficiently large and sophisticated nation and is close to achieving a terrifying self-sufficiency. __In fact, China cannot achieve its external objectives without the cooperation of the US and other major advanced economies. Despite its economic size, its economic tools and levers in the world are surprisingly limited in important respects. Even the resilience of its domestic economy is enormously vulnerable to US policies.__

* The US and other countries have little ability to influence domestic Chinese politics, especially when it comes to challenging Xi’s authority. __In fact, Xi’s high tolerance for risk is causing immense angst for other senior Communist Party members and Chinese policy makers. The more Chinese failures and the rise in international resistance are attributed to Xi’s actions, the more pressure he will feel to retreat and take a more cautious approach.__

China is the most formidable and comprehensive challenge the United States has faced since the Soviet Union. In many respects, China is a more complex and difficult competitor and rival.

The response to China must be based on a good understanding of its strengths and vulnerabilities, and how these both drive the CCP’s policies and behavior.

To borrow two well-known Chinese aphorisms, we should always “seek truth from facts,” and “if you know your enemy and know yourself, you need not fear the result of one hundred battles.”