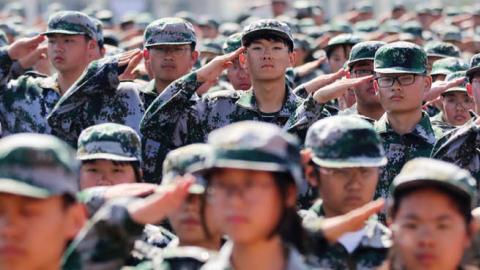 China overtook the US as the country with the largest diplomatic network in the world last November. One month later, the country’s Foreign Minister, Wang Yi, gave his senior diplomats a pep talk demanding that they show a stronger “fighting spirit”.

From North America to Europe, to Asia and Africa, the Chinese wolf warriors set fire to the goodwill that had been built up over two decades of so-called smile diplomacy by issuing insults and threats. Australia has come in for special treatment in recent months, but we are not alone.

The Chinese approach against Australia is a predictable one. State-run media delivers the insults through fiery editorials, and ambassador Cheng Jingye issues economic threats — some of which have been carried out. And yet the government — under Malcolm Turnbull and now Scott Morrison — has not blinked.

It was therefore of great interest when the deputy ambassador to Australia, Wang Xining, addressed the National Press Club on Wednesday on the topic of China And Australia: Where To From Here?

The temperament on display was calm rather than combative. The problem was not what Wang said or his manner, but what he did not say. There were four themes around which the remarks were structured: the importance China attaches to respect, goodwill, fairness and a grand vision for the bilateral relationship. All worthy aspirations. But it was as if Wang assumed the broader national audience for which it was intended had fallen into a collective amnesia about what caused the frictions in the first place.

Indeed, every principle Wang raised could be easily turned against Beijing as evidence of insincerity and malfeasance. Consider the virtue of mutual respect, which Wang describes as following basic norms of sovereignty and non-interference in international affairs. When Canberra passed legislation and took other measures to restrict the activities of the United Front from interfering in and covertly influencing Australian institutions and decisions, Beijing responded with rage. Ditto goodwill, which Wang characterises as the need to resolve differences in an amicable manner. Yet, when the Morrison government proposed an investigation into the origins of a virus that has led to hundreds of thousands of deaths worldwide and caused enormous economic and social destruction, China imposed restrictions on Australian barley exports and refused to accept calls to discuss the issue.

What about fairness? Wang placed that virtue in the context of a non-discriminatory investment and trade environment. How then to account for the fact that China has the most restrictive rules out of any major economy in the world and is the major perpetrator of intellectual property theft and forced transfers — and by some distance? It was therefore far-fetched for the senior diplomat to claim that China simply seeks reciprocity with other countries for the sake of mutual gain.

Then there is the grand vision that our two countries evolve from economic partners towards agreeing on a shared vision to enhance stability and prosperity in the region. Sounds like a good idea except China has a hierarchical and Sino-centric view of where things must end up, where the rights and privileges afforded to China are different to those allowed for smaller countries. One knows because Chinese President Xi Jinping is constantly telling the people this is what the rejuvenation of China entails.

And Xi has backed words with action. He is explicit that grand plans such as the Belt and Road Initiative and Made in China 2025 are all about ensuring that China can dictate prices, policy and discourse when interacting with economic partners. And knowing there can be no strategic or military regional balance without the US, Beijing has spent much of the past two decades trying to weaken, neutralise or dismantle Washington’s alliances and security arrangements that provide the footholds it needs to remain present. In short, the Communist Party’s “shared vision” is one in which Australia and others take their places as deferential nations dependent on Chinese largesse which can be withheld at any time.

Was the unscripted Q&A more convincing? Dismissing the idea that China is engaging in economic coercion by referring to technical reasons why restrictions on local exports are being imposed is contradicted by ambassador Cheng’s direct public warnings in April that Chinese boycotts of Australian exports would be the direct result of Beijing’s displeasure with Canberra.

Blaming COVID-19 for Beijing refusing to speak to Australian ministers was simply bizarre because the cold-shoulder treatment began before the spread of the virus. And when pressed by several others on this issue, Wang implausibly claimed that no request had been made and China’s door was always open.

The remarks might have been a momentary return to a time before Chinese officials were encouraged to be wolf warriors. But no fault was admitted and no change in future behaviour was promised. Australia and the world are less concerned with what Beijing says and more with what it is doing. On that account, it will still be a rough and tough ride.