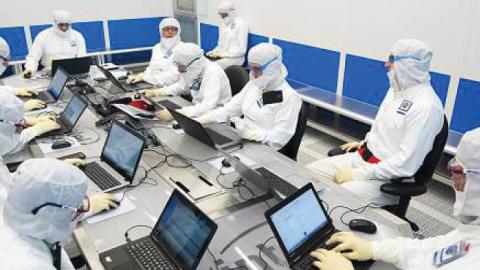 For more than thirty years the U.S. has led the world in the design and production of microchips-the essential tool of all digital technology from smart phones and computers to the power grid and the F-35 Joint Strike Fighter.

Now China is spending $1.4 trillion to become the Colossus astride the global high-tech frontier, including dominating the semiconductor market. Beijing calls it securing “digital sovereignty.” Meanwhile, the U.S. has been sliding from producing more than one third of all microchips made around the world in 1990 to only 12 percent today.

First, other Asian countries have been steadily building their market share over the past two decades, until now Taiwan, Japan, and South Korea are world-beaters in this technology. China, which consumes 50% of the world’s semiconductors, is looking to take over this market—with huge implications for the U.S. in terms of economic as well as national security.

Second, while the U.S. still leads the world in chip design and innovation, but we’ve let chip production done by laboratory-clean assembly lines known as fabs, go to our competitors—while a big portion of our domestic output actually goes to China and tech giants like Huawei and ZTE.

The call is going out to restore and reshore America’s semiconductor resources, as an invaluable national security asset as well as cornerstone of our digital economy.

It’s not going to be easy. Chip manufacturing equipment is hugely expensive, and has to be replaced with wave of innovation. Cost of a new fab can run to $7.5 billion—far more capital investment than even America’s biggest semiconductor companies can afford. All our international competition relies on government funding and subsidies to build their fab manufacturing base. We are going to have to do the same, with more urgency than ever.

The industry has been here before. In the 1980’s chip manufacturers faced brutal competition from Japanese companies like Fujitsu and Hitachi. The answer was creation of a public-private partnership called SEMATECH, which pooled the IP among fourteen semiconductor companies to solve manufacturing issues and aggressively pursue market share with federal support. By 1996—less than ten years after its formation—SEMATECH was able to drop its government funding as the U.S. semiconductor emerged stronger and more than dominant than ever.

Today however, that industry faces a competition with even greater stakes. Japan was a loyal and trusted ally. China’s semiconductor strategy, by contrast, is part of its overall push for global hegemony which it intends to win by means fair or foul. In the end, it’s not just the future of American semiconductor industry that’s at stake, but the entire digital age.

To avoid ceding the new chip war to China, we need to take three major steps for secure our own digital sovereignty, and restore U.S. leadership.

The first is swift passage of the CHIPS for America Act, a bipartisan Senate bill that focuses on a national semiconductor strategy and creates a Manufacturing USA institute for semiconductor manufacturing. The bill is a great curtain-raiser, but unfortunately key provisions including income tax credits and almost $7 billion of funding, were stripped out of the bill.

Therefore, the next step has to be committing government funding for a Made in the USA fab surge. A recent study by the Boston Consulting Group and the Semiconductor Industry Association, calls for a $50 billion federal investment to build up to 19 new art-of-the-art fabs over the next decade (right now we have seventy). The study predicts the investment would position the U.S. to capture a quarter of the world’s growing chip production—compared to just 6 percent if Washington does nothing.

In the era of Covid spending, that amount doesn’t look so daunting, especially when the consequences are at least as grave for our future.

The third step is restricting China’s access to the other half of the microchip battle, which is chip manufacturing equipment. The Wall Street Journal has reported that the global wafer-fabrication equipment market is estimated to rise 10% this year, with 70% of that growth coming from China. Chinese companies have been busy investing in equipment companies around the world. We need a strict embargo on the export of chip manufacturing gear and designs, while also warning allies that selling to China will mean sanctions or worse.

This is a war for the entire digital future, from 5G to advanced weapons systems and the command of space. Just as we couldn’t win World War Two if Ford and GM had been second-rate companies compared to Porsche, Volkswagen, and Fiat, so the future of freedom depends on how American semiconductor companies can equip us at this urgent moment—the moment when the chips are really down.