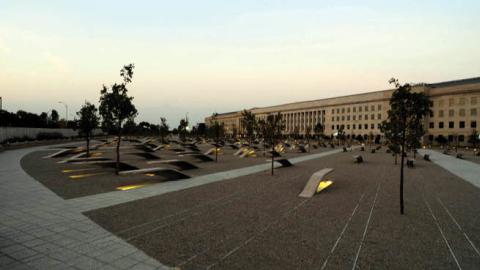 Caption
A view of the Pentagon Memorial honoring the 184 lives lost during the Sept. 11, 2001 terrorist attacks.

* The keystone of the Department of Defense’s institutional architecture is not acquisition, but rather the budgeting process. This governs its ability to allocate funding to achieve national security objectives, links together requirements and purchasing, sets the calendar of the department, controls changes to investment priority, and serves as the mechanism for Congress to exercise its constitutionally granted appropriations powers. While there have been dozens of acquisition reform efforts, the budgeting process has been nearly untouched since 1961.
* Bureaucratic resource allocation processes—especially planning, budgeting, and appropriations—are a critical engine for maintaining an edge in a long-term military competition. In the 1950s, this realization was mechanized by the US, when fast-paced military developments with shifting directions were used to drive cost into ponderous Soviet planning processes. Ultimately, Soviet strategists also recognized that agility in resource allocation would ultimately determine the outcome of competition given a sufficiently long horizon.
* The Department of Defense (DoD) allocates resources through the Planning, Programming, Budget, and Execution (PPBE) system. PPBE is the scheme by which DoD sets its own plans and priorities and also how it asks Congress to approve its spending and provide oversight (often by verifying actual execution against predicted schedule and performance). The history of the PPBE dates to 1961 and is based on period industrial planning concepts.
* The PPBE’s inflexibility increases the difficulty of rapidly shifting funding to emergent innovations that appear promising, as new programs must typically wait more than two years to be included in the budget. Additionally, the PPBE encodes divisions between research, production, and operations activities that stymy iterative or feedback-based development.
* A common theme across core DoD processes including the PPBE is an emphasis on long-term prediction of future needs and an attempt to optimize high-performance weapons against projected requirements. When these conditions are not met (whether from shifting technology or shifting adversaries), these processes may not yield optimal, relevant, or militarily effective results.
* Historical analysis of innovation time cycles—the time measured from the origin of a new concept for military capability until its initial fielding—indicates the cycles were shorter prior to the implementation of the triad of McNamara-era processes, commonly with an average time around five years for both ships and aircraft, and have grown steadily since.
* Emerging technologies, especially information technologies, are central to future conflict and are largely commercial and globalized. The defense acquisition process and legacy defense industrial base approach struggle to accommodate timely adoption of these technologies, as evidenced by lengthy modern time cycles (more than ten years) for development and fielding of new-start weapon systems.
* China may have an edge in its resource allocation process, although this topic merits further investigation. Evidence includes their ability to develop and field twenty-five new unmanned aircraft systems from 2010 to 2020, including stealthy carrier-based unmanned systems.
* Efforts to improve adaptability that focus on acquisition milestones have been only partially successful. Analysis of the chained and linear components of the modern military capability development and fielding process suggests that it is difficult to create a competitive, adaptable resource allocation scheme without revisiting the PPBE and key decision processes that govern the ability to make rapid, early investments in new operational capability or concepts.
* Incoming administration leadership, military leaders, and Congressional leaders need to revisit institutional structure and the budgeting process recognizing the central role of time in driving innovation, adaptability, and resilience. It is not yet too late to favorably shape the trajectory of long-term military competition with China, but the only hope of an upper hand rests on agility and initiative.

* Congress and the DoD should cooperate to promptly launch a limited-scope pilot project on an alternative resource allocation process, designed to foster adaptability in capability delivery and aligned around a high-priority national security operational challenge. Other pilots should also be considered.
* In parallel with one or more budget pilots, Congress or the DoD should sponsor a commission to study holistic changes to the Planning, Programming, Budget, and Execution (PPBE) and appropriations process structured to ensure that the US has a competitive advantage in long-term competition while maintaining Congress’ constitutional role. This commission should include expert members with an understanding of current equities and limitations, and explore emerging concepts potentially including portfolio, organization, mission, and trusted-agent budgeting. This commission may extend its scope to cover critical capability timeline drivers including contracting and early investment decisions that also touch upon adaptability.
* The policy and research community should conduct comparative analyses of the bureaucratic research allocation processes between the US and China, especially focusing on the early decision-making processes associated with starting investments in new military capability and strategic priority setting.