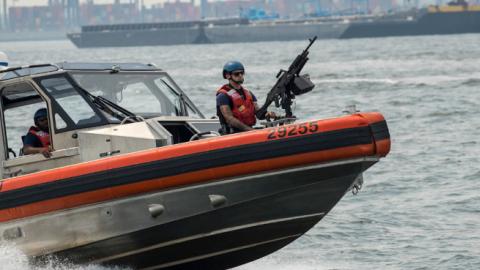 Of the six elements of seapower, the most influential thinker on the subject, Alfred Thayer Mahan, listed geography first. The U.S. is surrounded by water on three sides. This, arguably, makes the seagoing services — the U.S. Navy, Marine Corps and Coast Guard — the most strategic members of the U.S. defense.

They are America’s first and best protection against invasion, as central to containing distant crises as they are to projecting power within and beyond the Western Hemisphere.

Ironically, the oldest of these services, the Coast Guard, is the most politically neglected and is on the chopping block today as Congress deliberates the fiscal year 2020 budget.

The modern Coast Guard traces its heritage to the Revenue-Marine (Act) of 1790 — Treasury Secretary Alexander Hamilton’s recommendation. This makes it eight years older than the Navy, which was reestablished in 1798.

While the Navy and Marine Corps are war-fighting services, the Coast Guard has a more diverse mission. It serves as a law enforcement and public safety organization, but its expanding tasks fall squarely in the category of safeguarding the nation’s global maritime security.

The Coast Guard polices the 12,383 miles of U.S. coastline and port facilities. Nine-tenths of the world’s goods are carried by sea; the U.S. is the world’s second-largest exporter and largest importer of containerized cargo. The Coast Guard is the only service that inspects the 11 million maritime containers arriving in American ports.

It is our most effective tool against the drug trade, too. While most drugs enter the U.S. by land, the large volume of production requires maritime transport from Colombia, Bolivia and Peru to Mexico; 80 percent of narcotics and, specifically, 90 percent of cocaine moves through the “Eastern Pacific Corridor” to Mexico’s western ports. In FY2017, the Coast Guard interdicted $6.6 billion worth of narcotics. (Two years earlier, then-Coast Guard Commandant Admiral Paul Zukunft noted that while intelligence can keep track of 80 percent of drugs arriving by sea, the nation only possesses enough vessels to prevent the entry of 20 percent of illegal drug arrivals.)

Historically, the Coast Guard has been used to meet other strategic needs as well. During World War II, Coast Guardsman served aboard landing craft in the Atlantic and Pacific and performed convoy and anti-submarine warfare missions; Coast Guard cutters were deployed to Vietnam, taking part in blockade operations and training the Republic of Vietnam’s navy.

Modern geopolitics has dictated a similar expansion of Coast Guard missions. The Global War on Terror prompted Coast Guard deployments to the Middle East; since 2002, Coast Guard fast boats in the Persian Gulf have provided essential interdiction and “visit, board, search and seizure” (VBSS) capabilities to the U.S. Central Command.

The Coast Guard has played a similar role in countering Russian and Chinese aggressiveness.

As in the Cold War, dominating the Arctic is a Russian strategic goal. The High North’s natural resources buttress Russian oil reserves, while Russia’s Arctic coastline provides ample basing and security for its nuclear submarines. However, melting ice caps provide another benefit: a new northern trade route that would lessen Russia’s reliance on access to the world’s oceans and provide an alternative to the Suez Canal. Russia fields more than 40 icebreakers, including several with nuclear propulsion; by contrast, the U.S. Coast Guard operates America’s two-ship icebreaker fleet. Still, it is America’s most effective strategic tool in the Arctic.

China’s maritime ambitions are no secret, either: It has extended its naval presence in the South and East China Seas using formal military pressure and so-called gray zone capabilities that remain below a war-causing threshold, like building artificial islands and manipulating international maritime law or using its coast guard and naval militia to patrol territory over which China wrongfully claims sovereignty.

China understands how to manipulate the distinction between “grey hulls” – that is, a nation’s formal navy – and “white hulls” – its coast guard or maritime police. Incidents involving a formal navy have much greater escalatory potential and are indisputably aggressive. But when a white-hulled Chinese coast guard cutter violates Indonesian territorial waters or harasses Japanese fishing boats, Beijing can spin the optics in its favor, construing strategic jockeying as maritime law enforcement. No wonder, then, that Beijing has built a 12,000-ton (about 20 percent more displacement than a U.S. Navy cruiser) coast guard “cutter,” and has subordinated the China coast guard to the Central Military Commission, rather than a nominally civilian agency.

U.S. policymakers have used Coast Guard capabilities in the Pacific to respond to Chinese ambitions in several ways. The Coast Guard has deployed two of its National Security Cutters (NSCs), the USCGC Stratton and Bertholf, in direct support of U.S. Indo-Pacific Command. Over their 184-day deployment, these two NSCs transited the Taiwan Strait despite Chinese protests, interdicted illegal North Korean oil and coal shipments, and trained alongside allied coast guards in the region.

This deployment follows the Bertholf’s participation in RIMPAC exercises in 2018; it will be followed by a proof-of-concept deployment of a Juniper-class buoy tender serving as a mothership to small patrol craft — an operational concept that could substantially assist the Navy. The Coast Guard also plans to home-port three Sentinel-class cutters, designed for maritime rapid response, in Guam by 2022. Guam is as critical to the U.S. military presence in the West Pacific as a keystone is to an arch.

As peer and near-peer competition increases, the Arctic warms, counter-drug operations grow, and the Navy struggles to expand fleet size and capability while replacing its aging ballistic missile fleet, the Coast Guard will increase in importance to national security.

However, there is a growing gap between mission needs and budgetary allocations. The 2020 budget proposal is $700 million less than the Coast Guard’s 2019 budget. The Coast Guard Procurement, Construction, and Improvements account also will be slashed by $1 billion, compared to 2019. Poor funding has already eroded Coast Guard operational capacity.

The most capable, versatile ships in the Coast Guard’s arsenal are its large oceangoing cutters, the Hamilton-class High Endurance Cutter (HEC) and Legend-class National Security Cutter. From the mid-1980s until 2011, the Coast Guard operated 12 Hamilton-class cutters, 10 home-ported in the Pacific. However, it will commission only 11 Legend-class cutters, leading to a capacity reduction within the decade.  Moreover, only six of those cutters will be home-ported in the Pacific. Thus, the Coast Guard is set to lose 40 percent of its Pacific high-endurance operational capacity.

As an indispensable part of U.S. seapower alongside the Navy and Marine Corps, the Coast Guard’s requirement for 90 cutters plus six polar icebreakers must be met. The alternative is to allow the nation’s maritime strength to continue weakening relative to that of its adversaries and their rising challenge to our position as world’s great seapower. Congress should restore the Coast Guard’s budget along with its procurement accounts.