Defense Is the Silver Lining in the Omnibus Bill 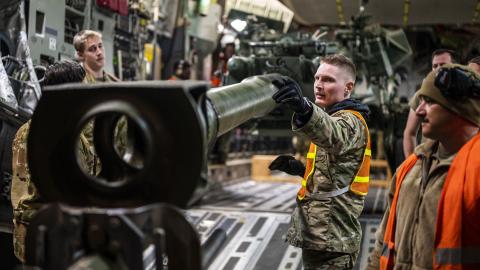 Caption
An airman directs a forklift as it offloads an M777 howitzer due for Ukraine on May 2, 2022. (Air Force Photo by Shawn White)

Whatever the broken processes that have led to passing a behemoth omnibus in a lame-duck session, Senate Republicans did negotiate significant improvements. And now that the bill has passed in the House, it avoids a damaging continuing resolution and precludes the defense bill from becoming a political football in the next Congress.

Decades after President Reagan won the Cold War, the United States is in the early stages of another war that is yet still cold—with communist China. But it’s more complicated than outmaneuvering the Soviet Union because the Chinese Communist Party has a committed junior partner, Russia, with the world’s largest nuclear weapons force. And while the CCP is in the midst of provocations and threats of force in Asia, Russia is trying to make gains and weaken Western power through military conquest in Europe.

After decades of short-sighted policy decisions based on naive assumptions, we do not have the industrial capacity or workforce to produce the weapons necessary to sell to vulnerable allies or to deploy for our own missions. And yet, for a combination of reasons, including a failure to admit the actual cost of inflation that his administration’s policies were exacerbating, President Biden submitted a defense budget proposal to Congress that translated into a real cut to the pay of US military forces, and failed to invest in no-kidding defense programs that are necessary to get on the right military footing to deter and defend against the modern threats.

The National Defense Authorization Act, which authorizes nearly $2 billion for the expansion of production capacity for key munitions for our own national defense and for what we would want to sell or otherwise provide to vulnerable lynchpin allies like Ukraine and Taiwan, was signed by President Biden last week. The omnibus spending bill supports and appropriates the funds for this.

Some commentators and a few, though loud, officials on both ends of the political spectrum will point to the $45 billion supplemental for Ukraine’s security that Congress included in the omnibus and call it a “waste” that is unaccountable and comes at the expense of the American people. Such a conclusion reveals a misunderstanding about what that money buys us.

It continues to be a key interest of the American people to enable Ukraine to lay waste to the military of a top-tier strategic threat to the United States, and to deter further aggression in Europe. Peace is the goal—but not at the unaffordable cost of appeasement. A just peace will only occur once the Biden administration changes its approach from keeping the fight basic to permitting Ukraine to sustain the punishing counteroffensives against Russia. Only then will Zelensky convince Putin that diplomacy is the only credible path forward.

The Ukraine supplemental proposal the Biden team sent to Congress would have slowed the speed and scale of military support to Ukraine through the winter, but senators rejected that approach and instead ramped up support to arm and equip them through winter so that Ukraine and NATO allies could sustain their defense and respond to possible contingencies.

The current spending bill for Ukraine also includes billions to sustain equipping US forces for the NATO region for the purposes of preserving peace and deterring an expansion of aggression to other key allies who have been clear-eyed about the Russian threat. These allies rightly warned that the Biden administration’s waiving of Nord Stream 2 sanctions were likely to lead to Russian belligerence and a deterrence failure.

There are smart reforms a new House Republican majority can implement with willing members across the aisle and with the Senate to ensure the humanitarian support actually goes towards its intended function, and that certain Western European allies are contributing more to Ukraine’s humanitarian and economic needs. But the security assistance in this package is necessary and significant.

Those who have expressed genuine concern about the oversight of weapons going into Ukraine should also be optimistic about the bill. Some elected leaders share those concerns and know it is critical that the American people have greater confidence that their money is not being squandered.

The bill mandates more accountability through detailed tracking and requires reporting back to Congress as weapon systems continue safe delivery. The inspections throughout the war have been thorough, but this must continue so that Ukraine is able to successfully expel the Russians so that NATO can receive the necessary arms it has purchased for its restocks, and to deter further aggression. It is the American people who are contributing so much to this important mission, and they deserve to know that it is not in vain.

The entire omnibus is an eye-watering size and there’s no doubt it is padded with priorities that newly elected Republicans would rightly and staunchly oppose. But there is also crucially timely military support that sitting Senate Republicans wrestled into the bill and if we can go into the new year with greatly improved defense support, it will be a relief.