Deterrence and Intelligence in the Western Pacific 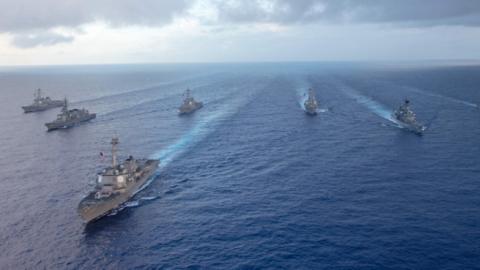 Military historians tend to emphasize dramatic turning points and climactic engagements. Salamis, Lepanto, Aboukir, Trafalgar, Jutland: each confrontation functionally decided the victor of the conflict in question. It is true that discipline and individual skill at command are indispensable variables in an armed force’s success or failure. But equally important are a myriad of preparatory choices that create the contestants’ fleets and armies, supply them, maintain logistical chains, and provide intelligence on the enemy’s movements.

Indeed, even the most powerful and effective military formations in history are crippled without effective intelligence, surveillance, reconnaissance, and targeting information. Over a century ago, the British and German navies eyed each other across the North Sea, each fielding one of the world’s most powerful navies. Nevertheless, the only direct confrontation between the Grand Fleet and Hochseeflotte – and the only fleet action between dreadnought battleships – was brief and inconclusive.

As a result of poor intelligence and communication, neither fleet knew the other had deployed its full line of battle until the engagement had nearly begun. After the two engagements, the battered German fleet managed to slip away in the darkness, primarily because individual British ship captains could not distribute reconnaissance information throughout the fleet. At Midway a quarter-century later, American admirals used their knowledge of Japanese naval communications to prepare a fleet action. But even then, the U.S. strike package that successfully neutralized the Japanese carrier fleet took simple luck – the targeting information that torpedo and dive bomber pilots had been given was wrong.

The information revolution has transformed civilization. The face of battle is no exception. Commanders today can coordinate across vast distances, employing naval, land, air, and space-based forces, and collating targeting information from satellites, UAVs, manned aircraft, ships, and submarines. But despite the abundance of information, it is difficult to sort between relevant and irrelevant information and pass applicable data along to a force scattered across thousands of miles of ocean and air.

This is particularly true in the Pacific. China is engaging in a concerted attempt to monopolize the Pacific island chains, gain a stranglehold over the commerce and trade that passes through the South and East China Seas and use this to propel itself to global dominance. Militarily, the Chinese must push American ships, aircraft, and submarines out of their “strike envelope” by threatening to saturate them with long-range missiles. Ideally, from China’s perspective, operating inside the First Island Chain to decrease the PLAN’s pressure on Taiwan, would be impossible for U.S. forces. China’s neighbors lack the strength independently to resist its expansion: removing the U.S. from the region would rip out the heart of resistance and ensure Chinese regional primacy.

The U.S. has begun to invest in longer-range missiles to counter China’s strategy. But without effective intelligence, surveillance, reconnaissance, and targeting information, long-range standoff weapons will have no meaningful strategic effect. And as of today, the U.S. and its regional allies and partners have not adequately cultivated the seabed sensors, manned and unmanned assets, and space-based imaging tools properly to identify targets in the South and East China Seas.

Improving regional information quality need not require exclusively expensive measures. By re-deploying U.S. Air Force UAVs from the Near East to the Asia-Pacific, U.S. forces can immediately enhance their situational awareness. By developing Medium Altitude, Long Endurance drones that can be deployed from standard surface combatants, American and allied navies would improve their independent organic reconnaissance and targeting capacities. And by creating ground and seabed installations in concert with regional allies and partners like Japan, the Philippines, Vietnam, and Taiwan, the U.S. can begin to crack China’s seemingly impenetrable Pacific anti-access barrier.

The goal of military forces in the nuclear age, particularly during a confrontation between nuclear-armed powers, must be to deter. But deterrence requires a commitment to fighting and winning a war. Deterring China requires reversing current conventional attitudes – that American and allied ships, aircraft, and submarines will have nowhere to hide. Investments in intelligence, surveillance, reconnaissance, and targeting capabilities will demonstrate to China that the U.S. military is willing and able to take the fight to them.