The American people owe their support and solidarity to the Kurdish people, but U.S. inaction is threatening outright abandonment 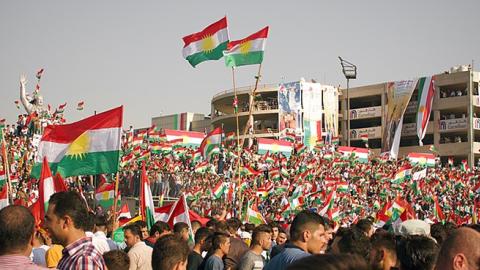 The American people owe their support and solidarity to the Kurdish people, but U.S. inaction is threatening outright abandonment.

In his short time in office, President Trump has set out to define his foreign policy agenda as one that is willing to upset the Washington consensus, to defend American interests even when it offends European sensibilities, to reward those who match their verbal support of the United States with action, and to exhort other nations to fight to defend themselves.

The Kurdish people embody exactly what President Trump has extolled. They want freedom and self-determination. They are willing to fight and die for it. And they are fully committed to an American-led anti-terror military campaign.

In a part of the world that is convoluted and difficult to discern ultimate tribal and ideological loyalties, the Kurds stand apart. Kurdistan is a haven for women in the middle of a region that brutalizes and subjugates them. It is a haven for Christians and Yazidis who, outside of Kurdistan, are often hunted and eradicated.

The Peshmerga is a highly disciplined fighting force with heart. The Kurds have bled and died for our cause, which is, jointly, their cause — to destroy ISIS, or any other Islamist militancy, and to live at peace with their neighbors.

But this week, soon after President Trump delivered a bold and refreshingly honest assessment of the Iranian regime, and the Trump Treasury Department designated as terrorists Iran's Islamic Revolutionary Guards Corps (IRGC), Iranian-backed Iraqi forces seized the oil city of Kirkuk from the Kurdish people.

This was a stunning rebuke to Trump's strategy to push back on Iran's hegemonic ambitions in Iraq and Syria. It was also a tragic and humiliating rebuke of the recent Kurdish independence referendum. The Kurds know Iran is seeking to establish a land bridge through, and ultimately, control, Iraq. They know that unless the United States wrests Iraq from Iran's grip, its hope for a peaceful existence is over.

Senator Ted Cruz (R-Texas) recognizes it. On Thursday he issued a stunning press release in which he stated: “Should the Government of Iraq continue down this path and effectively act as a puppet of Iran, it would require a reevaluation of U.S. support to the country.”

Most of the media’s reporting of the seizing of Kirkuk made no mention of the Iran’s relevance and the State Department has mystifyingly so far denied it. But, on Thursday, Foundation for the Defense of Democracies scholar Juan C. Zarate, asked CIA Director Mike Pompeo, “When we talk about pushing back, what does that mean from your perspective, because I reflect on Qasem Soleimani, the head of the IRGC, the revolutionary guard corps, sort of showing up in all of the wrong places at all of the wrong times from a U.S. perspective. He was just in Kirkuk in the middle of this conflict.”

Pompeo acknowledged, “I’m aware of that." He added, as reported by the Daily Caller, that the best response to IRGC’s activities in the Middle East is to use “all the tools available of U.S. power, so I’ll begin with a handful. … It has been far too inexpensive for the Iranians to conduct this adventurism. We should raise the cost of that. The agency has an incredibly important role there.”

The Trump administration's failure to offer solidarity to Kurdistan and strong military backing against Iran's influence is not only shameful, it makes zero sense. The Trump administration was put in office by a "common sense” constituency. Only too-clever-by-half "nonpartisan" diplomats (almost certainly Obama administration hold-overs) would insist that the Kurdish people must be abandoned for the sake of good relations with the Iraq, regardless of the nature of the Iraqi government, or worse, the Turkish one.

The United States can navigate the relationships with those governments while unequivocally supporting the Kurds. For the sake of everything worth fighting for, it must.

The United States and its allies have nearly defeated the Islamic State and the long road to a political solution is underway. U.S. official policy doesn't have to support a separate Kurdish state. Not yet. But if President Trump, a longtime critic of the Iraq War, can defend and protect the Kurdish people and push Iran’s influence out of Iraq, he will be instrumental in redeeming true and lasting victories in this long, hard-fought war.