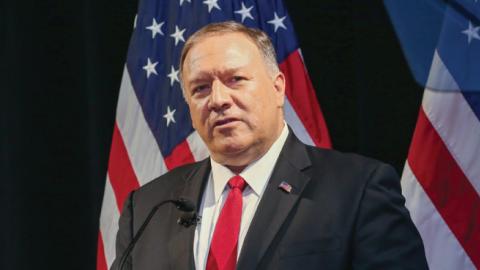 On November 25th, 2019, Hudson Institute Senior Fellow Rebeccah Heinrichs conducted an exclusive interview with U.S. Secretary of State Mike Pompeo. Below is a portion of the interview, which centers on the questions about China’s ideological underpinnings and military threats as well as the broad matter of strategic stability in the context of a rising Chinese military. This portion of the interview has been transcribed then lightly edited for the purpose of making it clearer for the reader. The substance of the questions and answers has not been altered. For more from the interview, please see Rebeccah’s piece originally published at National Review Online on November 26th, entitled “Mike Pompeo Is ‘Keenly Aware’ of the Threats Posed by China.”

Ms. Heinrichs: In the Trump administration security documents, it talks about how US missile defenses, firepower in the region, cooperating on wargaming, our bases in the region. All of those things do not undermine stability; they create a more stable environment and they empower diplomacy. Can you speak to that?

Sec. Pompeo: President Trump has made clear there are multiple elements--our economic power being at the forefront of that. But make no mistake about it, when I sit with my counterparts from, Southeast Asian countries that are concerned about the advances that the Chinese Communist Party's military's making. They're concerned not only with capabilities but with volume. That is, not only are they a more sophisticated set of weapons, but there are more of them as well. They're developing doctrines that put these places at risk. And that power has to be countered. It has to be countered not only by US military capabilities. Whether that's our forces stationed in the region or our ability to reach out from afar. But it needs to be bolstered by a military capacity from our partners, friends, and allies as well. Whether that's the Australians or the British or--

Sec. Pompeo: The Japanese, South Koreans, all of them need to step forward and recognize the malign intent that creates risk for them from the Chinese Communist Party. And I understand they're in the region, their deep economic ties, i-it is-- it cannot be the case that those economic ties can be permitted to green light China to continue its military advances and the risk that opposes to the region.

Ms. Heinrichs: Pushing back on communism is more important than any kind of short-term trade benefit that one can receive, would you say?

Sec. Pompeo: And indeed they're connected. To the extent that the Marxist, Leninist ideology that emanates from the Chinese Communist Party begins to become the dominant ideological threat because of debt-trap diplomacy or whatever the tools that the Chinese may use. If that becomes the dominant threat, then these economic benefits, the political benefits that everyone is so keen on keeping for their own country, including, America, those are at risk as well. So, so you, you posed it-- And I think you posed it properly as a question of how do you think about them? And I just see them as so deeply connected.

Ms. Heinrichs: Last one on China before I move to Russia... You had mentioned before a desire from President Trump to think about, this is not the Cold War anymore. So when we look at arms control treaties-- it's not just the United States and Russia that we-- that, that are the two big players. We are also concerned about what China is doing. And so any modern, strategic dialogue arms control needs to-- needs to involve the Chinese. Do you want to add anything more to what you've said in the past or how we're thinking about that? Can you comment on New START?

Sec. Pompeo: President Trump is crystal clear in thinking about this. We shouldn't begin from the premise of where we are with a series of agreements between the Russia or the United States. The former Soviet Union and the United States as bilateral agreements. Those agreements were designed to create strategic stability, right. Whether they succeeded or not, we can all pick up. But if you said, "What was the motive for us? What was driving the people who with good faith were trying to negotiate these set of agreements?" They were trying to create a system whereby there was adequate verification of what folks were doing and a set of relative power dispositions that would create stability. That was the mission set.

It is no longer the case that you can address that same set of concerns with a set of agreements that solely are between the United States and Russia. Given Chinese increased capacity, capabilities, power, and certainly, what that increased capability and power evinces in terms of their intent, it is the case that we need General Secretary Xi and the Chinese Communist Party to say, "Look, we all have an interest in getting this right, creating strategic stability, let's all have a set of dialogue that surrounds this to see if we can't come to an outcome that would deliver that on behalf of the United-- American people, people of Russia, the people of China and the world." It may be that we can't get there. But it is the case that if it's just a conversation between Russia and the United States today, we have not accounted for all the strategic risk in any material way around the world.

Ms. Heinrichs: Great. Let's, let's switch to Russia. I think the administration rightly withdrew from INF. It was a treaty that only we were abiding by and the rest of the planet wasn't restrained by it. Are you concerned with Russia's, in general, compliance and good faith with, with arms control at this point? Are you seeing a pattern there? Is it-- And how is that affecting the way you're thinking about the Open Skies Treaty?

Secretary Pompeo: Yeah. Look, it's, it's the case, we were unsuccessful at convincing the Russians to acknowledge that they were in violation of the INF Treaty. And we tried, mightily, for an awful long time. We tried through political discussions. We tried through deep technical discussions. And it was very clear. Clear not only to us, too, but every single NATO partner. I can't emphasize that enough. Every single NATO partner came to the fundamental technical understanding that the Russians were in violation, the Americans were not. And that it no longer made sense to be in this. That was a technical and political, diplomatic achievement, but it got us to the right place. It said to the Russians, "Look, you have to comply. You have to not only make a deal but live up to that deal."

So we still have many agreements were in with the Russians. New START amongst them, Open Skies as well. And we need to do the hard work that we did on INF to work on the verification issues, make clear to our partners and allies what's real, what's not. Which pieces are being complied with, which pieces are not. And then, in the end, America has to make its own decision about whether it's in America's best interest to stay inside of these. And, and I add one other thing, Rebeccah, which is as we think about the strategic dialogue with the Russians and the Chinese, verification is more difficult today than it was in the '70s.

The mechanisms for verification need to keep up with modern times. And so the verification regimes that we had in place were, we send a group and they send a group and we go look at each other's stuff, hardware, is still relevant, important, necessary. But there's so much more that has to be done. And if you're-- If you're really looking for es-- a strategic regime that will hold up, that you can have confidence, and quite frankly, the Russians and the Chinese confidence that we're in compliance as well, you have to begin to think about the verification issues in the way that's fundamentally different than we did 20 or 30 years ago.

Ms. Heinrichs: Makes a lot of sense. And I would just add, too, that as the technology has changed, and even if a country like Russia doesn't outright violate the treaty on, you know, technically, that the spirit of the treaty-- they can be pushing it, for instance, the Russians, there are open news reports that they have overflown the president, which might not be in strict violation of the treaty, but...

Sec. Pompeo: I don't want to comment on any particular report, but suffice it to say, we need to draft documents sufficiently that the technical language comports with the spirit as well.

Ms. Heinrichs: Mr. Secretary, thank you so much. I appreciate the time.