How 5G Can Help Defend Taiwan 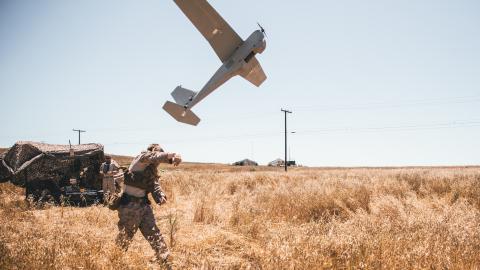 Caption
A US Marine launches an RQ-20 PUMA unmanned aircraft system in San Clemente, California, on May 1, 2020. (US Marine Corps photo by Manuel Serrano)

Xi Jinping’s unprecedented third term as Chinese president began with widespread protests and an economic downturn as COVID restrictions and debt burdens took a toll on China’s social contract. Beyond the immediate impacts on global supply chains, US leaders worry the instability may accelerate Xi’s efforts to force unification with Taiwan before a combination of economic, demographic, and environmental problems constrict his options.

The timing couldn’t be worse for the Pentagon. Faced with rising costs for recruiting, maintenance, and equipment, US fighter, bomber, submarine, and destroyer fleets are all smaller and older than at any time since World War II. With new ships and aircraft taking more than a decade to build, the US military will need to improve the reach, survivability, and lethality of today’s force.

The war in Ukraine suggests a potential approach. Armed at the start of the Russian invasion with decades-old Soviet equipment and a smattering of Western radios and precision weapons, Ukrainian troops cobbled together their own battle networks to stop Moscow’s advance. Using off-the-shelf satellite imagery, command and control software, and Starlink terminals, Kyiv’s defenders attacked targets from armored columns in the country’s north to capital ships in the Black Sea. And when NATO missiles and artillery arrived in numbers, Ukrainian troops were able to coordinate strikes against ammunition dumps and command posts to reverse Russian gains.

To better deter China in the near-term, the US military should take a page from Ukraine’s playbook. The war shows information and decision-making are increasingly central to military success and can enable even Cold War-era weapons to create devastating effects on today’s battlefields. It also highlights how the building blocks of information technology are no longer unique to the military.

Military communications, sensors, jammers, and decoys depend on analog signal processing chains that turn electromagnetic energy into 1s and 0s; software-defined radios that send and receive diverse waveforms; scalable networking stacks that route data to applications; and digital logic that analyzes and displays data for users. But with a ponderous procurement process and force structures that retain multiple generations of equipment in the US inventory, defense electronics are rarely at the cutting edge. Luckily for the Pentagon, however, the commercial 5G industry spent more than $1 trillion over the last decade developing and fielding these technologies for a user base that numbers in the billions.

For example, the Pentagon is struggling to create resilient networks to link its far-flung and fast-moving forces, most recently through the Joint All Domain Command and Control (JADC2) initiative. Although it may not replace highly-specialized systems on major platforms like B-21 bombers or Virginia-class submarines, 5G technology is designed specifically to support distributed operations among a changing array of users in a wide range of environments. That means it could back up custom-built military networks.

More lethally, 5G hardware and software can help US forces accelerate their introduction of new kill chains to deter China. Bombers and submarines take years to build and are modernized over decades. As in Ukraine, improving reach, lethality, and survivability will depend on systems that can be quickly fielded in large numbers, such as unmanned vehicles and the sensors, radios, countermeasures, and ordnance they can carry.

The Pentagon is developing hundreds of new unmanned systems, from commercially-derived vehicles for ground troops to sophisticated long-range systems like Air Force collaborative combat aircraft and Navy Orca underwater drones. But the Pentagon risks losing the cost and scale possible with inexpensive unmanned vehicles by equipping them with costly custom-built systems. If the guidance computer, radar, or jammer on an unmanned system costs more than the vehicle itself, US forces will probably be able to buy too few to achieve the scale or tempo of action needed to track targets across broad battlefields or overwhelm enemy defenses.

Instead, DoD program executive officers could drive down the cost for unmanned vehicles and their payloads by taking advantage of the private sector’s massive and ongoing investment in software, antennae, chips, and signal processing chains. But exploiting the 5G parts bin will demand a “commercial-first” approach to acquisition and a realization that the Pentagon is now a customer, rather than a developer, of information technology.

Instead of attempting to predict future requirements, Pentagon sponsors will need to work with operators to clarify the operational problems of today. Program managers will need to work with vendors to assess how well off-the-shelf technology can address those problems and on what cost and schedule. Acquisition bureaucracies used to decades-long cycles of development, fielding, and sustainment will need to adapt to software update cycles measured in months. And parts of the US defense industry will need to give up the guaranteed revenue of long-term development for the scale of commercial adaptation.

China under Xi is unlikely to give up on its goal of unification with Taiwan, and its window for action is already narrowing. The US military cannot wait for the Navy or Air Force of 2035: It needs rapid improvements today. The scale and adaptability of unmanned systems with 5G technology could provide US forces the tools to undermine Chinese plans, make Xi think twice, and deter aggression against Taiwan.