How to Equip Ukraine to Break the Black Sea Blockade 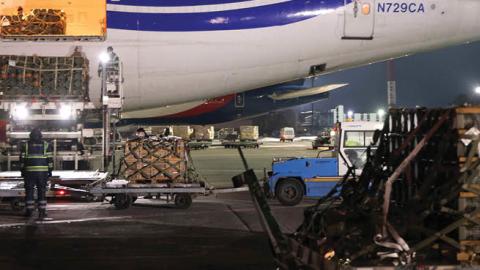 Caption
A ground crew unload weapons and other military hardware delivered by the United States military at Boryspil Airport near Kyiv on January 25, 2022, in Boryspil, Ukraine. (Photo by Sean Gallup/Getty Images)

Since the start of Russia’s invasion of Ukraine in February, the Biden administration and other Western governments have been excruciatingly careful to confine the war to Ukraine’s borders and the neighboring Black Sea—and not do anything that might be interpreted as a military confrontation with Russia. That includes the choice of weapons provided to Kyiv by Western countries. Instead of equipping Ukraine to fight Russia as NATO would—with long-range artillery, air power, and area air defense—the United States and NATO sent short-range missiles, artillery, and small drones, roughly the same weapons used by Russian troops. Although the Ukrainian Armed Forces stopped Russia’s early advance, this symmetrical approach, dictated by Western aid, has led to the grinding conflict we see today in Ukraine’s east and south. Western choices have consigned Ukraine’s soldiers and citizens to a protracted, casualty-heavy war of attrition.

If it ever had any merit, this strategy has now run its course. One obvious shortcoming of keeping Kyiv’s military on life support is that it condemns Ukraine to perpetual warfare, including Russia’s relentless, World War II-style artillery barrages now pulverizing one town and village after another. The recent trickle of more potent weapons—such as U.S.-made High Mobility Artillery Rocket Systems (HIMARS) and Multiple Launch Rocket Systems (MLRS)—hasn’t fundamentally changed the West’s containment strategy or Ukraine’s capabilities on the front.

The other, even more important downside of the West’s conflict containment strategy is that it allows Russia’s blockade of Ukrainian Black Sea shipping to trap about 25 million tons of grain in Ukrainian silos, risking a global economic and humanitarian disaster. The harvest of this year’s crop has just begun—and with much of the old harvest still not shipped, Ukraine’s farmers have no place to store it. Although Kyiv has moved some grain overland and proposed new storage facilities, neither option is sufficient to move goods to international markets at scale and free up storage for the new harvest. Perversely, most of the Ukrainian grain now coming to market is that which has been plundered by Russia from occupied territories and shipped from Crimea or through the Sea of Azov to Kremlin client states such as Syria.

Russia’s war and naval blockade is a major reason why almost 40 million more people are projected to be acutely food insecure this year than at the previous peak in 2020, according to the World Bank. Already, rising prices for basic staples such as flour and bread, along with fuel price inflation, have caused civil unrest across the developing world. Price shocks for food staples have a long history of setting off coups, revolutions, and civil wars—from the French Revolution to the Arab Spring—and the prospect of malnutrition and starvation is highly likely to spur mass migration from Africa and the Middle East at a time when Europe is already straining to host millions of war refugees. The Biden administration is alive to these dangers, but Washington and its NATO partners are unwilling to take the one concrete step that would liberate Ukrainian exports, prevent disaster in the developing world, and shield Europe from potentially vast fallout: break the Russian Black Sea blockade.

But even with Snake Island as a launch point, Ukraine’s missiles could only cover the first third of a grain-carrying ship’s 300-mile journey from Odesa to the Bosphorus. Ukraine will need weapons with longer reach to protect its shipping from the Black Sea Fleet’s two dozen frigates, corvettes, and Kilo-class submarines. Some prominent voices, such as former NATO chief Anders Fogh Rasmussen, have proposed solving this problem by escorting Ukrainian merchant vessels with U.S. or NATO warships. However, the Biden administration has rejected that option for the same reason it declined to impose a no-fly zone over Kyiv: It would put the United States and NATO at risk of a direct war with Russia. A second reason this option is a no-go is that a direct NATO-Russia confrontation initiated by the West would be a severe strain on NATO unity, since escalation is an even bigger red line in many European capitals, including Berlin. And third, it’s unlikely that Turkey—which controls the Bosphorus, the only access to the Black Sea—would allow Western warships to pass. Ankara closed the strait in February to all military vessels not permanently stationed in the Black Sea, including Russian naval reinforcements from the Baltic or other fleets.

There is another, more prudent way to proceed. Instead of challenging the Russian Black Sea Fleet with NATO combatants, the Biden administration should provide Ukraine with whatever military equipment it will take to protect its own shipping lanes, especially unmanned aerial vehicles (UAVs). After supplying Kyiv with HIMARS and MLRS, the transfer of UAVs would not dramatically alter the U.S. approach of providing security assistance. It is important to note that the recent transfer of more potent weapons to Ukraine by the United States, France, and other Western countries has not prompted Russia to escalate the conflict to NATO.

The four MQ-1C Gray Eagle UAVs announced by the Biden administration as part of its most recent $40 billion aid package to Ukraine could break Russia’s blockade. These unmanned fixed-wing aircraft—about twice the size of a Bayraktar and armed with powerful Hellfire missiles or GPS-guided bombs—can fly for about 25 hours at 160 knots, giving them the range and lethality to clear the transit lanes or, by using two Gray Eagles, escort ships between the Port of Odesa and the Bosphorus. (The UAVs previously supplied by the United States—loitering munitions such as the Switchblade and smaller drones such as the Phoenix Ghost—are not large enough to threaten a ship.) Since the original announcement, unfortunately, the Biden administration has blocked the sale of Gray Eagles to Ukraine after officials at the Defense Technology Security Administration raised concerns about the possibility of the Gray Eagle’s advanced radar and surveillance components falling into Russian hands.

Another concern may be the substantial range of the Gray Eagle. There has been an informal consensus among Western allies not to give Ukraine weapons that can strike inside Russia, reflecting NATO’s desire to contain the war. If Washington sticks to this consensus, Ukraine would have to agree not to use the Gray Eagle to attack Russian territory.

The Gray Eagle would allow Ukraine to protect its shipping in the same way MQ-1 Predators protected logistics and other convoys in Iraq and Afghanistan. And against the Russian submarine threat, sonobuoys from P-8 Poseidon aircraft operating from Romania could find Russian Kilos and pass targeting information to the Ukrainians, which would be an extension of NATO’s ongoing intelligence-sharing. Gray Eagles could attack the submarines with GPS-guided bombs, which are more powerful and accurate than depth charges, a technology stemming from World War II. Even if these bombs do not sink the submarine, they will likely inflict damage and cause the submarine to leave the area, allowing a convoy to pass.

On the front in eastern and southern Ukraine, Gray Eagles—along with the recently announced transfers of medium-range air defenses and longer-range missiles—could finally allow Ukraine to fight Russia as NATO would. Ukrainian forces have scored some wins recently by attacking Russian ammunition depots and command posts behind enemy lines. But with a dwindling supply of long-range missiles and Russian forces advancing on multiple fronts, Ukraine needs aircraft like the Gray Eagle to find key Russian command and logistics nodes and attack them at scale with more numerous short-range weapons. While the Russians could, in theory, shoot the Gray Eagles down, Russian air defenses have proved effective against other, slow-moving UAVs, such as the Bayraktar, only by concentrating their sensors and missiles on small areas of airspace. That may be possible in the concentrated battles of the Donbas but not in the vast terrain of Ukraine’s south or over the Black Sea.

Washington needs to rethink its approach to the war. The need to prevent a global humanitarian catastrophe by maintaining freedom of navigation in the Black Sea far outweighs any risk of Russia getting its hands on these U.S. technologies. By strangling Ukraine at sea, Russian President Vladimir Putin is dramatically improving his leverage on land, where he enjoys an overwhelming firepower advantage in a war dominated by short-range artillery. The time has come to break Russia on both fronts. As much as the Biden administration would like to contain the war by limiting Ukrainian access to better weapons, the stakes are already global. Ukraine has pleaded with the West since the start of the war for the tools it needs to fight back and win. Now the rest of the world is counting on it, too.