John Fonte on the need to rein in 'sanctuary cities.' 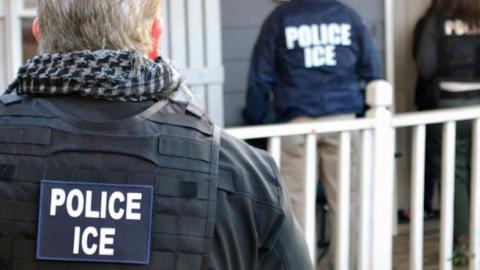 I respectfully disagree with the National Review editors’ comments, following President Trump’s address to Congress, that creation of a new unit in the Department of Homeland Security (DHS) focused on the victims of illegal-immigrant crime “would serve no good purpose.” Actually, the office would serve several good purposes that are directly related to immigration policy, politics, and civic morality.

The “Office for Victims of Crimes Committed by Removable Aliens,” now called “Victims of Immigration Crime Engagement (VOICE),” was created by an executive order on immigration enforcement on January 25 and enhanced in a memorandum by DHS secretary John Kelly on February 20. VOICE is a very appropriate name for this office. For years American families victimized by illegal aliens have been ignored. Because of the misuse of “privacy” rules and indifference, they have been unable to find out whether the criminals who attacked their family members were in the country legally or illegally, or even whether the aliens were incarcerated, deported, or set free.

Secretary Kelly’s memo stated that “criminal aliens routinely victimize Americans. . . . Often, these victims are not provided adequate information about the offender, the offender’s immigration status, or any enforcement action taken by ICE [Immigration and Customs Enforcement] against the offender . . . leaving victims feeling marginalized and without a voice.” The DHS memo declared that the new office would create a liaison with the victims and provide information including the “offender’s immigration status and custody status.” Funds for VOICE would be reallocated from “resources that are currently used to advocate on behalf of illegal aliens,” an Obama initiative, which would be “immediately” terminated. Thus, no major new bureaucracy would be created.

It is to Donald Trump’s credit that he has done what no other presidential candidate, or major American political figure, has ever done, by championing these unfashionable and (for many) inconvenient victims of illegal-immigrant crime (inconvenient because they muddy the dominant media narrative). In contrast to Trump, when the family members of Americans killed by illegal aliens testified before the Senate Judiciary Committee in the summer of 2015, Senators Chuck Schumer (D., N.Y.) and Richard Durbin (D., Ill.) fled the hearing room and returned only after the families had gone. As Mark Krikorian explained, these Americans are “all dead because federal, state, and local governments have abdicated their responsibility to protect American citizens from foreign criminals.”

Let us be clear, “sanctuary” cities/counties/states are at the center of the problem. The president’s executive order declares: “Sanctuary jurisdictions across the United States willfully violate Federal law in an attempt to shield aliens from removal from the United States. These jurisdictions have caused immeasurable harm to the American people and to the very fabric of our Republic.” Indeed, sanctuary cities represent a blatant attempt to nullify federal immigration law in these local jurisdictions. (One might have assumed that the issue of nullification had been settled in 1832–33, when President Andrew Jackson, backed by Congress’s Force Bill, broke South Carolina’s effort to “nullify” federal law within the state on tariff legislation.)

The creation of VOICE is the opening round of a long-overdue declaration of (political) war on the sanctuary cities, counties, and states that protect criminal aliens and then release them into the general population, where they are free (like Kate Steinle’s murderer in San Francisco) to commit even more crimes against Americans. We need to delegitimize the entire sanctuary movement. About 300 jurisdictions (including San Francisco, Los Angeles, New York City, Chicago, and Denver) are protecting criminal aliens and unleashing them into the public. VOICE could provide a powerful weapon against these sanctuary jurisdictions by shining the sunlight of transparency on their transgressions, week after week and month after month.

To more effectively combat sanctuary jurisdictions, more accurate data on illegal-immigrant crime are needed. In a study by the Center for Immigration Studies (CIS), Steven Camarota and Jessica Vaughan noted that “the overall picture of immigrants [legal and illegal] and crime remains confused due to lack of good data and contrary information.” In the future, DHS will collect data, publicize it, and put pressure on the sanctuary jurisdictions. Trump’s executive order promises to, “on a weekly basis, make public a comprehensive list of criminal actions committed by aliens and any jurisdiction that ignored or otherwise failed to honor any detainers with respect to such aliens.”

National Review's latest cover story, by Mark Krikorian and Rich Lowry, rightly points out that we are in a political “war over enforcement” and that it is “imperative that Trump succeed.” What Clausewitz called the Schwerpunkt, the “center of gravity,” in this political war is the occupation of the moral high ground, the commanding heights of the grand narrative that explains the immigration story to the public. The creation of VOICE within DHS is simply one weapon, among others, that immigration hawks should use to seize the offensive from the mainstream media in fighting for an immigration policy that serves, first and foremost, the American people.