Seth Cropsey on the Challenges Facing the U.S. Navy 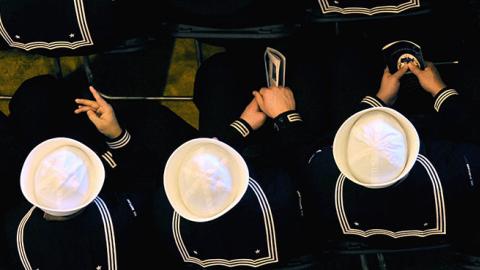 Despite the cold civil war between the American left and right and the internecine struggles within each political party, there are occasional glimpses of agreement on issues as fundamental to the government’s purpose as the nation’s defense.

In the same week of June that the guided-missile destroyer U.S.S. Fitzgerald collided with a Philippine-flagged container ship in the approaches to Tokyo Bay, Senator Roger Wicker (R-Miss.) and Congressman Rob Wittman (R-Va.) introduced a bill that would make it the U.S.’s declared policy to meet the Navy’s goal of 355 ships. Co-sponsors of the bill, called the SHIPs Act, included Senators Mazie Hirono, Richard Blumenthal, Tim Kaine, and Jeanne Shaheen as well as Congressmen Colleen Hanabusa and Carol Shea-Porter. All of these co-sponsors are Democrats. The immediate task is to align the House and Senate versions of the bill.

The larger and more difficult problem is appropriating the funds to increase the size of the fleet from its current 276 combat vessels to the 355 ships at which the legislation aims. Even the Obama administration’s more modest objective of a 308-ship fleet would, according to the Congressional Budget Office, require significant increases in the naval shipbuilding budget over the average for the past three decades.

On one point, however, there can be no quarrels. The U.S. Navy is far over-stretched. When the Cold War ended, the fleet had grown to nearly 600 ships. The Soviet Union’s collapse followed by the attenuation of the successor state’s global naval patrols pointed toward a smaller U.S. fleet.

But facts intervened. Aircraft carriers and their escorts played major roles in both Gulf Wars and in Afghanistan.

China, supported by decades-long double-digit increases in military spending undertook a naval armament program that has produced a growing and increasingly modernized fleet.

Russia reversed its post-Communist era naval decline and is operating in the Atlantic and Pacific and the Black and Baltic Seas. Putin has announced plans to increase significantly Russia’s Pacific fleet. Where the U.S. once operated two carrier strike groups and amphibious ready groups in the Mediterranean, our presence in the region today consists of four guided-missile destroyers based in Spain and a command ship based in Italy. As part of its support for the criminal Assad regime, Russia now has access to Syrian naval ports so that it can maintain a constant presence in the troubled Eastern Mediterranean.

ISIS became a threat that has at various times required naval combat support. Iran, enjoying the financial benefits of the JCPOA, adds to its asymmetric capabilities in the Arabian Gulf. North Korea threatens our island nation allies in the West Pacific with nuclear attack. Meanwhile, the U.S. Navy continues to answer various calls for humanitarian assistance and disaster relief as it is currently doing in Puerto Rico.

The demands for American seapower have increased since the Cold War’s end and the U.S. has continued to cut its seapower. Shrinking defense budgets have left the Navy and Marines scrambling to meet the nation’s combatant commanders’ requirements for naval and amphibious forces. Faced with a growing demand for forces and a diminishing ability to pay for them America’s sea services have looked for ways to save money: keep ships at sea longer, increase sailors’ and Marines’ workload, cut orders for ships, cancel the purchase of ships that would modernize the fleet, and postpone maintenance of critical shore facilities (the Government Accountability Office reported in September that delayed maintenance and restoration for shipyards that service the Navy’s nuclear-powered fleet have increased by 41 percent in the past five years and will cost an additional $4.8 billion dollars over the next two decades).

This slide did not take place overnight. Seven years ago, Vice-Admiral Phillip Baslisle headed a panel that released an official report on the state of the Navy’s surface ships. It found that the surface ships, which are the backbone of the U.S. Navy, had “degraded” over the previous decade. The Baslisle Panel called attention to a scheme in which watch-standing needs were being used to determine the size of ships’ crews, an idea that appears sensible at first, but which did not account for the time and manpower that maintaining a complex warship demands.

The Navy abandoned this dubious approach. But sequestration and the growing need for ships proved just as corrosive. Demand for ships continued rising and the Navy met it, in part, by keeping ships at sea longer. This postponed maintenance and added to the problems that ships returning from deployment face as they prepare to depart for duty again. In fact, money was available for proper maintenance. But time was not—neither for proper maintenance nor training. Demand required ships to return to sea. More time at sea magnified the burden on sailors: the 100-hour work week for sailors that Senator John McCain criticized at a recent Senate hearing is not imaginary.

When Britain was faced with the unexpectedly high costs of the Boer Wars that funds set aside specifically to answer such financial contingencies could not meet, political leaders sought to relieve budget pressures by reducing commitments in the West Pacific and West Atlantic. Rather than raise taxes, resort to debt-financing, or borrow money to support a navy that could defend its global interests, the U.K. began a process of decline that ended the Royal Navy’s global reach and with it, Great Britain’s international pre-eminence.

The U.S. today faces a parallel inflection point today. There is an alternative to cutting corners, economizing, and wringing greater “efficiencies” from an already over-stretched fleet. Absent sufficient funding, the other option is to reduce the nation’s ability to deter conflict, hobble its capacity to keep crises from approaching our borders, and restrict the U.S. Navy’s effectiveness in preserving an order on the high seas that serves the American economy’s interest as globalization proceeds.

President Trump wants action. The SHIPs Act offers him an opportunity to fulfill his campaign promise of a 350-ship fleet, conduct a national security policy that has bipartisan support, and create jobs. All that is needed are the resources to turn Congress’ well-intentional goal into facts.