It's Time for U.S. to Take the Fight to Islamists 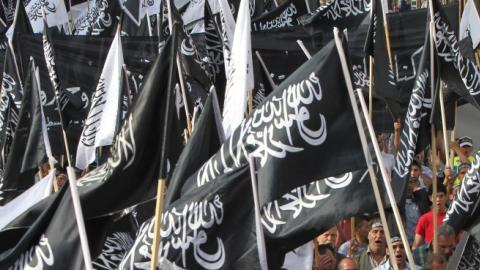 Caption
Supporters of Hizb al-Tahrir, a Palestinian political movement that calls for the return of an Islamic state in the Arabic world, protest on May 28, 2014 in the West Bank city of Hebron. (HAZEM BADER/AFP/Getty Images)

A headline from last weekend screamed that the murder of an ISIS hostage from Japan, like the beheadings of Westerners carried out by the group last year, was "unforgiveable." Two weeks earlier, political leaders around the world expressed their outrage at Islamist terrorists' assassination of the staff of Charlie Hebdo magazine in Paris, and the related murders carried out in a Jewish-owned delicatessen in that city. But mere declarations of the unacceptability of these heinous acts in the name of Islam are not enough. Until policies are stepped up and action is taken to eradicate Islamist terrorism, such statements should be received with skepticism. Until the United States moves against Islamist terrorism - by itself and with the cooperation of allies - it will only get worse.

There are practical steps that American political leaders can take to defeat the Islamists - policy choices that have been available for some time. All entail costs, and all carry risks. But the costs and risks must be borne if the United States is to secure itself and its interests from this growing danger.

First, our political leaders must name the perpetrators of these beheadings, bombings, and sundry acts of terror. The perpetrators are "Islamist terrorists"-not "terrorists," not "militants," not "lone wolves." U.S. leaders, starting with President Barack Obama, need to acknowledge this explicitly. The terrorists do not disguise the fact that they are committing these assassinations, murders, and bombings in the name of Allah. On the contrary, they loudly proclaim it with every act of mayhem in which they engage. American leaders have no standing to deny that they are who they say they are. American leaders must use language that identifies the enemy: Islamist terrorists and jihadists.

Second, and related to the first step, is that U.S. policymakers must accept the direct connection between Islam and most of the terrorism we have been experiencing. There are plenty of passages in the Koran and other Muslim tracts that advocate or justify killing Jews and Christians who refuse to submit. Anyone, Muslim or non-Muslim, deemed to have insulted Islam according to various rules of Islamic jurisprudence, might be flogged, imprisoned or executed. Unlike Jews and Christians, who have addressed arguably comparable biblical language, Islam has not rejected bloodthirsty religious doctrine as a relic of the past. On the contrary, in a significant part of the Muslim world, Islamists find justification in this language. The rest of Islam remains ambivalent about Islamist terrorism - at least this is indicated by Muslim leaders' inaction toward the Islamists among them and by surveys of Muslims. Islam itself must decide to renounce such violence, as a matter of Islamic doctrine, and to demand tolerance of religious beliefs and practices outside Islam. Until it does, U.S. leaders should not characterize Islam as "a religion of peace."

Third, U.S. political leaders should do what they can to support those Muslims in the United States and abroad, who urge their mullahs to modernize Islamic religious doctrine by renouncing words and interpretations of words that justify hatred of non-Muslims. President Abdel Fattah al Sisi of Egypt has bravely asked his country's mullahs to do just that. He and other Muslim leaders who support the introduction of tolerance into Islamic doctrine deserve Western support. It would be wise to seek al Sisi's counsel on what forms of support would help.

Fourth, the U.S. should withdraw its support, including military aid, from any country or entity (such as the Palestine Liberation Organization) that directly or indirectly supports Islamist terrorism. The U.S. should require that any country receiving U.S. support adopt and enforce laws prohibiting Islamist terrorism and support for it, whether at home or abroad. Failure to enact and enforce laws prohibiting its citizens from financing or otherwise assisting Islamist terrorism should disqualify a country from U.S. aid. A country that refuses to vigorously combat Islamist terrorism undermines a U.S.-led war on terror. Identifying and outlawing the terrorists is a first and essential step in the effort to defeat them.

Fifth, any country that supports, directly or indirectly, school curricula or media that preach or condone hatred or violence against people who identify themselves as Christians, Jews or followers of any other religion should be disqualified from U.S. aid. Most of today's Islamists were indoctrinated in the schools of Muslim countries. The United States knows this but has looked the other way. Confronting it now may entail political costs. But continuing to tolerate the extremist curricula of schools in Saudi Arabia and in Saudi-financed schools around the world entails costs as well. The Imams at those schools, and the lessons they impart, continue to develop the Islamist terrorists with whom we are presently at war.

Sixth, U.S. policy should be to use its own military force, and to support other countries using military force to eliminate Islamist terrorists and shut down their havens and training grounds. This too will entail costs. It requires military resources that we have lost because of budget cuts or other funding shortfalls, as well as restoring funds for training essential to preparedness for combating terror. We cannot afford a policy of "no boots on the ground" in this war on Islamist terrorism. We need a larger defense budget.

Seventh, our policy must be that any person engaging in or providing support to an Islamist terrorist operation killing Americans should be hunted down and killed or punished as appropriate - whatever the cost. No more Benghazis, no more beheadings will be accepted. It does make a difference.

Eighth, where useful intelligence may be acquired that could save lives, Islamist terrorists should be captured and interrogated, not killed. The acquisition of human intelligence should be elevated as a priority. Congress and the president should pass legislation providing whatever authority may be necessary to do this. New authorities should be written to protect U.S. military and intelligence personnel responsible for performing any such national service.

We and the rest of the world have reaped the bitter fruits of looking the other way while many Muslims are educated and trained to become Islamist terrorists. Islamist extremists have made war on Jews, Christians, and anyone else who doesn't share their faith and way of life. Our policies must begin to reflect this reality. We are in a war for survival. Continuing to pretend otherwise is what's unacceptable.