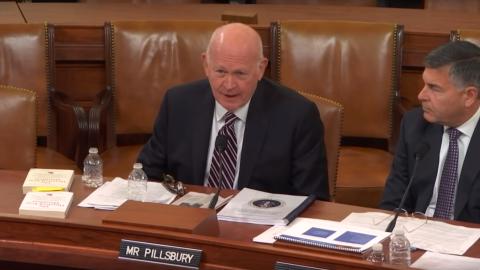 On July 19, 2018, Michael Pillsbury testified before the U.S. House Intelligence Committee on China's threat to American government and private sector research and innovation leadership. Following is his full testimony:

Thank you, Chairman Nunes, Ranking Member Schiff, and Members of the Committee.

Three years ago, I wrote a book warning that China was well on the way to replacing us. It was based on Chinese documents, defectors and interviews. It became an international best seller called The Hundred-Year Marathon: China's Secret Strategy to Replace America as the Global Superpower. I opposed the common view that China was about to collapse.

The Trump Administration and bipartisan actions by the US Congress have suggested that the problems posed by China’s rapid recent rise may be even greater than I had realized. In 2016, the Defense Department under Ash Carter began several initiatives such as the study released in January 2018 called “China’s Technology Transfer Strategy: How Chinese Investments in Emerging Technology Enable a Strategic Competitor to Access the Crown Jewels of US Innovation.” Then, in March 22, 2018, the USTR released a massive study entitled “Findings of the Investigation into China’s Acts, Policies and Practices Related to Technology Transfer, Intellectual Property and Innovation” More recently, on June 19 the White House released a detailed study on “How China’s Economic Aggression Threaten the Technologies and Intellectual Property of the United States and the World.” The Secretary of the Navy Richard Spencer has described a cooperative project with the Secretary of Air Force that has also recommended actions based on national security concerns.

This is clearly a bipartisan national security matter. The four Senators who last month opposed President Trump on the ZTE issue included both Chuck Schumer and Chris Van Hollen.

When I testified last year to the Senate Foreign Relations Committee, both Senators Ed Markey and Tim Kaine were particularly concerned about the issue this committee is addressing today.

We have made a good start toward a new strategy toward China, but we may still be underestimating the problem and China’s resistance to change.

I offer this excerpt from The Hundred-Year Marathon to illustrate just how deeply held China’s strategy to replace us may actually be. So far, China’s reaction to all these government reports has been to deny the accusations of misconduct.

When it comes to trade and growth, America is losing to China, and the reason is simple: China cheats. It steals technology, promotes Chinese monopolies, and unfairly insulates its state- owned companies from foreign competition. For decades, it has broken the rules according to which modern nations trade across national boundaries and treat foreign investment within them. China has played by its own rules, and as its power grows an increasing number of countries will be forced to play by those rules as well.

A core component of China’s successful growth strategy is acquiring, often through illegal means, foreign science and technology. China has set up counterfeiting factories employing ten thousand to fifteen thousand people. China’s national industrial policy goals have the effect of encouraging intellectual property theft, and a massive number of Chinese business and government entities engage in this behavior. So dramatic is intellectual property (IP) piracy in China that a software company sold a single program in China and then received thirty million requests for an update. China is at the forefront of IP theft, and regularly hacks into foreign commercial entities and turns over their IP to Chinese businesses, making China the world’s largest perpetrator of IP theft. This allows the Chinese to cheat their way up the technology ladder. Such IP theft represents an estimated loss of $107 billion in additional annual sales and costs 2.1 million jobs in the United States alone.

In the future, when China’s economy is even bigger, and when its alliances are more extensive, it will be harder to incentivize innovators to invest in the creation of IP whose value is so easily depressed by widespread theft. In addition to forced technology transfers, China tilts the playing field toward Chinese state-owned enterprises. They control numerous economic sectors, and are major players in seven strategically important sectors: defense, power generation, oil and gas, telecommunications, coal, aviation, and shipping. China’s leaders can direct the SOEs with subsidies from massive foreign exchange reserves, so targeting foreign markets will be far more common. From 1985 to 2005, China spent $300 billion to support the largest publicly owned companies. Their access to cheap capital and underpriced inputs is notoriously unavailable to their international rivals, and they are aggressively increasing their outward investment. They are on a hunt to enlarge their markets, exploit natural resources, and create more advanced technology. China has prevailed in creating asymmetry in its market access.

At the heart of Chinese economic policy is a superagency called the National Development and Reform Commission (NDRC). It determines state policy for strategic industries and approves major investments, as well as mergers and acquisitions of SOEs. The NDRC has sweeping powers to impose prices for all consumer goods, from bottles of whiskey to gasoline. The NDRC also appears to be the nerve center of Chinese economic strategy. As China expands even farther into international markets, there’s one thing China’s competitors can count on: China won’t play by the rules.

According to a recent U.S. government report, China continues to raise many nontariff barriers to protect its industries from foreign competition. These barriers include “state trading, excessive domestic subsidies and stockpiling of commodities, discriminatory taxes, uncalled-for antidumping duties, and slow approvals of biotechnology applications for U.S. crops.” All of these violate WTO strictures.

Not playing by the rules pays off. According to one study, a dramatic example of how quickly China has expanded its global market share has been by increasing subsidies and offering tax breaks, cheap land, and technology in four key industries: steel, auto parts, glassmaking, and paper production—all fields where China has no major comparative advantage, including in labor. According to classical free-market economics, this should be considered distorting, inefficient, and costly. But the results proved the opposite. China in a decade overtook the United States to become the world’s largest producer of paper. China achieved more than 30 percent of global glass production, and exports exceeded domestic production. China shifted from a net importer of steel in 2000 to the world’s largest producer and exporter, with 40 percent of the global market.

After 2001 China became one of the world’s largest producers and exporters of auto parts. This was not due to cheap labor, which amounts to less than 10 percent of costs in all these sectors, nor to a deliberately undervalued currency. Needless to say, China did not draw attention to these impressive conquests of market share, nor explain them publicly. China also engages in counterfeiting of non-Chinese products on a large scale. This includes the unauthorized production, distribution, or use of products and their design or key technologies via unauthorized means, without permission.

In 2002, ABC News estimated that foreign firms’ losses due to counterfeiting in China stood at $20 billion annually. Others believe the total is far higher. In a recent speech to the National Association of Manufacturers, Thomas Boam, a former minister-counselor at the U.S. embassy in Beijing, asserted that 10 to 30 percent of China’s GDP is founded on pirated and counterfeited products.65 By some other estimates, pirated and counterfeit goods based on Western products now account for 15 to 20 percent of retail sales in China. In some local markets, the share approaches 90 percent.

A recent U.S. government report from the Office of the National Counterintelligence Executive describes China as “the world’s most active and persistent perpetrator of economic espionage.” China collects sensitive economic information (including trade secrets, patented processes, business plans, cutting-edge technologies, and export-controlled commodities) to support its domestic industries. It does so by using both traditional and cyber-based methods of collection.

40 years ago, China’s leaders decided that to catch up to the United States and other highly developed countries, China would need to join the WTO and obtain loans from the International Monetary Fund and the World Bank.

The supposed willingness of China, a Communist country, to meet the conditions for WTO membership was still justifiably viewed skeptically by many in the U.S. government; as a result, China’s entry into the WTO took fifteen years and was the subject of the most detailed agreement ever made with any new member of the WTO—contrasting strongly, for example, with the far less demanding terms applied to India a few years earlier. China knew that it would benefit enormously by joining the WTO.

But would the Americans let them in? When China joined the WTO in 2001, it agreed to accept the organization’s provisions that member governments not influence, directly or indirectly, the commercial decisions of their state-owned enterprises. However, China has not kept this commitment. All Chinese SOEs operate to serve state objectives rather than respond to market forces, and the Communist Party isn’t shy about directing SOE investments. If a Chinese mining company is directed to exploit a mine in Afghanistan or Angola to expand China’s political footprint, it will do so, even if it must do so at a loss.

One Chinese defector who I named Ms. Lee provided detailed examples gleaned from her access to secret meetings, documenting how China had made false claims from 1995 to 2000 to persuade Congress to grant China permanent normal trade relations and pave its way into the WTO.

Ms. Lee revealed that China’s leaders’ strategy was to leave nothing to chance by aiding those who favored the vote, and suppressing information about their mercantilist economic strategy. They reasoned that if Congress knew that a free market was off the table for the foreseeable future—if not forever—the vote would not pass. They launched a program of propaganda and espionage that was more sophisticated than anyone in the U.S. intelligence community suspected. She explained in detail how China had studied American political fault lines to exploit divisions within the U.S. foreign policy community, using as a guide an old essay by Mao Zedong from the 1930s about how to analyze political differences.

Among the key messages China sent then were that the SOEs would be phased out, free market policies would be forthcoming, China’s currency would not be manipulated, China would not accumulate large trade surpluses, and America’s innovations and intellectual property would, of course, be respected.

WTO membership requires all this. Also, during the debate over China’s admission to the WTO, the China Initiative failed to persuade President Clinton to insert conditions into the trade deal to influence the fates of two thousand to three thousand Chinese political prisoners. The House of Representatives approved trade normalization on May 24, 2000, by a vote of 237 to 197.28 The Senate followed suit, giving its approval on September 19 by a vote of 83 in favor.