Russia Can Still Be Defeated, but Time Is Running Out 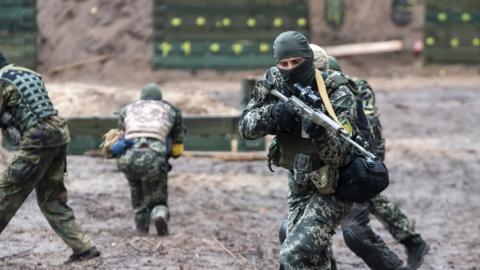 Caption
Members of the Ukrainian Territorial Defense Forces participate in tactical exercises in the forest near Kyiv, Ukraine, on July 13, 2022. (Maxym Marusenko/NurPhoto via Getty Images)

Former Secretary of State Henry Kissinger caused a stir in May when he asserted that, to achieve peace, Kyiv must cede land to Moscow. While realpolitik may one day force Ukraine to consider difficult tradeoffs, we should not assume that Vladimir Putin initiated this war simply to redraw boundaries. He launched this offensive to subordinate Ukraine to Moscow, thoroughly and irreversibly.

After his initial plan to decapitate the Zelensky government failed, he switched tactics, now following an exhaustion strategy based on the use of heavy artillery. But he remains committed to his goal of subjugating Ukraine.

And he has the means to succeed. His easiest route to victory is to cut Ukraine’s access to the sea through Odesa, either by conquering the city or placing it under permanent blockade. Without Odesa, Ukraine will become landlocked and bankrupt. If Putin achieves that goal while continuing his offensive in the east, which has been going on for more than a decade, he will win.

The North Atlantic Treaty Organization members have been providing military support on an ad hoc basis, without reference to a clear military goal and a well-defined concept of operations. It’s almost as if NATO expects the Ukrainian military to model its tactics on whatever weaponry NATO countries happen to be sending this month, regardless of how the situation on the battlefield has evolved.

The key to forcing Putin to abandon his strategic vision is to neutralize Russian artillery—which is the Russian war machine’s greatest strength and the source of its greatest vulnerability, namely, logistics.
As ammunition moves from railheads to rear areas and then on to the guns themselves, it follows a torturous route replete with very inviting targets. A strategy based on disrupting Russian logistics would focus on five lines of effort:

* First: Increasing the supply of advanced multiple-launch rocket systems such as HIMARS. These systems allow Ukraine to strike the Russian rear area and, thereby, avoid getting stuck in an artillery duel that Russia will inevitably win in the long term.

* Second: Improving Ukraine’s drone capabilities. Drones offer deep-strike capabilities, which complement the job of multiple-launch rocket systems, and they potentially pose a danger to the Russian navy, which dominates the Black Sea coast.

* Fourth: Exploiting a design flaw in Russia’s main battle tanks: their lack of defense against top-attack weaponry. Up to this point, the supply for NATO countries of top-attack weapons has served Ukraine well. There is no need for change, but the West should potentially expand the volume.

* Fifth: Conducting a large-scale counteroffensive. The Ukrainian military is unable to expel every Russian soldier from Ukrainian territory. It must, however, target a specific place, Kherson, with a major blow. Kherson is key because it governs the approaches to Odesa.

Defeat on the battlefield is the only way to persuade Putin to abandon his intention to subordinate Ukraine. A diplomatic approach without military backing will be viewed in Moscow as weakness. It will embolden Putin to continue squeezing Odesa until Ukraine will eventually capitulate. We must not fool ourselves into believing differently.

Read in Inside Sources.