Shangri-La: The Silent Rebellion of the Small Powers 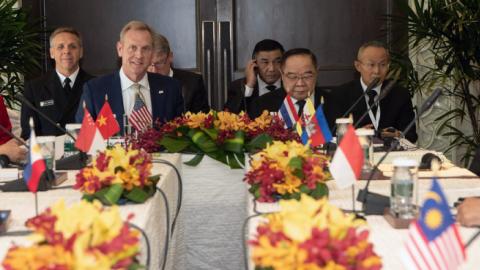 The 2019 Shangri-La Dialogue was expected to display fireworks between the United States and China.

The U.S. announcement of its free and open Indo-Pacific strategy and China's decision to send its defense minister for the first time in eight years set the scene for a wrestling match between the two strategic competitors.

However, the fireworks never came. Indeed, we got a manifestation of the different positions of Washington and Beijing on issues such as Taiwan, the South China Sea and Huawei and 5G. But there was not much interest in putting on display these conflicts by challenging each other in public.

Acting U.S. Secretary of Defense Patrick Shanahan said that what we are witnessing now is not a face-off between the United States and China. Instead, negotiations are taking place on how to prevent military conflict. China's defense minister responded by emphasizing that the militaries of the two powers were acting as stabilizers in the relationship. The fireworks were left to closed-door meetings outside of the public eye.

What is the reason for this self-restraint? Of course, one reason could be that Washington and Beijing are not interested in rocking the boat at a time when they are sounding each other out for a breakthrough in the ongoing trade war. On the other hand, the United States and China seem to be in for the long haul on the trade war, and a defense ministers' meeting is not the main arena for settling this issue.

Another, more subtle reason, which ran as an undercurrent of the speeches of smaller powers, was spelled out by Singapore's defense minister Ng Eng Hen at the very end of the meeting, when half the delegates had already left the dialogue. He said the challenge for the United States and China is to offer acceptance of their dominance beyond military might. If their policies are lopsided against other countries' interests, these countries will seek other partners.

Ng Eng Hen's statement came after a string of defense ministers had gone out of their way to point out that they were not taking sides in the U.S.-Chinese strategic competition.

Vietnam's defense minister Ngo Xuan Lich spent a lot of his speaking time emphasizing the excellent platforms for creating a sea of cooperation provided by the Association of Southeast Asian Nations, although ASEAN has little to show for itself when it comes to bringing down tensions in its own home region, as demonstrated by the volatile situation in the South China Sea.

Britain's newly appointed defense minister Penny Mordaunt tried to reassure China by arguing that since the aircraft carrier HMS Queen Elizabeth's visit to the United States in 2018 was not seen as a threat, nor should its visit in 2022 to the South China Sea be considered as such. Mordaunt's clumsy attempt to convince China that the U.K. will seek to balance relations with the United States and China reflects a general concern among smaller countries to deny being part of U.S. counterbalancing of China. French defense minister Florence Parly mentioned that France had sent its carrier Charles de Gaulle to the Indo-Pacific in 2019 as a force for stability, working with key strategic partners of France such as Singapore, India, Australia, Japan and the U.K., while downplaying the role of the United States and China.

The tendency in Washington and Beijing to try to force allies and partners to choose sides has been growing in the past year. The latest example is the U.S. announcement that Washington cannot share sensitive intelligence with countries that allow Huawei into their telecommunications network. At the same time, China is adopting sanctions against countries such as Australia and New Zealand that have already decided to exclude Huawei. These pressures to choose between Washington and Beijing encourage France, India, South Korea, Singapore, Russia, Australia, Japan and others to look to each other for alternatives to the United States to avoid being caught in the crossfire between the two competitors.

Ng Eng Hen framed this tendency as a warning to the United States and China that they are putting global peace and stability at risk by their unwillingness to compromise on issues of disagreement. However, the tendency for other countries to form alternative partnerships to avoid becoming great power dependents may in fact be what is needed to preserve international order.

For example, the European Union-Japan trade agreement sent a strong signal to the U.S. against unilateralism. The 2019 memorandum of understanding between South Korea and India reflects Seoul's need for partners that will help them pursue diplomatic engagement with North Korea. The rapprochement between Australia and France reflects that Canberra looks for new security partners in the South Pacific.

If looked at separately, these are all small or medium powers that can do little to change the ways of Washington and Beijing. But if added up, together they form a formidable force that can change the trajectory of U.S.-Chinese policies from a preference for bullying their partners and each other to a greater willingness to compromise.