Asymmetric warfare describes the ancient effort of one side to exploit the other’s systemic weakness. So long as submarines can crawl along beneath the waves, unseen, unheard, and undetected by other means, surface targets—from naval vessels to merchant ships to targets on land—will be vulnerable to this most asymmetrical of platforms. Taiwan has sought for decades to possess a submarine force to deter and if necessary, defend itself against, a possible Communist Chinese blockade or amphibious assault.

Fifteen years ago, a newly-inaugurated President George W. Bush changed long-standing U.S. policy. He agreed to sell eight diesel submarines to Taiwan. This was sensible. The PRC had engaged in an ambitious program of placing ballistic missiles across the Taiwan Straits in increasing numbers annually, modernizing their ability to conduct amphibious warfare, and supporting it with a growing fleet of land-based fighters and bombers.

There was, however, a practical problem with President Bush’s decision. The U.S.’s entire submarine fleet was—and remains—nuclear-powered. The last diesel-powered U.S. submarine had been decommissioned 11 years before Bush agreed to sell diesel subs to Taiwan. It had been built during the final years of the Eisenhower administration. Since then, the industrial capacity that supported construction of U.S. subs had shifted entirely to the manufacture of nuclear-powered boats.

Confronted by a host of obstacles, Taiwan announced in late 2014 that it would build its own submarines. Taiwan created the Indigenous Defense Submarine (IDS) program to accomplish this. The CSBC Corporation, Taiwan, established a submarine development center in Kaohsiung to support the IDS program.

Taiwan’s geographic location in the middle of the first island chain, as well as its democratic political institutions, and the large volume of trade between it and the U.S. are critical and essential elements of the interest that Washington and Taipei share in assuring Taiwan’s security. The PRC’s growing number of submarines—more than 70—underscore the importance of the IDS program.

Hudson Institute held a conference earlier in October that examined the need for asymmetric options to defend Taiwan. The IDS program was part of that discussion as were other possible asymmetrical approaches to Taiwan’s defense.

Dr. Martin Murphy discussed the larger geopolitical strategic context of Chinese aggression against Taiwan. He began with three assertions: Taiwan is the key to preventing China’s breakout into the Pacific; it is against the U.S. and other democratic countries’ interests for the PRC to break out into the Pacific; and that a “free and secure” Taiwan is important to the United States’ regional interests in the same way that a “docile and unfree” Taiwan is to the Chinese Communist Party’s regional interests.

Dr. Murphy rejected the assertion that China is unwilling to use military force to obtain its strategic objectives, although the PRC has been wary of competent and determined opponents. However, he qualified this by stating that China has preferred, since Deng Xiaoping, to obtain territorial concessions through either soft power, diplomacy or economic market access; or subversive, stealthy coercion, political pressure, diplomatic isolation, coercive dependency, political bribery, etc. China already uses these methods against Taiwan: “diplomatic isolation; commercial denial, especially arms; economic dependency on mainland markets and tourism.” China has also increased and professionalized the use of coast guard, fisheries enforcement, and maritime militias to further encroach without being directly held responsible, seeking to push Taiwan towards an overreaction that would result in an armed confrontation. The use of these soft power and “grey-zone” methods, however, does not mean that China would preclude a full-fledged conventional war to obtain its objectives, should alternatives be exhausted.

According to Dr. Murphy, China’s activities in the East and South China Seas are directly driven by a strategy designed to isolate and threaten the independence of Taiwan, as Taiwan is instrumental for Chinese power projection and transforming the First Island Chain from a containment barrier to a “jumping off point” into the Pacific. To further this, Murphy sees China closing its littoral zones to commercial and military traffic as part of its One Belt One Road initiative, after the land-based portion is complete.

Bryan Clark laid out the military threats that any large scale PRC incursion against Taiwan would necessarily entail. He emphasized PLA superiority on the sea surface with anti-ship missiles (ASCMs), fast attack craft, attack submarines, and in the air with surface-to-air missile systems that cover the entire Strait and island, a large and growing fleet of advanced fourth and soon fifth generation aircraft, and tactical ballistic missiles capable of delivering payloads from the mainland. According to Mr. Clark, the Chinese would likely impose a blockade of the island, before launching an amphibious invasion.

Admiral Tom Brown (ret.) further emphasized the “overwhelming capacity of the PRC as a major concern that Taiwan must overcome. He stressed four potential ways China might act aggressively against Taiwan: the PRC could conduct limited ballistic missile strikes to coerce Taiwan, large-scale military operations aimed at Taiwan’s military capabilities to deter pro-independence actions or prepare for an invasion; a direct invasion from the sea using amphibious or airborne landing forces; or attacks to damage Taiwan’s infrastructure combined with a blockade to cripple the country’s economy. Brown also emphasizes that Taiwan cannot compete with the PRC numerically in terms of platforms, including in a blue water naval contest.

Recommendations: How Taiwan can deter or counter China

All three panelists agreed that Taiwan needs to rely on and improve its asymmetrical capabilities in order to deter or blunt the Chinese advantages. Dr. Murphy, providing a more general, strategic perspective emphasized that the “challenger” state, China, would necessarily have the advantage in any contest. Thus, Taiwan will need to regain the initiative in a “counter-punch” strategy, forcing the PRC to know that its probes will be met with unanticipated responses. For Murphy, this includes three elements: acceptance by the Taiwanese that they are being engaged asymmetrically, formation of a response strategy that can be coordinated with the military together with all appropriate government agencies, and existence of a non-military or paramilitary force that can respond rapidly to Chinese incursions. Murphy further proposed that Taiwan greatly increase its maritime monitoring capabilities--drones, satellites, maritime patrol craft, and EW operations. This also includes bolstering coast guard capability and capacity while acknowledging they are limited in their ability to respond to substantial escalation.

For sea denial, both Clark and Brown recognize the PRC will dominate the surface with its navy and seek to deny access for Taiwanese ships through its anti-surface missile capabilities. To counter this, Taiwan needs to further develop its undersea forces, including augmenting its domestically produced diesel attack submarines (SSKs) with the immediate goal of building or procuring eight boats (Brown), and also fielding smaller subs “to provide a survivable ‘picket line’ and targeting information to land-based strike systems” (Clark). Both experts recommend the introduction of unmanned systems, such as UAVs, UUVs and USVs, to provide ASW (anti-submarine warfare) against PLAN submarines that are capable of threatening Taiwanese surface and commercial vessels.

Brown argues that Taiwan should consider production of stealth frigates to offer a cost-effective surface option that can provide sea denial far from the PRC coast, while Clark recommends that Taiwan acquire 1000+ mobile, land-based ASCMs to combat Chinese surface vessels. To counter low-level provocations by the PRC, Brown, a retired U.S. Navy SEAL, also argues that Taiwan’s special forces should be prepared to intercept and board suspect vessels that violate Taiwan’s territorial waters to determine whether the vessels are surrogate military vessels. Slides below: 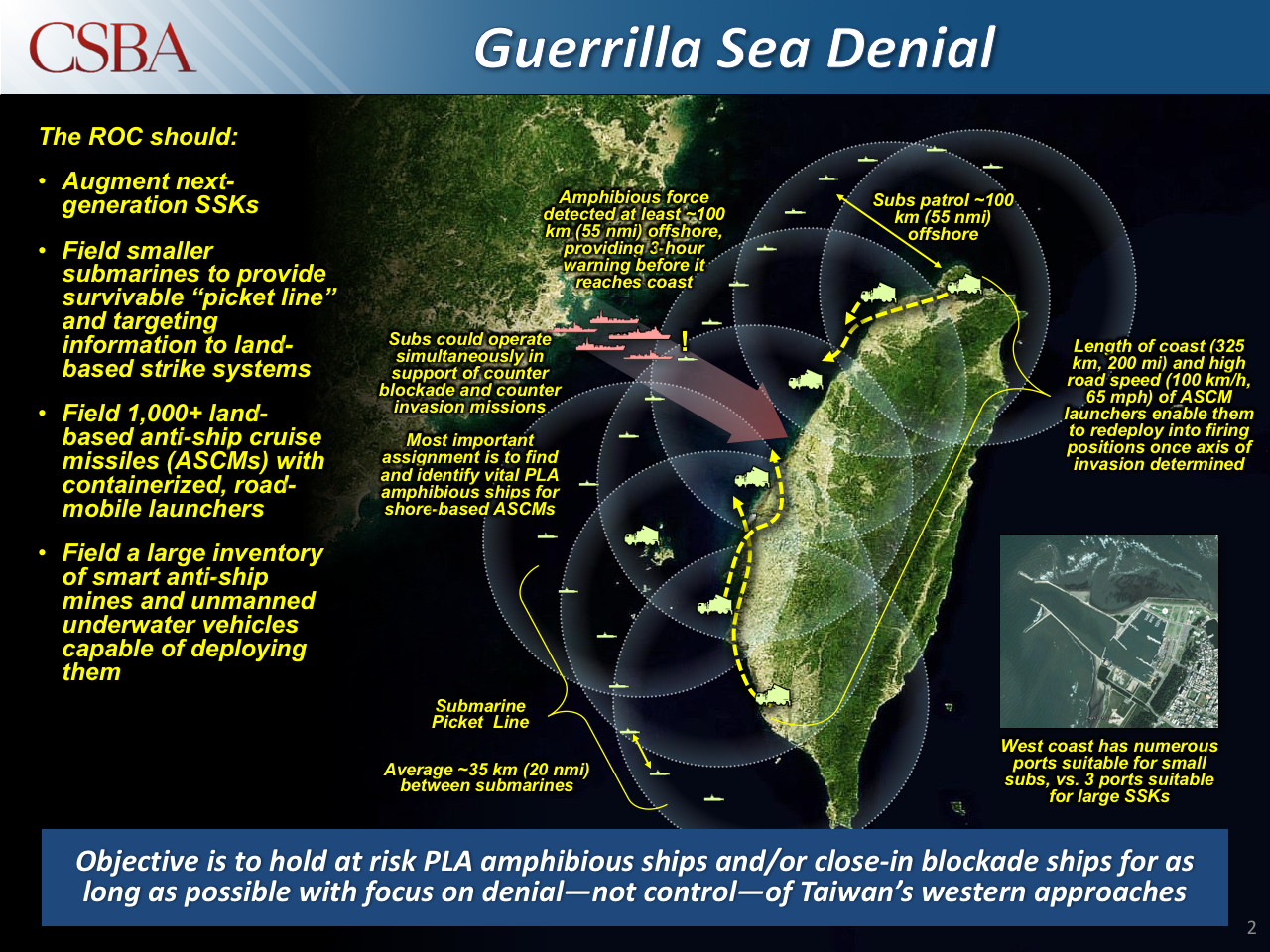 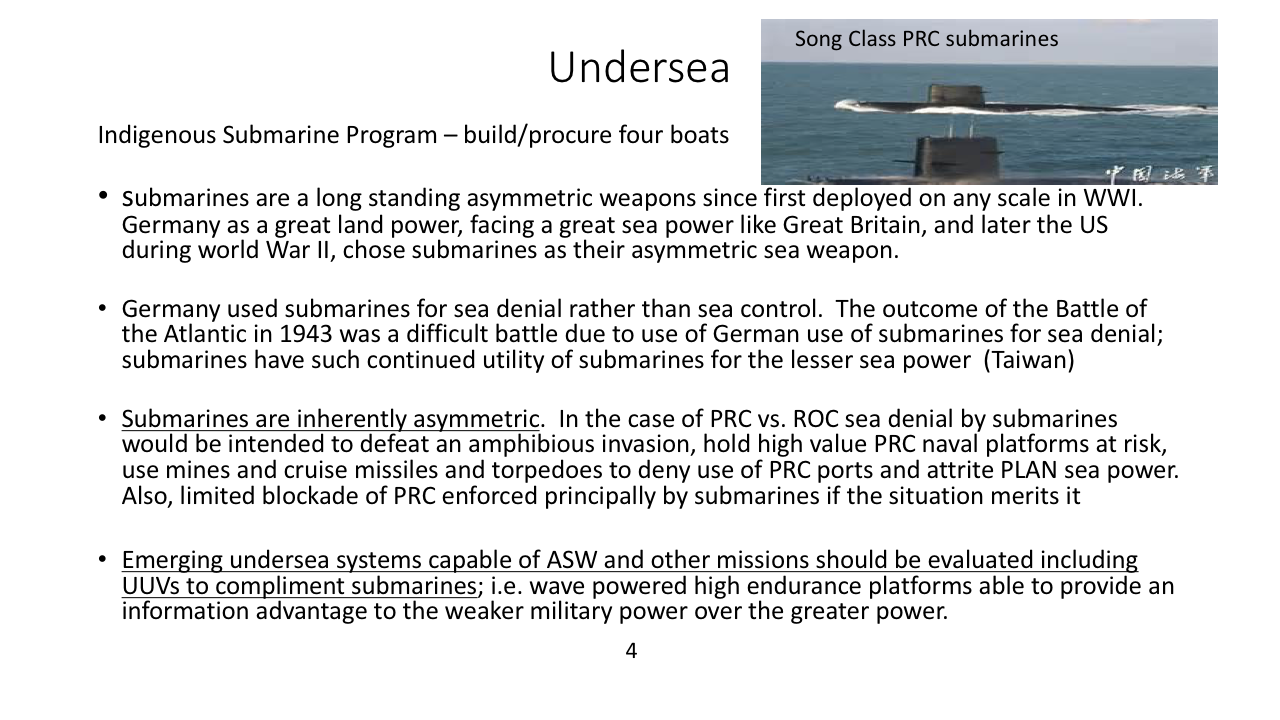 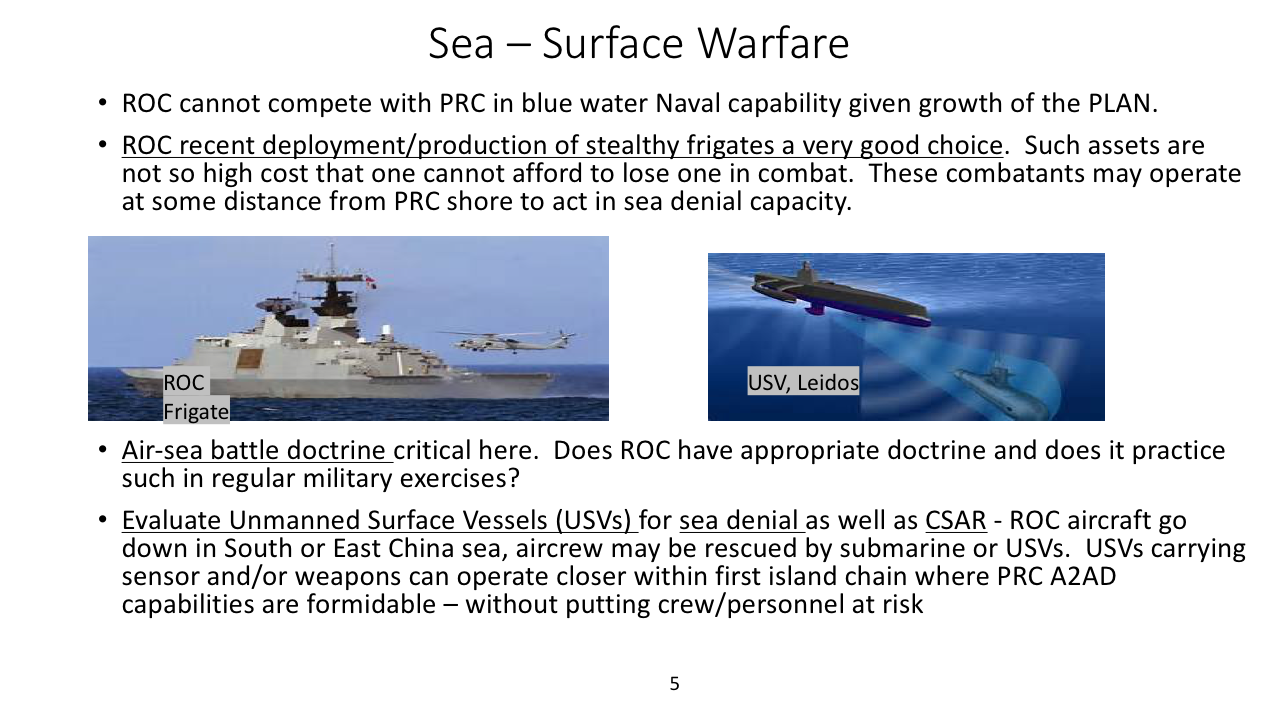 Both Clark and Brown emphasize the need for information/cyber and deception tactics as important strengths Taiwan can use to strengthen opposition to a Chinese assault. Brown recommends the use of cyber capabilities to disrupt PRC C4 (Command, control, communication, computers) and electronic warfare (EW) to bolster attack aircraft capabilities and disrupt the PLA from targeting civilian and military infrastructure. Clark and Brown both recommend that camouflage, concealment, and decoys be used, such as dummy SAM and ASCM systems, or boneyard F-16s from the United States (Brown), to force the PRC to waste “high cost weapons.” Cargo container-hidden SAMs, decentralized (“starfish” model) command and control, and dispersed and hidden ground and naval forces would complicate China’s efforts to destroy them. 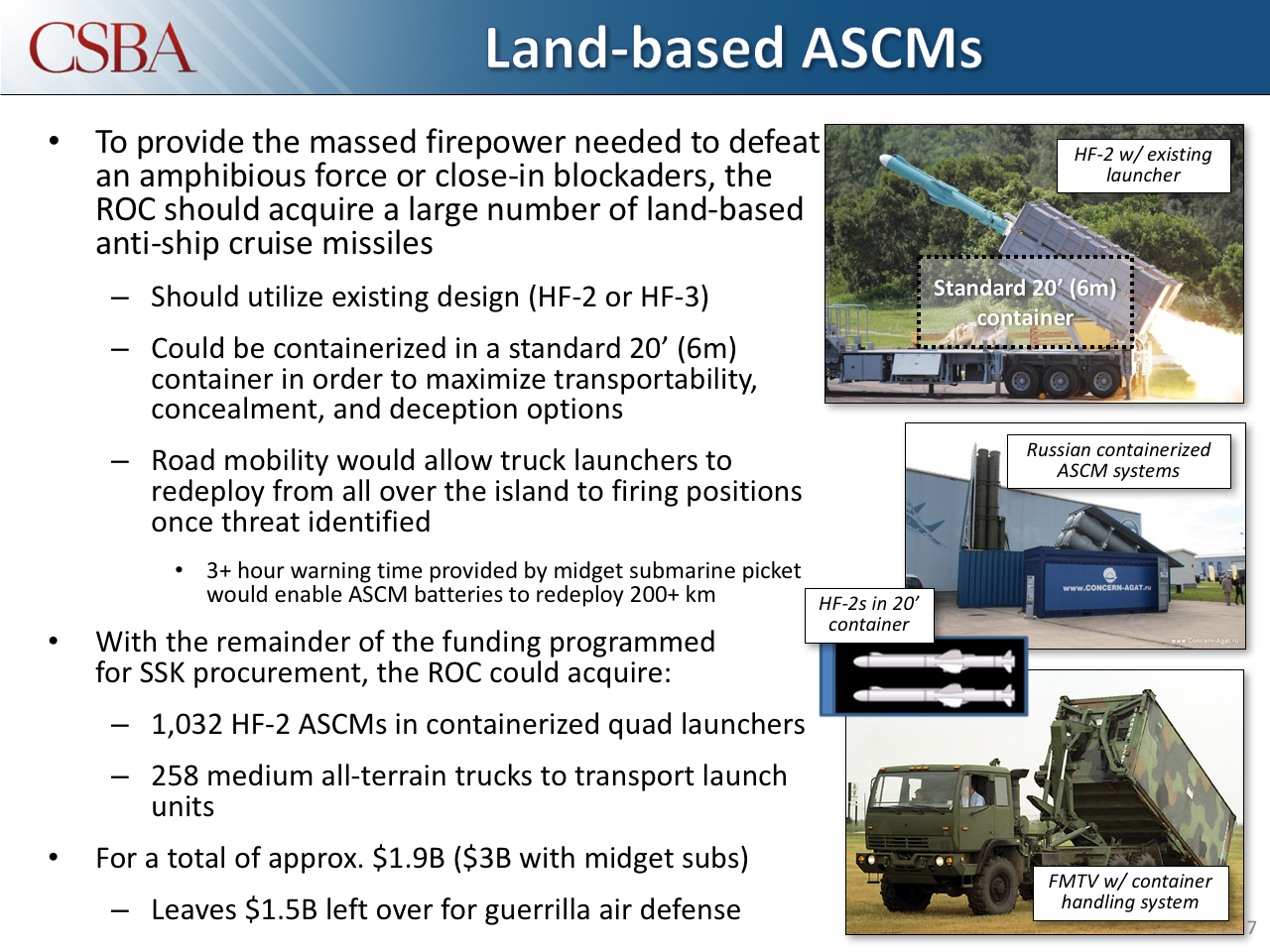 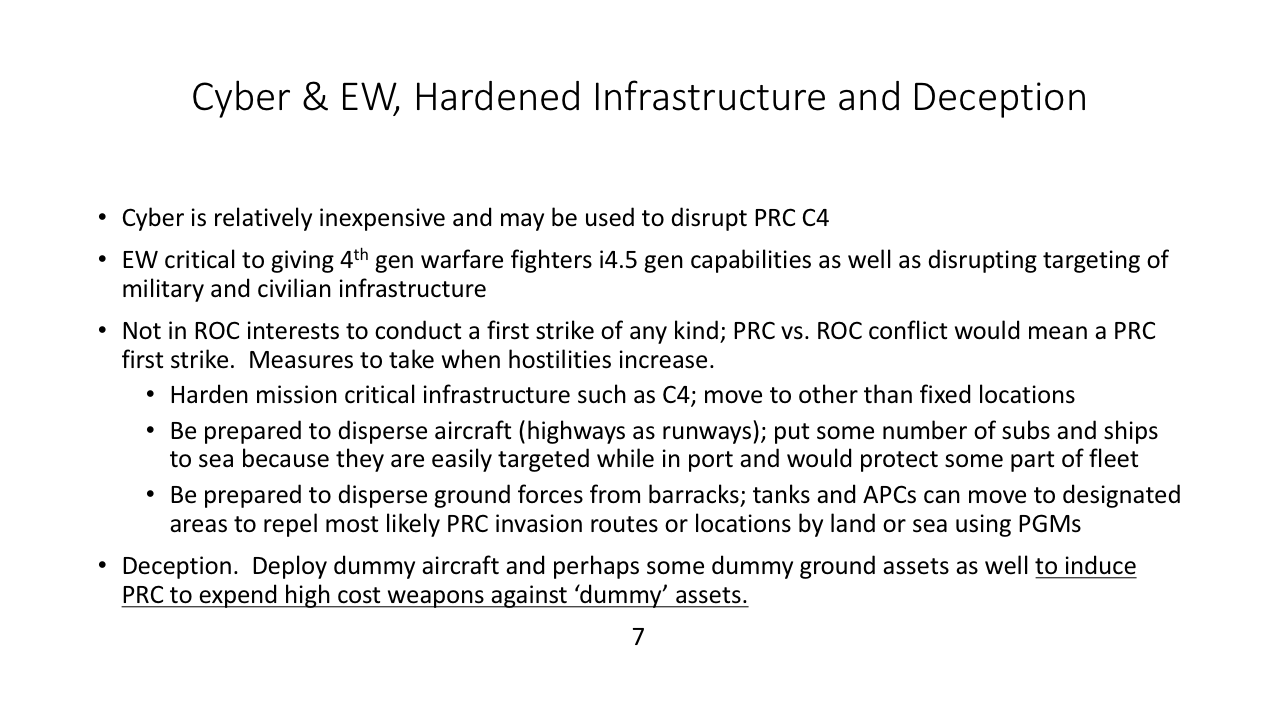 Bryan Clark lays out recommendations for Taiwan’s ground forces, a “layered ground defense” in order to fight in an asymmetrical fashion and inflict greater damage on invading PRC forces. To this end, he suggests emphasis on mobile, light forces, rather than mechanized units, to conduct irregular warfare. These units would need to be armed with guided rockets, artillery, mortars, and missiles (G-RAMM), including anti-tank guided missiles (ATGMs) and man-portable anti-air systems (MANPADs), and be able to fight autonomously from a command structure. 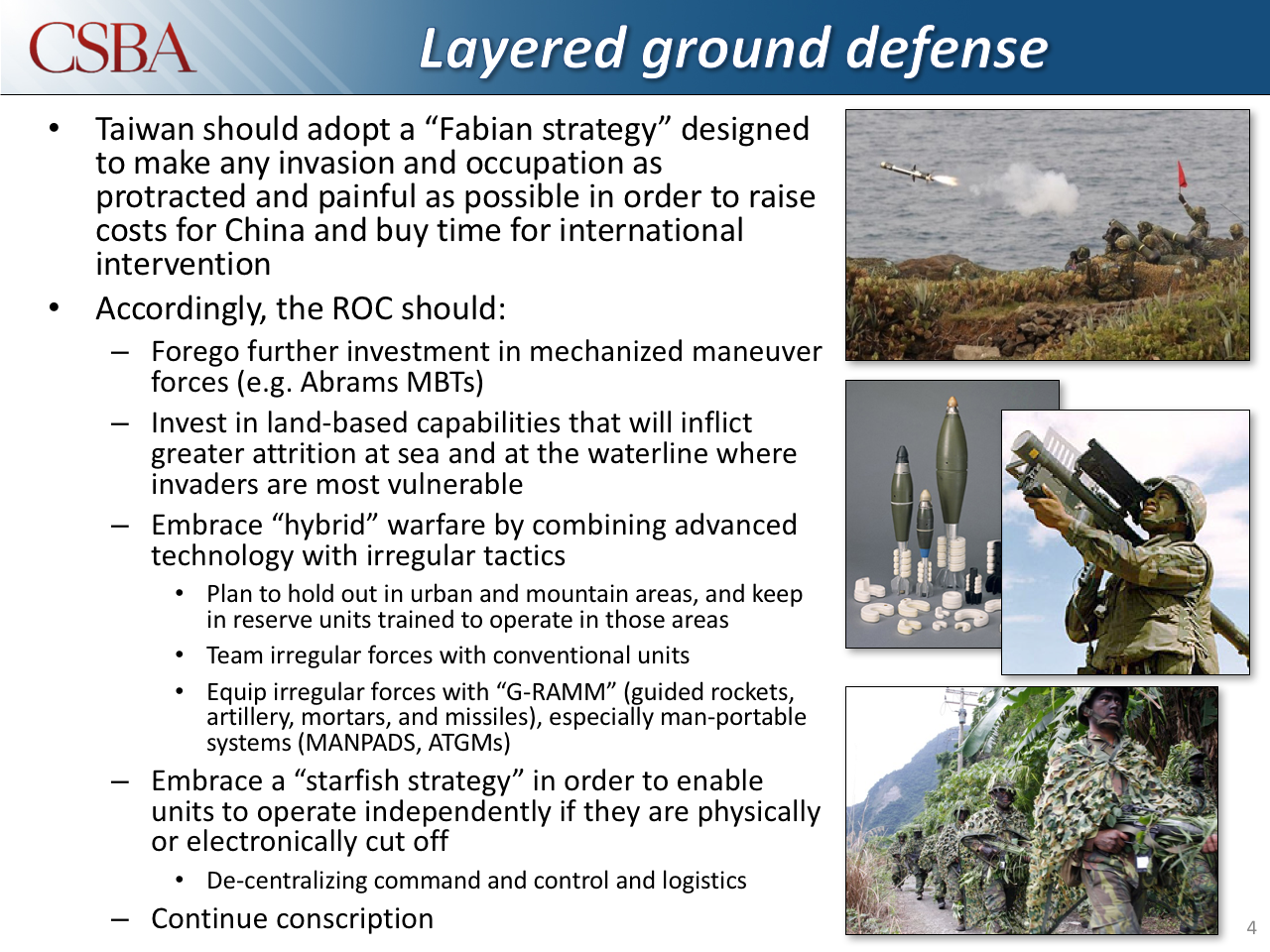 Adm. Brown and Mr. Clark both call for surface-to-air missiles to deny Chinese planes access to Taiwan’s airspace, and interceptors to counter Chinese ballistic missiles. Brown calls for the acquisition of additional anti-air weaponry. Clark argues Taiwan should work to improve air defenses, including mobile missile systems. The overall objective of these air defenses should be, according to Clark, “to complicate, disrupt, and protract PLA air ops to the maximum extent possible,” citing the examples of North Vietnam and Serbia.

All three panelists, Murphy, Clark, and Brown, agree that the proposed defensive measures for Taiwan are delaying actions. If Taiwan faced a full-scale PRC invasion, it would require the assistance of the United States and regional actors. Murphy states that Taiwan holds the political advantage, as all states in the Asian littoral have the common aim and response to Chinese aggression. Brown concedes that, while it is not in the U.S. interest to enter into a large-scale conflict with China, it would be able to provide information, from satellites and other sources, and unmanned drones in order to deter China from starting a fight. Clark calls on Taiwan to invoke a Fabian strategy to make any invasion and occupation as painful and costly as possible in order to buy time for international intervention on Taiwan’s behalf.