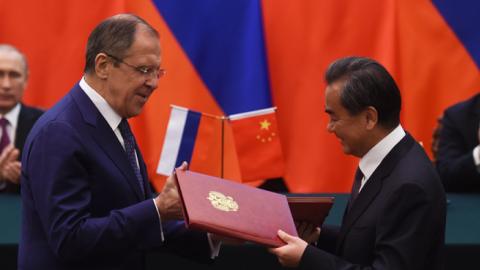 +5 Key Takeaways+
# Russia and China’s relationship is increasingly strengthened by arms sales, joint military exercises, and mutual diplomatic support. With growing frequency, the two countries hare expressing joint concern towards “threatening” U.S. military capabilities and security policies.
# China’s growing ability to deny foreign navies access to waters and airspace is connected to the sophisticated defense platforms provided by Russia.
# Vladimir Putin and Xi Jinping are seeking a closer defense partnership, which could take the form of integrated military operations, collaboration on battlefield technology, or a joint missile defense system.
# Through joint military exercises, China is learning from Russia’s military experience in Crimea, gaining operational knowledge on expeditionary logistics and how to protect military bases in foreign countries.
# In 2021, the Sino-Russian Treaty of Friendship expires. Its renewal could introduce new dynamics to the China-Russian relationship, and the possible inclusion of collective defense provisions like those between the U.S. and Japan.

Over the last three decades, China and Russia have developed an increasingly close military relationship built on arms sales, joint military exercises, and other mutual defense ties. Moscow has supported Beijing’s military ambitions by providing sophisticated weapons platforms to the People’s Liberation Army (PLA). These weapons transfers have bolstered China’s air defense, anti-ship, and other critical capabilities in significant ways. In particular, they have enhanced the PLA’s capability to threaten foreign navies and air forces in the waters and airspace near China. Most recently, the S-400 surface-to-air missile batteries and Su-35 fighter planes that Russia sold to the PLA could target drones, jets and ballistic missiles over much of the western Pacific. Meanwhile, the joint drills and other Sino-Russian military engagements have allowed the PLA to learn valuable skills from the more combat-experienced Russian armed forces.

What could the future of China and Russia’s defense partnership entail? Both Chinese President Xi Jinping and Russian President Vladimir Putin seek a closer defense partnership, which could come in the form of more extensive exercises or defense industrial collaboration. Furthermore, Chinese-Russian military action may come in the form of a combined effort to suppress an Islamist insurgency in a Central Asian country, using a sectoral approach of concurrent but separate military operations.

Yet the Sino-Russian security relationship is limited in important ways. It is noteworthy that Beijing and Moscow do not fully endorse each other’s recent military moves to advance their contested territorial claims. Beijing has not overtly endorsed Moscow’s annexation of Crimea or creation of separation regimes on Georgian territory, while China’s expansive claims in the South and East China Seas have not received formal Russian diplomatic support. Both countries are concerned by the risk of becoming entangled in each other’s military conflicts with third parties.

The United States and its allies must nonetheless plan for future military contingencies in which China or Russia could exploit U.S. conflicts with one of them to achieve gains at U.S. expense. In the case of a NATO-Russian conflict in Europe, U.S. allies in Asia will need to prepare for Chinese opportunistic aggression, while the converse would prove true regarding Russia during major Sino-U.S. confrontations in Asia. The Russian government has already displayed its proclivity—in Georgia, Ukraine, and Syria—to employ military force to achieve strategic targets of opportunity. The Chinese government could well make similar calculations in the future.