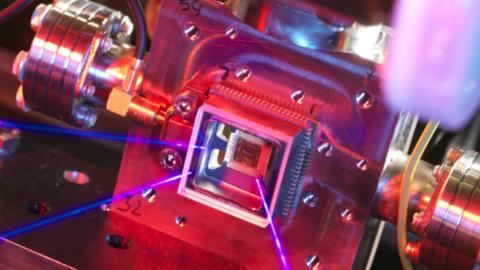 Industry first. QAI knows that the reason the U.S. is leading the race to the world’s first quantum computer is due to the power of free markets and American industry. The Initiative seeks to continue promoting a landscape in which private industry leads the world in developing a universal quantum computer, ensuring that undue regulations do not inhibit innovation while encouraging mutually beneficial private-public partnerships.

National security first. Because a future quantum computer will be able to hack into and disrupt nearly all information technology, the development of quantum technology is not merely a scientific and economic consideration, but also a strategic national security concern.

Whereas much of the economic incentive to develop a quantum computer lies in the private sector, market forces have not and will not catalyze industry to develop quantum cybersecurity in the necessary timeframe. Because of the security threat to the power grid, food and water supply, and defense networks, the United States government must take a central role in actively developing, commercializing, and implementing effective quantum cybersecurity measures, before the advent of a quantum computer powerful enough to hack into asymmetric encryption.

Such cooperation will allow the U.S. and her allies to fulfill the goal of realizing the world’s first universal quantum computer in a free, democratic society. This will effectively secure critical information in advance of the grave security threats posed by a quantum computer.

For example, one of the QAI’s initial efforts has included founding the U.S.-Canada Quantum Alliance with the cooperation of the University of Waterloo, Ontario and its “Quantum Valley.” The goal of the alliance is to generate—through reports, conferences, and strategic partnerships—a close cooperation between lawmakers, policy-makers, technologists, and industry leaders in both countries, for developing joint policies and pooling present and future resources in order to win the quantum race.

The eventual goal of the U.S.-Canada Quantum Alliance is to provide a model for an ever-expanding Quantum Alliance with other quantum-savvy allies such as Australia, Great Britain, and the countries of NATO, as well as Japan, Israel, and South Korea.

**With such overarching goals in mind, QAI continues to explore the following critical issues related to quantum technology and strategic policy:**

* The role of the federal government and makeup of public-private partnerships
* Necessary allotment and allocation of federal funds
* Requirements for STEM education and workforce training in quantum technology
* Ways to speed up the commercialization of quantum research
* Developing compliance and compatibility standards for quantum cybersecurity
* The relationship between quantum cybersecurity and intellectual property
* The balance between classified and unclassified research
* The intersection of quantum with emerging technologies such as artificial intelligence, 5G, blockchain, autonomous systems, and more