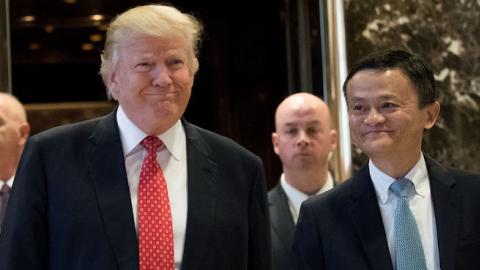 BEIJING -- The election of Donald Trump as the 45th president of the United States has raised new questions about the future direction of U.S.-China relations more than any election in recent history. None have been more perplexed and uncertain about what this means for the future of the world’s most important bilateral relationship than foreign policy observers and officials in Beijing.

The change in U.S. administration comes at a particular sensitive time for China’s leadership. The message from Chinese delegations visiting the United States and conveyed via state media is that the Trump administration would be well-served to avoid provoking China, especially in the near-term. A sudden escalation in an already strained relationship could harm the prospects for President Xi Jinping’s reelection scheduled for October 2017. According to Chinese media reports, Xi will be especially inflexible while he has to fend off his own domestic critics and secure political power from inside the Communist Party, especially among hardline factions.

This past week, Beijing breathed a sigh of relief that Secretary of State-designate Rex Tillerson told the Senate Foreign Relations Committee January 11 that there are “no plans to alter the One China Policy.” Better still was Mr. Trump’s public comment earlier in the week while standing next to Chinese billionaire Jack Ma that Ma’s Alibaba might be able to create one million new jobs for Americans by selling U.S.-made products through the massive Chinese e-commerce platform. It’s also worth noting that Mr. Trump himself has never called for direct confrontation with China; merely tough negotiations.

“When dealing with China,” Donald Trump declared in his 2016 campaign book Great Again, “we should stand up to them and remind them that it’s bad business to take advantage of your best customer.” In the same book, he wrote of his admiration for China’s negotiating skills, and said he wanted to appear “unpredictable” to the Chinese. In this, he has richly succeeded. His tweets have caused the Chinese state media to issue unusually defiant warnings that Beijing is “invulnerable” to a trade war and that “core” issues of sovereignty are “non-negotiable.”

When China issues warnings like these, it heightens the stakes for negotiations and raises the specter of a misunderstanding or miscalculation on China’s part. But because of the new “strategic ambiguity” of the incoming administration—or “unpredictability” as Mr. Trump would call it—there is a possibility that China may make once unthinkable concessions toward what is likely to be the new administration’s most important demand for a new bilateral relationship: eliminating its unfair trade practices and reducing our trade deficit. After all, President Xi Jinping has already claimed he opposes all protectionism by any nation, as recently as his major speech in Lima, Peru in November. In December, China’s State Council approved measures to expand foreign investment in banking, securities, insurance, and futures trading, and hinted other sensitive areas will be opened up, including telecommunications and the Internet. This is a small step toward abiding by international trade norms that require full reciprocity in bilateral investment.

As the world’s second largest economic superpower, China holds the key to boosting American growth. Indeed, China, perhaps more than any other country, can help us create jobs, stimulate investment, and drive growth. But that requires China take a sharp turn away from its brutally mercantilist policies that advantage its workers over ours and flout the norms of international trade. It requires ending China’s unfair trade practices and making trade compromises. China’s policies rank it as the worst offender on the ITIF’s Global Mercantilist Index.

Niall Ferguson has sagely argued in The American Interest that China can be part of a stable World Order among the five members of the UN Security Council, if Washington and Beijing can avoid confrontation. Indeed, the risks of a global conflagration between two of the world’s biggest and most well-armed nations are too great to consider any other alternative. It’s also why in the short-term, we should pursue a time-limited policy of avoiding conflict with China. There are six areas of outsized importance to President Xi and the ruling elite that have been revealed in Chinese publications and by delegations seeking insight into the future Trump administration.

1. The “One China” Policy and Taiwan
Nothing has received more treatment in the Chinese media about Donald Trump than questions about future U.S. support for Taiwan and the possibility of renouncing America’s long held “One China” policy. It is China’s number one fear. Trump was correct that there is no treaty or binding agreement, only a series of non-binding communiqués that deal with the issue vaguely. Trump did not directly oppose the longstanding understanding on Taiwan. He merely pointed out, on Fox News Sunday December 11, that “I don’t know why we have to be bound by a ‘One China’ policy unless we make a deal with China having to do with other things, including trade.” His comment creates leverage in China’s eyes because the Chinese know he is essentially correct, that the U.S. never formally conceded Taiwan to China. Rex Tillerson’s testimony this week that there are no plans to alter the One China Policy comes closer to President Trump actually committing himself, which the Chinese know must be done by each new President.

Beyond the larger question of “One China,” the sale of arms is another source of Chinese anxiety involving Taiwan. Beijing claims the U.S. has no authority to deal with the government there at all, let alone provide weapons. Not surprisingly then, President Obama for years denied Taiwanese requests for the sale of 55 F-16 jet fighters. Taiwan now wishes to purchase our new F-35 jet fighters. By not granting Taiwan’s request, President Trump would be doing China a great favor.

2. Tibet: The Dalai Lama and the Exile Government
One of China’s longstanding demands is a ban on White House meetings with the Dalai Lama. No official U.S. representative was sent in 2011 for the inauguration of the democratically elected Tibetan prime minister. As President, Trump could decline to meet with the Dalai Lama. He could also imitate his predecessor by merely “privately” meeting with the Dalai Lama and having him leave the White House through the back door amidst piles of trash, then release a photo of the embarrassing scene, as Obama did. The Dalai Lama has already held a press conference at which he stated his desire to come to Washington to meet President Trump. The Chinese have specifically asked that this visit by the Tibetan leader not take place. The U.S.’s approach to the Dalai Lama—and Tibet as a whole—is one of several sources of Chinese anxiety.

3. India: Arms Sales and Border Disputes
China claims a large province of North India: Arunachal Pradesh. Beijing calls it “southern Tibet.” Indians have been engaged recently in a military buildup to protect this province. They have asked other countries to support their claim to the territory. So far, the U.S. has not taken a position, despite subtle advances from Indian Prime Minister Modi. Interestingly, Modi’s election platform in 2014—as Trump’s new chief of strategy, Steve Bannon, pointed out at the time—was part of a rising global, populist movement. The Indian media has suggested that Modi seeks an early meeting with President Trump. The topics of the Chinese territorial claim and the Chinese military buildup against India in the past decade would clearly be on Modi’s agenda. Whether President Trump supports India’s claim to Arunachal Pradesh and continues U.S. arms sales to India already requested by Modi—now America’s largest customer of weapons—is another Chinese worry about the coming year.

4. Missile Defense for South Korea
If deployed in South Korea, THAAD missile defense interceptors and Lockheed Martin’s SPY radar system could reach deep into China’s territory, up to 1,800 miles. The system would cover China’s ICBM fields targeted on the U.S., so Beijing is frustrated because its nuclear threat could be entirely neutralized. The US media reports the current plan is to deploy 48 missiles in South Korea, not nearly enough to stop all Chinese ICBMs, only a few North Korean missiles. If Mr. Trump decides to increase the number of missiles, he would be adding a degree of protection for America against China’s long-range missiles. China already knows that he has this card to play.

5. South China Sea
The Chinese express hope that in 2017, and in contravention with decades of established policy and practice, Mr. Trump could agree with China and halt American operations for freedom of navigation alone or with other navies. They want Trump to agree with China’s rejection in July of the findings of an international tribunal at The Hague that considered Beijing’s claims in the South China Sea. The wildcard actor has been Rodrigo Duterte, president of the Philippines, who visited Beijing and negotiated billions of dollars in company-to-company deals.

6. China’s Trade Objectives
Few things invoke as much fear in China’s investment community as the powerful inter-agency committee, CFIUS (Committee on Foreign Investment in the United States). It determines, with assistance from the intelligence community, whether or not to permit Chinese requests for investment in America. Congressional proposals to strengthen CFIUS aim to block purchases by Chinese state-owned enterprises, such as Beijing’s 2014 purchase of Virginia-based Smithfield Foods, a deal opposed by many U.S. Senators. Currently, CFIUS’s red lines for denying Chinese investment are somewhat ambiguous. The acquisition of commercial property and private real estate—such as the 2014 purchase of the Waldorf Astoria by China’s Anbang Insurance Group—has been permitted. Presidents are not usually involved in these transactions. But they could be for the purpose of advancing American interests.

There are plenty of other areas in which the Trump administration can creatively seek cooperation and avoid confrontation as it engages with Beijing. Chinese visitors say Trump should seek to make both China and American great again. Perhaps President Xi can meet President Trump’s requests for fair trade without violating his publicly stated opposition to protectionism. Without such progress, both sides will suffer, there will be no stable global order, and we will descend into a destructive spiral that Henry Kissinger has long warned need not happen.