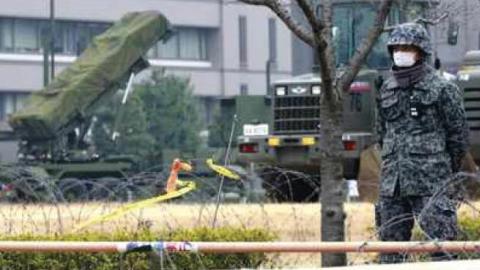 The allies’ continued focus on destroying enemy missiles, however, doesn't address the fundamental problem of long-range defenses like Aegis Ashore: the weapons needed to intercept a ballistic missile in the upper atmosphere are as large and usually more expensive than their targets. This cost exchange makes sense for a distant country like the United States that will face only small North Korean or Iranian missile attacks. However, a nearby neighbor like Russia, China, or North Korea could easily reach Japan with enough ballistic missiles to overwhelm the number of interceptors Tokyo can afford.

The focus on ballistic missile defense also ignores the significant threat from cruise missiles. Launched from adversary territories, ships, or aircraft, cruise missiles are less expensive and more numerous than their ballistic counterparts.

Shorter-range interceptors like the U.S. Patriot would be less expensive than Aegis’ SM-3s and could address both ballistic and cruise missiles. However, they cover small areas and are thus only appropriate to defend critical targets like command centers. So, how should Japan protect the hundreds of military facilities, civil defense shelters, and government buildings that need to survive a missile bombardment?

Passive defenses offer a potential solution, especially if combined with high-capacity active defenses that could be available in the same 2022 timeframe as the now-canceled Aegis Ashore. The goal would be gaining an advantage in the “salvo competition. For example, essential facilities could be "camouflaged along with their air defenses, whereas expendable buildings could be made to look like attractive targets, including the installation of decoy air defenses. As a result, an adversary may need to increase the number of weapons used to attack both sets of targets or take longer to decide what to engage and perhaps lose the initiative.

Hardening has been considered ineffective against nearby adversaries because short-range ballistic missiles can carry warheads large enough to penetrate the maximum practical thickness of standard concrete. That appears to be changing with the advent of affordable ultra-performance concrete. Today, most U.S. and allied bunkers use concrete that can withstand up to several thousand pounds of pressure per square inch (psi). Ultra-high performance concrete can absorb more than 20,000 psi and reach twice that in some applications. Although significantly higher than conventional concrete, ultra-performance concrete's cost would be affordable as part of a missile defense portfolio and is coming down with more commercial development.

In a salvo competition, the need for more weapons may dissuade an enemy seeking a quick decapitating strike. On the defender’s side of the competition, hardened facilities, along with camouflage and deception, could reduce the amount and sophistication of missile defenses needed and, therefore, their cost.

Gaining an advantage in the salvo competition can also change the character of the attack and defense. Make a hangar hard enough, for example, and perhaps all a missile attack can do is pin down or delay the deployment of bunkered airplanes. The attacker then would need to use bombers with larger weapons to destroy bases and aircraft. Bombers would be easier targets for missile defenses like Patriot, which could be sheltered during the initial missile attack and rolled out to engage bombers during follow-on airstrikes. In some regions, passive defenses may be the primary missile defenses and active defenses used only to attack enemy aircraft.

Hardening every target isn’t currently practical and would be prohibitively expensive. Deciding what to harden and how to complement hardening with other passive defenses and shorter-range hard-kill active defenses like Patriot, or eventually, lasers are the critical analysis needed for allied defense planning in the wake of the Aegis Ashore cancellation.

Armed with the answers to these questions and new technologies such as directed energy weapons or ultra-performance concrete, the United States and its East Asian allies could plan a coordinated defense against Chinese and North Korean missiles and face the threat at a lower cost and with more confidence than military planners in Tokyo or Washington currently enjoy.