Three Steps to Win — or Avert — a Pacific War With China 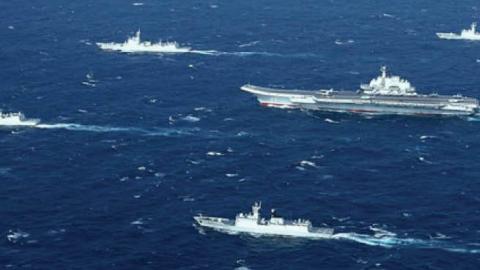 August 20 marked the conclusion of China’s three-day live-fire exercise in the East China Sea, following a summer of increasing provocations. These included yet another Chinese violation of the Taiwan Strait’s de facto border between Taiwan and the mainland. China also attempted to isolate Taiwan throughout the COVID-19 pandemic, planting a fake news story about Taiwanese racism towards the World Health Organization’s director and, since its coup in Hong Kong, threatening to forcibly “reunify” Taiwan with the mainland.

Chinese saber-rattling should not be mistaken as simply a complex form of communication or domestic propaganda. COVID-19 provided Beijing with opportunities to consolidate power. But it also confirmed its worst fears — that the West will not ignore blatant Chinese duplicity. No longer can Chinese multinationals portray themselves as outward-looking, profit-driven capitalist companies divorced from the party-state.

Even reliable European partners, most notably Britain and Germany, have begun to curb their economic contact with Beijing and escalate their anti-China rhetoric. As political pressure grows in the West to depend on supply chains in friendly states, China’s access to Western consumer markets will diminish. It will need to look for economic alternatives — a tall task for a nation already seeking to transform its economy in the next decade without liberalizing, and while convincing its people that the only alternatives are either foreign domination or China’s domination of foreigners. In this, Taiwanese-style democracy can have no place. War — or its credible threat, as well as short-of-war “gray zone” tactics — is the best or only way out of these political contradictions. With force, Xi Jinping expects to eliminate what he sees as the threat of Taiwanese democracy and to monopolize the South and East China Seas’ trade routes.

The future of warfare is difficult to forecast. Contemporary conflicts can provide clues, but the precise interaction between thousands of new technologies — employed by a single combatant or between belligerents in high-end conflict — will not be known until war begins. Nevertheless, such clues are critical if we are to predict the future of war and plan accordingly.

On Feb. 27, Syria and Russia conducted strikes against Turkish positions in Idlib as part of a broader offensive, killing at least 34 Turkish soldiers. Retaliatory Turkish airstrikes destroyed, among other targets, 33 armored vehicles, five helicopters, 23 artillery pieces and a missile battery.

Neither Turkey nor the Assad regime and Russia achieved significant tactical or operational goals before a March 6 ceasefire. But the brief exchange demonstrated air superiority’s crushing effects in modern conflict. Fourth-generation fighter aircraft with enough intelligence, surveillance, and reconnaissance support can threaten even modern anti-aircraft systems like Russia’s Pantsir, fielded in 2012.

The United States has become accustomed to a specific kind of war. Casualties are expected to be light although, as the Iraq War’s “surge” demonstrated, Americans can accept casualties if the sacrifice produces results. But Americans are not used to fighting wars during which its enemies destroy major U.S. assets. American soldiers in Iraq and Afghanistan fought knowing they had uncontested command of the skies and seas; forward positions were subject to intense attack, while our enemies used asymmetric means to pressure major installations. But the traditional sinews of American power — aircraft carriers, large surface combatants, amphibious ships, so-called Air-Land Superbases — have been immune from attack.

If the adversary is China, the U.S. cannot expect the same result. China is an asymmetric threat only to the extent that it cannot field a carrier fleet like the U.S. But the tools of modern combat — modern air, sea and long-range ground combat — will be missiles launched from ships, submarines, ground- or carrier-deployed aircraft, and land-based launchers. Moreover, the early phases of a Pacific war would occur within range of Chinese land-based aircraft and missiles.

In the most likely scenario — an armed quarrel over Taiwan that spirals into a broader Pacific war, or intentionally begins as one — China will seek to neutralize Taiwan immediately. The longer Taiwan survives, the harder it becomes for China to respond to an additional threat from the U.S., Japan or other allies. A surviving Taiwan becomes a staging base for long-range missiles, allowing a coalition to neutralize the Chinese navy, threaten the Chinese mainland conventionally, disrupt Chinese force movements and begin dismantling Chinese air bases.

Considering the likelihood of U.S. intervention, one can expect China to make two operational choices in a war’s opening hours. First, it will rely on missile barrages and a portion of its air wing to overwhelm Taiwanese defenses and pummel its air bases. Second, it will retain enough in reserve to mount an offensive against, or respond to, a major counterattack by an American Carrier Strike Group.

If a war broadened to include the U.S. and Japan, China likely would seek to terminate the conflict as rapidly as possible. A long war carries severe risks for Chinese society; as the natural patriotism of conflict dilutes, the system will be hard-pressed to justify the extreme economic and physical costs of great-power war. By striking the key nodes in America’s military network — the historically protected aircraft carriers and superbases that undergird American power — China hopes to disrupt and damage the U.S. enough to consolidate its gains and to stress an American economy unprepared for swift and massive defense production.

Gaining air superiority over Taiwan is clearly central to any Chinese strategy. The American and allied response must be to prevent this or, at a minimum, raise the costs of gaining superiority to a high enough level that China must commit its reserves. Given the realities of modern air combat, the U.S. can take several immediate steps to deny China the quick victory it needs.

First, it can forward-deploy air defenses in the Ryukyu Islands in concert with Japan. Less important than aircraft are anti-air missile systems and early-warning radars that allow the U.S. to shuffle forces as rapidly as possible.

Second, the U.S., in concert with its allies, must develop survivable ground-based air defenses — mobile enough to be concentrated where necessary while avoiding enemy detection or surviving multiple hits. Moreover, the system must be cheap enough to be fielded in large numbers, perhaps by distributing and networking radar nodes across an area of operations.

Third, U.S. Indo-Pacific Command will benefit from greater cognizance of Taiwanese contingency planning. Taiwan has a limited modern fighter fleet of F-16s; it relies on much older F-5s for outer-island air defense, particularly to the south. China understands this. Indeed, it is reasonable to assume that China’s cross-strait provocations and carrier operations this summer were intended not only to intimidate but to test Taiwanese interceptor deployments. U.S. forces must understand these Taiwanese deployments both to cover Taiwan’s defensive gaps and to identify the most likely points at which Chinese fleet groups will concentrate to create an operational breakthrough on either side of the island.