The Obama administration’s much publicized “Pivot to Asia” is not a strategy for dealing with China. 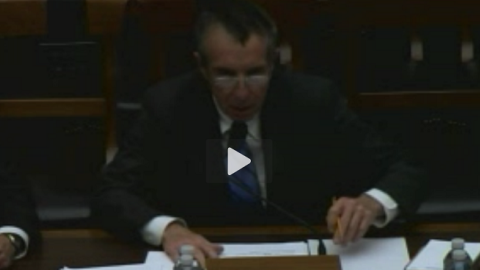 It is an honor to speak before this subcommittee. Thank you for your invitation.

As dangerous as the threats posed by jihadism are, so far they don't approach the risks of open confrontation between the US and the Soviet Union in the Cold War. But the likelihood is that we'll again face a larger challenge than the one the jihadists now present. No one is a better candidate to offer such a challenge than China, which is not to say that China is an enemy, or to predict that China will become an enemy. But it's clear that Chinese leaders are ambitious, and that their diplomatic policy and their military armament are moving them toward great power status, or at least regional hegemony, in a series of small steps designed to achieve those ends with minimal resistance from their Pacific competitors, America's allies. And the U.S. is not taking this possibility as seriously as it should.

This is different from the America of the 1920's and 1930's, when the generation that had experienced a World War learned the hard way why strategy was needed to be prepared for whatever the future might bring. Then, the U.S. anticipated a potential future threat from Japan and acted to prepare for such a threat. In what was known as War Plan Orange, the U.S. military leadership devised and tested a concrete strategy for a potential conflict with Japan, which evolved with new technology and tactics during the interwar period to incorporate the critical roles of aircraft carriers and submarines, amphibious warfare, and an island-hopping campaign in any potential Pacific conflict.

The linchpin of this plan was the doctrine of "advanced base" strategy, the idea developed and exhaustively tested in the interwar period that a Pacific conflict with Japan would be won by securing the outlying archipelagos and islands of the theater by amphibious assault that would secure American bases from which to launch offensive operations further and further into enemy territory. At the same time this would deny the enemy territory from which to do the same. As a result, the U.S. military had a strategy when such a conflict broke out, one whose familiarity to officers improved its execution and which was in fact highly successful. We have no such strategy towards China today.

Diplomatically, the closest we've come is the long-standing effort that's existed since the administration of George H.W. Bush to persuade China to become a stakeholder in the international system. One of the most fundamental principles of that system is respect for untrammeled navigation through international waters and airspace. The events of the past few weeks, as China declared an Air Defense Identification Zone over a large section of the East China Sea, show that they have no such respect. So, while efforts to persuade China to become a stakeholder in the international order should not be abandoned, we ought to understand that those efforts have proved of limited value in generating any positive effect on Chinese international behavior. To the extent that any American strategy hangs on our and the international community's attempt to transform China into a state that accepts the general principles of the international order, it has been a failure.

The Obama administration's much publicized "Pivot to Asia" is not a strategy for dealing with China. It's an idea which, if sensibly implemented, would preserve and increase our influence in the region. But so far, all the hard power of the pivot is a minor element of the administration's preference for using soft power. The hard power consists of a Marine contingent in Northern Australia that remains much smaller than the envisioned 2,500 Marine rotational force, 4 littoral combat ships to be based in Singapore, and a U.S. military budget that is being whittled away at a rate that alarms our allies in Asia and the rest of the world. A successful "Pivot to Asia" would require more cooperation, especially with our Asian treaty allies, the most important of which is Japan. In the current and potentially risky matter of the People's Republic's recently-declared air defense identification zone (ADIZ), Japan has said that its commercial airliners would not identify themselves when passing through the airspace in question. At the same time, the US State Department has urged American commercial flights to comply with the zone. This is not cooperation.

China, by its own admission and actions, wants to deny us access to large parts of the Western Pacific. The Defense Department's response so far has been a set of ideas known as the Air-Sea Battle (ASB). The ASB itself is a plan for greater cooperation between the military services in gaining access where a potential enemy would deny it. Much like the administration's "Pivot," or "rebalance," it is not based on a strategy, and it is not a strategy towards China; in fact, it makes no mention of China at all.

China's leaders are more tolerant of risk than the Soviet leaders were. The ASB talks about blinding a potential enemy's surveillance, reconnaissance and intelligence capabilities. In China's case, this would mean striking targets on the mainland. But the U.S. is not doing anything to turn the access denial ideas of the ASB into a strategic plan for such an eventuality. There are other possible strategic approaches to the same problem of access denial. However, the first question that needs to be considered is, what is the objective of any strategy towards China? The answer is the same as our objective in World War I, World War II, and the Cold War. In each of those, our objective was to prevent the rise of a hegemonic power on the European continent. With China, our objective ought to be to prevent the rise of an Asian hegemon, a power that would destroy the current U.S. alliance system in Asia, dominate the world's most populous region—economically and militarily, and perhaps extend itself into Eurasia and beyond.

As in the U.S.' experience in Europe, our first diplomatic objective in executing a strategy that seeks to prevent the rise of an Asian hegemon should be to establish an alliance of likeminded nations. This is very difficult, because of ancient enmities in the region. But as the threat from China grows, current realities may eclipse historic fear. An important part of U.S. strategy towards China should be to prepare the groundwork now for such an alliance, one which establishes contingencies for repatriating allied business interests on the mainland back to allied countries, so as to exert economic pressure on the PRC in the event of a conflict. As for the immediate problem of access denial, which does indeed require strategy to counter, there are approaches which don't require an attack on China's mainland. One would be to destroy the Chinese navy at Sea. Another would be to impose a blockade on Chinese merchant and naval shipping. Like the ASB, neither of these are being looked at as possible military strategies toward China.

What is clear is that any strategy to counter China's increasing access denial capabilities should prioritize deterrence—which means readiness, sustainability, and overmatching firepower and defense—and be built upon an integration of the ground forces necessary to control the outlying islands, archipelagos, littorals and straits of the Pacific with the naval and air power necessary to control the air and seas. Such a strategy should also include an increased focus on missile defense, to protect civil and military infrastructure, sea and airports and mobile warfare capabilities, and it should, above all, be designed to give the U.S. the power to assemble a durable forward defense in the event of a long war.

But, however one regards these strategic ideas the fact remains that we don't have any strategy toward the most populous nation in the world, one whose economic strength is gathering in tandem with the military power its leaders are gradually accumulating to match their ambitions. My colleagues who are testifying here this afternoon are offering a thoughtful account of the hardware that supports those ambitions. This needs to figure in our strategy—as it clearly does in China's.

Thank you for the opportunity to address this committee.