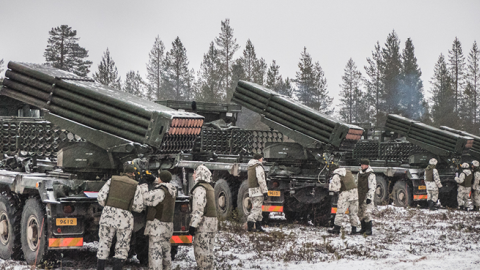 Two months ago, the North Atlantic Treaty Organization took the momentous step at its summit meeting to invite Sweden and Finland into the alliance. Since then, twenty-three of NATO’s thirty members have ratified the decision, putting both countries on the cusp of admission. Although Turkey may yet delay matters over a political dispute, it will not stop enlargement altogether. Sooner rather than later, Sweden and Finland will join NATO and receive the ironclad security guarantees that rest at the heart of the alliance.

As summer turns to fall, this constitutes one of the most strategic developments of the first six months of the war in Ukraine.

Given long-standing US concerns about European free-riding, Americans can be forgiven for asking what it is getting in its two new allies. Put simply, their admission into NATO creates new defense options. Over the past two years, Russian dictator Vladimir Putin has taken increasing control of his western neighbor, Belarus. His larger goal is to use Belarus as a springboard to isolate NATO’s three Baltic members: Lithuania, Latvia, and Estonia. Between Belarus and the Russian exclave of Kaliningrad lies a small corridor 100 kilometers (sixty miles) wide that is the Baltic States’ only overland route to the rest of NATO. By absorbing Belarus, Putin is placing his boot on the Baltic States’ windpipe.

Sweden and Finland’s accession to NATO will relieve that pressure overnight. With hundreds of miles of new coastline in the Baltic Sea, NATO will possess a variety of options to support its easternmost members. Instead of operating from the faraway Danish island of Bornholm, for example, NATO can garrison the Swedish island of Gotland, which sits much closer to the Baltic coastline. For its part, Helsinki, the capital of Finland, is only eighty kilometers (fifty miles) across the Gulf of Finland from Tallinn, Estonia. Instead of worrying about Putin extinguishing the Baltic States, it is Kaliningrad that will be isolated.

Similarly, in the high north, Sweden and Finland are two of only eight Arctic powers—seven of which will be members of NATO once enlargement is complete. Again, it will be Russia that will be politically isolated. This is urgent because the Arctic is becoming an arena of intense competition, especially as ice melt reconfigures the region.

In recognition of this fact, the US Army published the first Arctic strategy in its history last year under the title “Regaining Arctic Dominance.” Indeed, the United States is now far from dominant in this region. For example, Russia vastly outnumbers the US Coast Guard’s handful of icebreakers. Sweden and Finland’s accession to NATO, however, will push the alliance to give the Arctic another look.

In such a reassessment, both countries’ cold-weather capabilities will loom large. Already, Finland’s winter warfare skills are the stuff of legend, dating to the country’s heroic resistance against the Soviet Union in the Soviet-Finnish war of 1939-1940. Its know-how and insights into the Russian Armed Forces are second to none, too. Northern Finland would be the perfect location for NATO to establish a Winter Warfare Center of Excellence.

Such an initiative would also reward Finland for having maintained a strong national defense since the end of the Cold War. Sharing a massive 1,340-kilometer (800-mile) border with Russia, Finland has consistently spent 2% of its gross domestic product on defense. In the process, it has procured top-flight US defense products, such as JASSM missiles, Stingers, and GLRMS systems, in a partnership that dates back decades. Most recently, Helsinki purchased sixty-four F-35 fighter aircraft to replace its fleet of F-18 Hornets. It is no exaggeration to say Finland boasts of some of the best troops and equipment in Europe.

Although Sweden has not maintained the 2% threshold for defense spending, it recently announced major defense spending increases. As the largest of the Scandinavian countries, it brings considerable capabilities to NATO, including the German Leopard battle tank, the US Patriot air defense system, and its world-class Archer 155 mm self-propelled howitzer. Now, Stockholm is set to recommit itself to military defense in the context of NATO.

Of course, Sweden and Finland will be called upon to do more than deter Russia; they will also play a role in the alliance’s response to China, which merited significant attention at the Madrid Summit. As it happens, both countries are at the forefront of emerging technologies, too, most notably in telecommunications, in which Sweden’s Ericsson and Finland’s Nokia are market leaders. Indeed, both Stockholm and Helsinki are aware that they have signed up for a proactive alliance and not simply an anti-Russia mission.

Putin has made incremental gains in Ukraine, but he has not achieved a strategic victory. Just the opposite. Since it was formed in 1949, the alliance has grown from twelve to thirty members. This round of enlargement will be the most consequential since its enlargement in Eastern Europe two decades ago. Among the countries who joined then: the Baltic States. With Sweden and Finland in NATO, they and the alliance will be more secure than ever. Six months into the war in Ukraine, that’s a strategic win for the West.