China’s "New Era" and Our Response 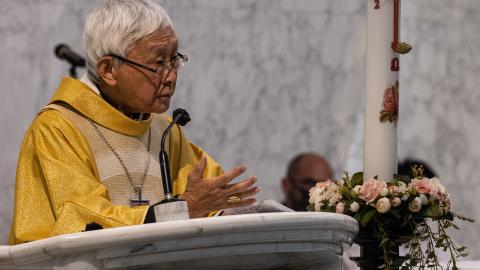 If Vladimir Putin’s threat to use nuclear weapons in Russia’s war against Ukraine is not worrisome enough, Communist Party-controlled China is entering what President Xi Jinping calls its “new era” — one that promises to pose a direct threat to the values and freedoms of the United States and the world, including the Holy See.

At last week’s 20th Chinese Communist Party Congress, Xi cemented his power with an unprecedented third term as CCP head and purged the party of its more moderate leaders. He announced firm resolve for a “centralized, unified party leadership” of all sectors within China and CCP governance as a competitive global model. Xi intends to replace the US-led world order, established after World War II on the principles of state sovereignty, freedom and non-aggression. Experts report that Xi is preparing China for a confrontation with the West, which he believes is increasingly likely.

In his two-hour opening speech at the congress, Xi vowed to double down on “socialism with Chinese characteristics,” a term and political system he tirelessly advances culturally, as well as politically and economically, for all domains within China. It is an ideology that combines communism and Chinese nationalism.

“Marxism is the fundamental guiding ideology upon which our party and our country are founded and thrive,” Xi stated at the congress, and, giving ample credit to Marxism having been adapted to the needs of modern China, he added, “Marxism works.” In fact, it is a system that ruthlessly denies individual freedoms of expression and religion, as well as a long list of other basic human rights.

The US State Department first recognized the new era threat under Secretary of State Mike Pompeo. It was underscored by China’s lack of transparency and heavy-handedness in its pandemic response.

China is now identified as the United States’ only real geopolitical rival in the Biden administration’s US National Security Strategy report, released on Oct. 12. The report makes the chilling finding that China is “the only competitor with both the intent to reshape the international order and, increasingly, the economic, diplomatic, military, and technological power to advance that objective.”

However, this report detailing American resolve to strengthen national security does not reflect the determination needed to counter Xi’s ideological war. It makes no mention of competing with it specifically on the basis of freedoms of speech and expression, and religion and conscience. These are the core rights undergirding our liberal democratic order, which starkly distinguish our system from the CCP’s coercive dictatorship.

How strong is the US policy commitment to defending these rights either at home or internationally? Will such rights be eclipsed by interests for climate change, investment and trade, and a withering domestic cancel culture?

The Vatican also represents a moral voice on the world stage but in the interest of furthering diplomacy, it has been unwilling to use it against the CCP. It remains silent in the face of credible evidence of the CCP’s genocide against Uyghur Muslims, the crushing of Hong Kong’s civic society, the practice of forced abortions, sterilizations and organ harvesting, and a great many other horrific injustices. It self-censors on the ongoing persecution of eight Chinese bishops who have a papal mandate. These include Hong Kong’s 90-year-old Cardinal Joseph Zen, whose transparently political trial is slated to resume this week; Hebei’s Bishop Julius Jia, a resister against the CCP directive to prevent children from learning about Christianity; Henan’s Bishop Joseph Zhang, who ran a Catholic seminary without CCP approval; and Zhejiang’s Bishop Peter Shao, who resists CCP indoctrination (the last three are held in secret detention).

The Vatican even tolerates the CCP’s misrepresentation of the agreement’s still secret content, by tricking the Catholic underground into thinking that the Pope wants them to join the party’s united front-controlled “Patriotic” associations and pledge “independence” from papal teaching.

On Saturday, the day of the CCP Congress’ closing session from which Xi emerged newly empowered, the Vatican announced the second renewal of its agreement with Beijing on the appointment of Catholic bishops. It no longer heralds it as “historic” as when it was first signed in 2018 for it is abysmally disappointing.

A third of China’s dioceses still lack bishops, while, in four years, only six bishops have received new appointments. Despite this, Pope Francis proceeded with the renewal because he views it as the diplomatic “art of the possible” as he explained to Reuters last July.

Xi, on the other hand, no doubt sees the agreement as a tool for the party “to provide active guidance to religions so that they can adapt themselves to socialist society,” a goal he stated in his speech at the congress. This can advance the CCP’s repressive “Sinicization” policy against China’s religious communities that began in earnest in 2018, with removing church crosses, replacing church images of Jesus with Xi’s portrait, and requiring all sermons to focus on Xi’s thought. Children are now banned from churches and bible texts are reinterpreted to suit CCP propaganda.

Mindong’s Bishop Vincent Zhan Silu, whose ex­communication Pope Francis lifted for the agreement, demonstrated the required party fervor of the new era when he led dozens of diocesan priests to a “formation course” at the Central Institute of Socialism with the CCP’s local United Front, declaring, “To carry out the Sinicization of religion with determination, we will continue to follow a path that conforms to socialist society.”

Last June, another, Sichuan’s Bishop Paul Lei, used the Solemnity of Sts. Peter and Paul in his cathedral to celebrate the CCP’s birthday, urging the Catholic community to “listen to the word of the party, feel the grace of the Party, and follow the party.”

Prominent Chinese figures can no longer speak out freely, as Cardinal Zen did in Hong Kong two years ago. High-tech government surveillance keeps close tabs on civil society. Dissent and expression countering CCP propaganda is strictly forbidden. The entire world glimpsed this early in the pandemic when Dr. Li Wenliang first revealed the existence of the COVID-19 virus and was quickly censored, punished and forced to issue an apology, though he continued to give interviews from his hospital bed, before himself dying of the disease.

Millions of others who express dissent or practice religion outside CCP controls are punished in obscurity, without a free media or internet and a transparent detention system. They include domestic human rights reporters, defense lawyers, journalists, bloggers, religious and ethnic minorities, and ordinary critics of party policy.

More than 1,000 pro-democracy protesters are reported to be currently jailed in Hong Kong, including independent media mogul Jimmy Lai. Some prominent dissidents are preemptively suppressed, as were religious freedom defense lawyer Xie Yang and free speech advocate Yang Maodong, who were detained on “inciting subversion” charges prior to last winter’s Olympics.

Meanwhile, Chinese dissenters based outside China are being kidnapped or coerced to return to China by the CCP for punishment or silencing. According to a September report by the Spanish NGO, Safeguard Defenders, Beijing has “persuaded” a staggering 230,000 Chinese nationals, between April 2021 and July 2022 — not all of whom are criminal fugitives and many are undoubtedly regime critics — to return under government police operations Fox Hunt and Sky Net. Beijing also issues international arrest alerts through the international police agency Interpol to extradite Uyghurs fleeing genocide.

CCP suppression of Chinese dissidents even occurs in the West. In mid-October, a Hong Kong protester in Manchester, England, was videotaped being tackled and beaten by Chinese consular staff. On Oct. 20, the US Department of Justice charged six individuals with conspiring to act as CCP agents in a “multi-year campaign of harassment intended to coerce a US resident to return to China.” (This is not the only such case.)

Last December, Purdue University president Mitch Daniels warned of an “atmosphere of intimidation” aimed at Purdue’s Chinese students critical of Beijing and banned attempts to deny students’ rights or to “collude with foreign governments in repressing them.” Campus centers infiltrated or established by the CCP, sometimes called “Confucius institutes,” also are known for intimidating Chinese students in the United States.

Xi’s vision of a new era for the CCP involves a war of ideology. Like a chapter from Orwell or Huxley, Beijing goes to great lengths to hide the dark side of its dystopian political system. The United States and the Vatican must lead in exposing CCP atrocities, speak for the Chinese who cannot, and resolutely defend free speech and religious freedom as principles critical for human rights and dignity. This is a competition that must be won for the sake of humanity.

Read in the National Catholic Register.