Researchers recently reported that Americans ages 45-55, with a high-school-education or less, have a significantly greater risk of dying in the period 1999-2013 from the consequences of substance abuse, when compared to earlier cohorts. Why? There is considerable speculation, but the role of adolescent drug use has been overlooked and it may be at the root of these premature deaths.

With the specific substance use contribution to the mortality findings, we should look not just to this cohort’s current exposure to drugs and alcohol, but to the history of substance abuse of the respective cohorts compared. Specifically, we should examine their respective adolescence/young adulthood exposures, a time when patterns of substance use are known epidemiologically to establish future consequences, the history of which either mitigates or intensifies the consequences later in life.

We can examine the periods of time through which each cohort passed as teens and young adults and examine the relatively increased or lessened “exposure” to substance abuse that confer subsequent susceptibility to greater harm.

The research in the Proceedings of the National Academy of Sciences found that an increase in mortality for whites was largely accounted for by increasing death rates from drug and alcohol poisonings, suicide, and chronic liver diseases and cirrhosis, and lower education status contributed: “Although all education groups saw increases in mortality from suicide and poisonings, and an overall increase in external cause mortality, those with less education saw the most marked increases.”

Specifically, “for those with a high school degree or less, deaths caused by drug and alcohol poisoning rose fourfold; suicides rose by 81 percent; and deaths caused by liver disease and cirrhosis rose by 50 percent.”

The researchers focus on a trajectory shift in 1999, and suggest the increased availability of opioids in the late ’90s as a potential contributor (both heroin and prescription opiates). But their exposure in later adulthood does not fully explain the several differentials encountered.

Yet by turning to an earlier period, that of adolescence/young adulthood, a provocative differential in exposure is indeed what we find.

But circumstances surrounding birth years are not as meaningful as a later period, the time of passing through adolescence/young adulthood (here arbitrarily set at a ten-year window when they respectively reached ages 15-25 years old).

Why is that “exposure” important? Because epidemiologically, these are the ages of greatest susceptibility to initiation of what can prove to be life-long patterns of substance abuse. Those who do not initiate substance abuse until after age 25 are highly unlikely to experience subsequent difficulties, including dependency and its consequences later in life, even if there were later to initiate substance abuse. Moreover, those with lower socio-economic standing seem to suffer the consequences of drug dependency more so than better-off peers.

Warrant for examining this early period can be seen in data from the National Household Survey on Drug Use and Health, where we see a recent sharp rise in drug use among the adult population between the ages of 50 and 64: 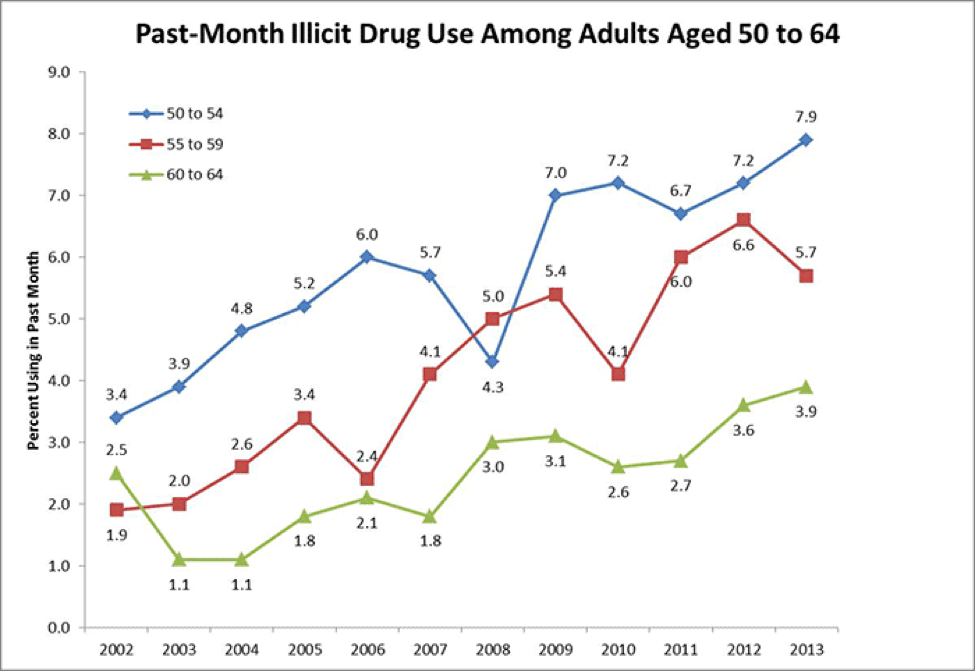 The best interpretation of this rise suggests that, rather than an older cohort suddenly initiating drugs, a cohort with earlier, adolescent patterns of high drug use is now passing through this age-set, bringing with them their drug propensities.

The reasoning is based on our knowledge of brain maturation and related vulnerability to the consequences of initiation; the younger the age of exposure, the more long-lasting and consequential the effects. And the effects can be found not just for the particular substances to which one is initially exposed (most commonly for adolescents, alcohol and cannabis), because dependency and susceptibility cross-over, once acquired, to yet other substances of abuse as they are encountered.

Hence, there may be a “priming effect” for an exposed group presented with powerful opiates in later years. Simply put, the worst vulnerability is for those initiating at an age early in brain maturation, who are most likely to succumb to the (behaviorally-driven) brain disease of addiction, with its attendant manifold of physical difficulties that mount from adolescence through adult life.

The potential is significantly worsened by the frequency of early use, and the potency of the substance, such that daily use, for instance, of very high potency cannabis is now known to be particularly devastating for the young, and leads to susceptibility for use and dependency problems on yet other substances, such as cocaine or the opiates (either heroin or prescription opiate misuse or both).

We turn to the high-school survey of substance use known as Monitoring the Future, run out of the University of Michigan (MTF) under a grant from the National Institute on Drug Abuse. The virtue of this survey, which is school-based, is that it has continuous records tracking high-school seniors since 1975.

Both periods were a time of relatively low rates of substance use as measured by the pertinent category in the MTF (termed Lifetime Use of Any Illicit Substance). Again, the youngest 15 year olds will have correspondingly lower rates of use than will their older cohort peers, and will age into increased societal rates of use.

In contrast, the relatively high-mortality corresponding cohort (encountered in 2013) reached ages 15-25 during the years 1974-1984 for older members, and 1983-1993 for the younger. As high school seniors, they would have passed through the MTF measurement period during a societal surge of increasing substance use rates, posting a prevalence that even today remains the highest found.

Accordingly, there should likely be a “leading edge” and a “trailing edge” of change as the nine-year cohort passes through for both exposure, and for subsequent mortality.

The drug use data show that lifetime use of any illicit quickly spiraled up from rates of 55 percent in 1975 to 67 percent of high-school seniors by 1981-1982, where the rates held, not to drop back to 1975 levels until 1989, and proceeded sharply downward thereafter until 1992, when they hit 41 percent.

This period through which the high-mortality cohort passed saw the highest use of not only cannabis, but shortly thereafter, witnessed as well the crack-cocaine epidemic (cocaine being a drug typically initiated somewhat later than high-school).

Subsequently, for future consideration, after falling to the 1992 low of 41 percent, prevalence rose again, doubling by 1997, there to effectively plateau at levels that were nevertheless below the peaks reached in the earlier decade. Post-2001, the rates declined until approximately 2008 (combined high-school grades in the MTF reveal that cannabis use declined by 25 percent during that period).

Today, those low rates have ended, and post-2009, the MTF shows once again a steep climb, especially of cannabis, a development that led MTF researchers to posit the beginning of “the second relapse phase of America’s youth epidemic of drug use.”

The implication of these respective advances and recessionals in relation to the rates of high-mortality today is that this hypothesis concerning adolescent/young adult “exposure” will lend itself to an epidemiological test in the near future, were future data to show concordances with the shape of MTF data. Perhaps rates of mortality will soon plateau, and then resume?

The argument, then, is that the higher mortality for the cohort seen between 1999-2013 was conditioned by the higher rates of substance abuse through which they passed as adolescents/young adults. This cannot be a definitive analysis, but it does seem important to ask more generally: does teen drug use shorten lives, particularly for the working class and the disadvantaged, the effect continued into later life?

Authoritarian regimes spend significant sums trying to influence politics within the US and other democracies. Anna Massoglia of Open Secrets joins ho...

US Athletes Should Boycott Beijing Olympics

In an interview with Laura Ingraham on Fox News, Mike Pompeo calls for American athletes to boycott the Beijing Olympics. ...

In an interview with Drew Mariani on Relevant Radio, Melanie Kirkpatrick discusses the origin of Thanksgiving. ...