Discussing the “sentencing reform” bill now before the Senate—the effect of which would be to provide early release for thousands of federal felons—George Will argues that it will not be enough. That’s because the issue is “complex.”

He is right about that, but about little else when one examines the facts he marshals in support of his stance. In particular, there is little relationship between the issues that Will addresses and the detrimental impact of the pending legislation.

The larger problem, as Will sees it, is the unfettered “rage to regulate” by the modern nanny state, which rage is “creating new crimes.” While this development should be guarded against by all means, what has it to do with the release of convicted federal felons? Is Will suggesting that their crimes are not real crimes?

If so, he should speak to the victims of the more than 2,300 prisoners eligible for release who are listed under the “Armed Career Criminals Act,” reserved for those who have been convicted more than twice of violent or serious felonies.

Quoting a criminologist, Will accepts that “the deterrent impact of a punishment depends only weakly on its severity, but strongly on its swiftness and certainty.” This postulate may be true, but only to a degree. Surely there is a difference between a fine and a 20-year sentence in its ability to deter the commission of a crime.

That said, deterrence is not the only value of incarceration. There is also the matter of reducing the sheer number of crimes committed by habitual offenders. A study of state prison inmates, for instance, showed not only that the mean number of arrests prior to ultimate conviction for each felon was eleven, fully 77 percent of them re-offended within five years of release.

That’s a lot of victimizations per inmate, crimes which don’t occur and victims who are spared when a criminal career is interrupted.

Will also argues that we are not doing a good job of “supervising people released from incarceration.” Again, no doubt true, but there is nothing in the current sentencing reform legislation to achieve that objective; in fact, justice authorities worry about just the opposite—that a sudden release of large numbers of felons will overwhelm existing resources.

Will further notes that much of incarceration is social work, leading to “prophylactic measures to prevent drug-related recidivism by people imprisoned for drug offenses.” While the goal is worthy, again, the measure has no relevance to the population who would be released. Of drug offenders in federal prison slated for release, 99.5 percent have been convicted of serious drug trafficking, not drug use. What is the social work prophylactic for El Chapo?

Will also implies the nature of the crimes committed by these felons is not a threat to society, since “only 7 percent are convicted of violent crimes.” Many disagree, including FBI Director James Comey, and the National Association of Assistant United States Attorneys.

They argue that major drug crime indeed constitutes violent victimization, of a type that particularly devastates poor and minority communities. And surely the majority of released and still-dangerous felons will return there, not to upscale suburban enclaves. With all our discussion about the the injustices of disparate impact of arrest rates, why should we seek to increase the vulnerability to crime of already devastated minority neighborhoods?

In a final twist on “complexity,” George Will invokes the provocative thesis that lead in the atmosphere may be the real culprit underlying criminal activity, and as it has fallen between 1975 and 1991, we should see ameliorative effects. Sure enough, heavy lead exposure in youth is linked to both IQ loss and violent proclivity. The thesis is plausible (though one notes that the high point for SAT scores in high schools occurred in 1965, with a lot of downhill since then). Nevertheless, there is this evidence: 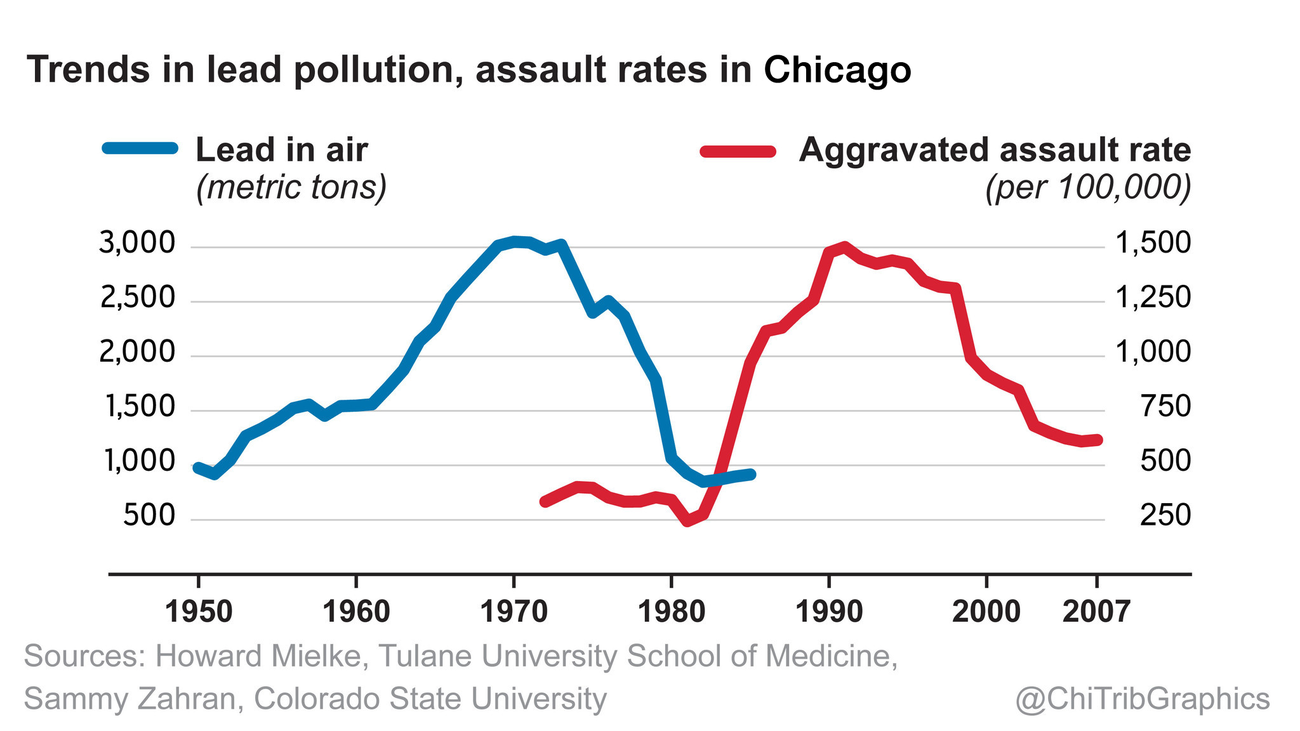 But more to the point, what has that this demonstration to do with releasing convicted felons today? We must remember, if we’re after exculpating root causes, there are multiple contenders, from efforts to link crime rates to abortion policy, to decaying family structure, or to educational collapse.

Or even more plausibly, one could look to the rise in drug use. In fact, a line could be graphed on the above chart showing rates of drug use and crime that would exactly match with that of lead exposure.

Further, drugs are deeply implicated in criminal behavior. More than half of those arrested for any crime had drugs in their system at the time of arrest. The Department of Justice has noted the reality that “drug users are more likely than nonusers to commit crimes, that arrestees and inmates were often under the influence of a drug at the time they committed their offense, and that drug trafficking generates violence.” For homicide offenders in federal prison, 45 percent used drugs in the month prior to their offense, 17 percent at the time of the offense.

Unless George Will’s latent libertarianism has advanced beyond recall, he might also acknowledge that the links between drug use and criminality are certainly as plausible as the thesis regarding lead. Moreover, lead is linked to a decline in IQ of 7.4 points through early exposure. The current estimate of IQ loss through heavy adolescent marijuana use is 8 points.

Making a Killing | Ep. 7: Risks and Opportunities for the Fight Against Kleptocracy