On Saturday, at about 2:30 AM local time, the destroyer USS Fitzgerald (DDG 62) and the Philippine container ship ACX Crystal collided southwest of Yokosuka, Japan — the home of the United States Navy’s Seventh Fleet. Several crew members were injured (including the commanding officer), and when flooded spaces were accessed pier-side, the bodies of seven sailors were found.

It is difficult to understand how something like this could happen, given the size of the vessels, the well-understood rules that govern the movement of ships, the expanse of the ocean, the technology available to avoid collisions, and the (relatively) slow speed at which ships move. As this tragedy unfolded in near-real time, on Friday night (Eastern time), I participated in a robust exchange on Twitter, trying to offer what little I could to concerned people trying to make sense of the news. Concern for the crew dominated the discussion, but there were many well-intentioned “how does something like this happen?” tweets. It would be premature and irresponsible to comment on the specifics of this collision, because I know nothing of them. What we have are photographs of two ships which give us some idea of the alignment of the vessels at impact, but which tell us little about their relative positions when the error chain began. There will be investigations and they will affix responsibility — such is the way of admiralty law and the practice of the U.S. Navy. Blame and responsibility have no place in this essay.

From 2004 to 2006 I commanded USS Bulkeley (DDG 84), a ship very much like the Fitzgerald, and during the rest of my 21-year Navy career I spent a good bit of time at sea. I have never been involved in a collision, but I have been in very tight situations which, had my ship or the other not properly responded, could have resulted in one. During my career, on the rare occasions in which Navy ships were involved in collisions, voluminous lessons learned were promulgated. We studied these incidents and incorporated them into our training. In virtually every instance, decisions made by fallible human beings were contributing factors. I hope to add to a common understanding of these factors.

The Rules of the Road

The movement of maritime traffic is governed by the Convention on the International Regulations for Preventing Collisions at Sea (COLREGS, 1972). This is essentially a compendium of international law that, among other things, lays out for mariners what is commonly referred to as “the rules of the road.” It describes in exhaustive detail how ships are required to maneuver to avoid collision. In simple terms, when ships are in a meeting, a crossing, or an overtaking situation, one of the vessels is the “stand-on” vessel — which privileges them to remain at present course and speed – and one is the “give-way” vessel — which obligates them to alter course to avoid collision. To put this in more familiar terms, it is a little bit like coming to a four way stop in your car and “yielding to the right.” The car on the right is the “stand-on” car, and the car to the left is the “give-way.”

These are the typical ways power-driven vessels encounter each other. From left to right: Meeting (or head-on), crossing, and overtaking. (Adapted from Aztec Sailing).

Things become more complicated at sea. Although there are road-like areas (with traffic separation schemes and channels) in which ships move largely like cars on a highway, the vast majority of the ocean is not anything like that. Ships encounter each other from all directions of the compass, and the meeting, crossing, and overtaking situations can become confused. This confusion leads to poor assessments of just which vessel is the “give-way” and which is the “stand-on.” Make no mistake — there is an absolute definition of these terms that can be applied to every situation based on the relative direction each ship is traveling. The problem is that humans on each ship are making this determination and, as we all know, to err is human. A common error is to mistake an overtaking situation and a crossing situation, as we see in the “overtaking” situation graphic above this paragraph. A ship being overtaken is the stand-on vessel and so maintains its course and speed. If the other ship involved is to its right side generally, the second ship may believe the situation to be a crossing situation — and since it is to the right, it would be the “stand on” vessel. Two ships believing they are equally the stand-on vessel is a recipe for disaster.


Situations like this are compounded at night. In the daytime, assessments are made based on the visual presentation the other ship offers. You see the other ship, you assess where you are relative to it (abeam, on the bow, abaft of the beam, etc.) and you act accordingly — based on what COLREGS tells you. At night, a system of lights of varying colors and arcs of visibility create a “virtual” picture of what one would see in the daytime (see the figure below to understand how this virtual picture emerges). One stands on the bridge at night and sees lights on the horizon. As those lights come into view, their color and arrangement creates a visual picture in the mind of the watch-stander that corresponds to a visual image he or she would have created from day-time watch-standing. This image is then plugged into the COLREGS prescriptions and proper determinations of the stand-on and give-way vessel are made. 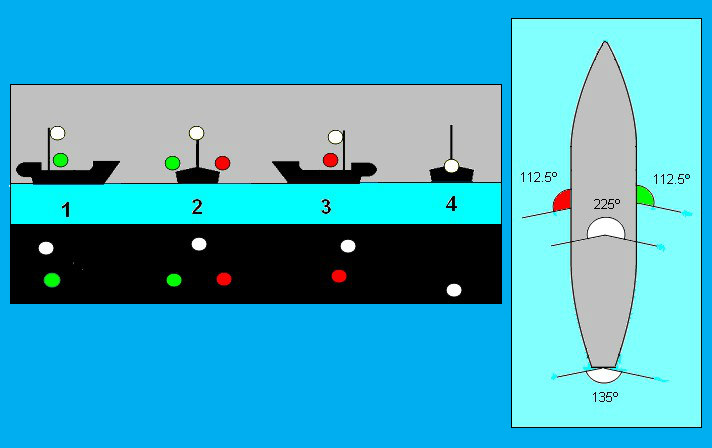 This represents the system of lights of varying colors that allow watch-standers to understand from where and how a ship is approaching.

But what if one of the ship’s navigation lights is obscured either physically or visually by other lighting (lighting not in accordance with COLREGS)? Such situations are not unusual. Cruise ships can sometimes be particularly difficult to assess based solely on topside lighting configuration. Fog is another special problem for visually assessing responsibility to maneuver, and fog at night is worst of all.

We don’t have to rely solely on the human eye and brain to make determinations of give-way and stand-on vessel at sea. Virtually all ships plying international waters (and certainly both ships involved in this incident) are equipped with electronic means for tracking other ships and alerting watch-standers (people working on the ship’s bridges) to the danger of collision.

When I was in command, I had a monitor installed next to my bed that replicated one of the main command-and-control pictures available to my watch-standers. This monitor was a “God’s-eye view” straight down on my ship out to 8 nautical miles. My ship was in the center, and other ships in the area were represented by ship avatars which indicated both their direction of movement and their speed. When the bridge watch called and woke me up to report a nearby ship that would pass close enough to be of interest, I swiveled this monitor away from the wall and matched what they were telling me with what the “radar” picture was telling me. Virtually all the time, the stories matched. Now and then, I saw something in the radar picture that was not reflected in the narrative from the bridge and asked for clarification. On occasion, I was concerned with a conflict and shuffled up to the bridge to have a look for myself.

Sometimes, the weather and waves conspire to create cluttered radar pictures. Such clutter is especially prevalent close to the ship, and this clutter can sometimes mask ships especially small ones, or contribute to not being able to hold a steady track on a contact, thereby creating a confusing evaluation of its course and speed.

On occasion — again, because of the presence of humans in the decision loop — plainly obvious situations are misinterpreted because of confirmation bias: Anomalous information might not match the mental picture that a bridge watch-stander has developed, and is then ignored. A classic case of this happening was the October 1996 collision involving the USS Theodore Roosevelt (CVN 72) and the USS Leyte Gulf (CG 55). Essentially, the Roosevelt “backed down” into the Leyte Gulf while, unbeknownst to the Leyte’s watch-standers, conducting engineering drills. The radar picture told a story of a massive aircraft carrier moving astern at a high rate of speed, but the mental picture of the bridge personnel on the Leyte — who did not know that such a maneuver was going to happen — disregarded what their system was telling them, and they failed to turn in sufficient time to avoid collision.

Big ships do not turn or stop on a dime. A 29,000-ton merchant vessel traveling at 15 knots takes a long time to stop or slow, and its turning radius is quite large. Using formulas from the ABS source cited here, the International Maritime Organization (IMO) standard for the container ship involved in this collision appears to be approximately 2.5 nautical miles to stop (at 15 knots) and over a half mile turning radius. The 9000-ton destroyer in question is quite nimble comparatively, but our automobile-infused understanding of last second swerves or the power of anti-lock brakes simply fails in this context. Decisions to avoid collision must occur far earlier and at far greater distances than in an automobile, and the longer that decision is delayed, the fewer options for avoidance will exist. In a car accident, the point at which maneuvers by either car will be insufficient to avoid the collision happen in milliseconds before impact, but that point is reached in the tens of seconds or more before impact between ships. Without early action, all either ship can do is to try and minimize the angle of impact.

The Human Factor and the Unforgiving Seas

Because ships at sea are required to have embarked humans in the decision loop (something that may indeed become a relic of the past as automation and artificial intelligence improves), human factors will continue to dominate as the cause of collisions. Were the watch-standers on each ship well-qualified? Were they distracted? Were they properly rested? Did they understand the rules of the road? Was the proper maintenance performed on installed electronic navigation systems? Were those systems ignored or devalued?

These questions and more will be posed by the various organizations — Navy and civilian — who will investigate this collision. It is nearly inconceivable that human factors will be eliminated as a contributing cause of this incident. It is quite likely that they will be cited as the primary causes.

But the human factor cuts both ways. I am certain that the crew of the Fitzgerald harnessed many very human factors to save their ship. Given what is already being reported about the spaces that flooded and their size, a heroic effort was required to keep that ship from sinking. Americans young and not so young fought through the night and into the next day to bring that ship safely back to port—all the while knowing that several shipmates were injured, possibly dead, and that their captain had been badly hurt.

There will be time later to affix blame for this tragedy. For a few days, I will spend my time thinking about families who have lost, and a crew that is hurting. I hope you will too.

War on the Rocks

Testimony before the U.S. House of Representatives, Committee on Armed Services, Subcommittee on Strategic Forces, February 23, 2021 ...

Trading and Planning to Compete

In a podcast interview on Defense and Aerospace Report, Bryan Clark discusses the Pentagon’s need to rethink its war planning scenarios and adopt more...