Energetics are the high-energy chemicals needed for warheads, missile propulsion, and pyrotechnics; and the US Defense Department needs new investment to ensure the primacy of the "arsenal of democracy." 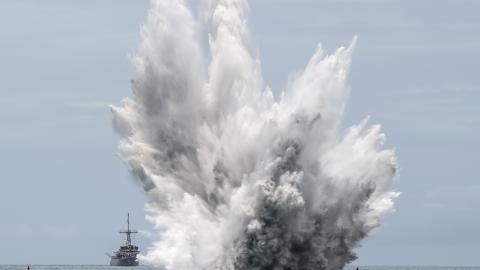 Caption
The Avenger-class mine countermeasures ship USS Pioneer observes a controlled mine detonation while conducting a joint exercise with the Royal Thai Navy in the Gulf of Thailand on June 7, 2019. (US Navy Photo by Corbin Shea)

As the war in Ukraine continues to take its tragic toll, US defense strategists are questioning the nation’s ability to fight a protracted conflict. The problem is that US stockpiles of critical munitions are being depleted as Washington supplies Ukraine with Javelin antitank and Stinger antiaircraft missiles. For months now, US policy makers and experts have sounded warnings. Over the past year, Senator Tom Cotton (R-Ark) warned that the national stockpile of munitions is dangerously low. NATO officials are also worried, and Secretary of Defense Lloyd Austin urged allied countries to “dig deep and provide additional capability” to Ukraine.

But the problem is even more complicated. Not only is the United States lagging in the production of the missile bodies and artillery shells, but it faces a shortage of the chemicals that these and other systems depend on for their lethality. This mix of chemicals is called energetics, and they come in three main forms: explosives, which create the lethal effects in warheads; propellants, which produce thrust for missiles and rockets; and pyrotechnics, such as fireworks, which illuminate or mark targets for military and civilian applications.

Not only are energetics relevant to the current munitions pipeline problem, they are also critical to advancing the operational concepts that the US military is developing to deter and counter threats around the world. Advancements in energetics translate directly into advantages on the battlefield because they allow for increased range, increased lethality, and decreased weapon size. All these capabilities are important to counter the antiaccess/area-denial (A2/AD) challenges, which refers to the PLA’s ability to hold US and allied forces at risk in the South and East China Seas and elsewhere.

Increased range, for instance, allows a rocket or missile to target an adversary from a safer distance, helping to reduce the danger to friendly forces. Moreover, for advanced systems, including hypersonic weapons, advanced energetics can allow hypersonic glide vehicles to achieve greater range while sustaining higher speeds.

Energetics are also central to lethality, which is the ability to destroy enemy systems and personnel. More explosive power per weapon increases the likelihood that a target will be disabled or destroyed on the first shot.

And advanced energetics allows for smaller munitions. For example, DoD can build a 400-pound bomb with the same lethality as a 1,000-pound bomb. Smaller and lighter weapons mean US platforms could bring a greater number into the fight and spend less time restocking. Recent discussions around contested logistics in high-intensity conflict point to the importance of making everything smaller, lighter, faster, and more portable.

Moreover, energetics are essential to other areas as well—particularly in the commercial and military space domain. More efficient energetic fuels mean more mass can be put into orbit or transferred to the moon or Mars. Just as energy-dense propellants increase weapons range and speed, increased density can provide spacecraft longer range, better maneuverability (important for repairs in space), and increased engagement speeds.

For more than a decade, the US energetics supply chain has been brittle. Although the United States developed key compounds—such as CL-20, one of the world’s most powerful non-nuclear explosives—in the late 1980s, the United States never produced it at scale. In contrast, China began producing CL-20 at scale a decade ago, and Russia added the compound to its arsenal. Recent assessments of the industrial base have found that DoD imports roughly a third of its energetic materials from foreign sources, with a significant portion coming from China. Domestic production relies on a handful of aging production facilities and suffers from a lack of surge capacity.

The most widely used energetic materials come from a small number of government owned and operated facilities that produce, mix, load, and pack them into weapon systems. Much of this takes place at Naval Surface Warfare Center Indian Head Division (NSWC IHD), the Navy’s only arsenal and the nation’s only remaining full-spectrum, all-domain energetics center. This facility dates back to World War I.

Extensive government regulation for facilities that produce and handle explosive compounds also means that new ones have not been built. Even if companies are interested in producing energetics, they face high barriers to entry.

The good news is that attention to the issue has increased in the past year. Most recently, with White House support, the Defense Department has used the Defense Production Act to work with one company that develops an important chemical (aminoguanidine bicarbonate [AGB]) and to initiate more collaboration between DoD and other suppliers of critical chemicals. In addition, the 2023 NDAA authorizes an additional $3 billion for munitions. The NDAA will also allow for longer term contracts, encouraging manufacturers to invest some of their own capital into this sector.

While DoD is rightly focused on Ukraine’s immediate needs and on replenishing US stocks, it should also look to the future and not merely invest in legacy munitions production. Undersecretary of Defense for Acquisition and Sustainment, Bill LaPlante, recently observed that the Ukraine conflict is an opportunity to modernize US defense industrial base supply chains. He is right: DoD now has a big opportunity to tackle the underlying problems in the energetics enterprise by advancing the development of new compounds produced at home, with twenty-first-century manufacturing methods. The Chinese government does so in this sector (as well as many others).

Given the relatively “bounded” arena of energetics, DoD has a chance to align strategically many of the programs designed to promote public-private partnerships over the past decade.

At each stage of the energetics capital stack, DoD can target its non-dilutive investment capital, loans, loan guarantees, prototyping contracts, and production contracts to ensure that the energetics sector has the right incentives to develop in the United States. Companies in this sector must be willing to take the necessary R&D risks, and they will only do that if they are confident of an enduring marketplace. This would include tapping into programs across the DoD enterprise, such as: DARPA’s Embedded Entrepreneurship Initiative; the Defense Innovation Unit’s National Security Innovation Capital; AFWERX; the Small Business Innovation Research; the Rapid Defense Experimentation Reserve Fund; and the newly established Office of Strategic Capital.

Wars are rarely short, and the Department of Defense is currently providing necessary lethal aid to Ukraine and preparing for the possibility of war with China in the western Pacific. It should be inconceivable for the “arsenal of democracy” to run short of the very chemicals responsible for military weapons’ propulsion and lethality. By focusing investment on building new, more lethal energetic compounds, and replacing 20th-century facilities with twenty-first-century plants, DoD can position itself to deter, and if needed, fight the nation’s next war.