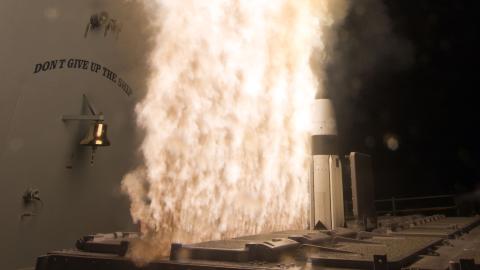 Caption
A Standard Missile-3 Block 1A interceptor is launched from the guided-missile cruiser USS Lake Erie during a Missile Defense Agency and US Navy test in the Pacific Ocean on February 13, 2013. (US Navy photo)

On October 27, 2022, the Biden administration released the public version of the Missile Defense Review (MDR). The document is commendable in some respects and is concerning in others. Below are some myths and realities about the Biden MDR.

Myth 1: The Biden administration’s MDR aligns with the priorities of the Biden National Security Strategy (NSS).

Reality: Curiously, the NSS calls deterrence of strategic attacks against the homeland “a top priority.” But what would be a greater priority than that? The MDR rightly states that defending the homeland and deterring attacks against the United States is “the top priority.” Policymakers should press the administration about this incongruence and ask why the NSS downgraded the defense of the US homeland from the worst kinds of danger.

Myth 2: The MDR lacks an appreciation of the dangers that nations with advanced missiles pose to America.

Reality: The review does a fine job explaining how the missile threats to the US and its allies are evolving. It recognizes that adversaries are investing in technologies to make their missiles maneuverable to better evade and confuse US detection and defenses. The MDR also notes that these adversaries are working to obscure the United States’ ability to discern whether those missiles are carrying a nuclear or non-nuclear payload.

Myth 3: The MDR elides the growing and pressing threat of China.

Reality: The MDR highlights how the People’s Republic of China’s missile program is growing in capability and number, pointing out that Beijing is progressing toward “closing the gap” with the United States’ missile capability. Perhaps most helpfully, the MDR connects the nature of the Chinese missile program with the hostile intent of the PRC. China seeks to replace the United States as the global preeminent power, and the MDR affirms the administration’s guiding principle that the PRC is the pacing threat.

Reality: The MDR notes Russia’s hostile intent and willingness to pursue its aims through naked aggression. In addition to listing the ways Russia is improving its missile program, the Biden MDR explains, as the Trump MDR helpfully communicated, that “Russia has retained and upgraded its own missile defense system designed to protect Moscow against a US strike.”

Reality: The MDR captures the nature of the North Korean missile threat well, cataloging its growing capability and willingness to resume provocative missile testing. It also notes that Iran maintains a large missile arsenal and poses threats to deployed US forces. Although Tehran does not have a true ICBM that can reach the US homeland, the MDR highlights how the country “continues to pursue a space program, which could shorten the pathway to a future long-range missile capability.”

Myth 6: The MDR ranks as a lower priority the defense of US territories in the most at-risk regions of the world, notably, the US territory of Guam.

Reality: In a new and compelling articulation, the MDR is forward-leaning in its emphatic claim that the US military will forcefully and completely fight for and from the US island of Guam. It states:

Within the context of homeland defense, an attack on Guam or any other US territory by any adversary will be considered a direct attack on the United States, and will be met with an appropriate response. Additionally, Guam is home to key regional power projection platforms and logistical nodes, and is an essential operating base for US efforts to maintain a free and open Indo-Pacific region. The architecture for defense of the territory against missile attacks will therefore be commensurate with its unique status as both an unequivocal part of the United States as well as a vital regional location. Guam’s defense, which will include various active and passive missile defense capabilities, will contribute to the overall integrity of integrated deterrence and bolster US operational strategy in the Indo-Pacific region.1

Myth 7:The MDR outlines a useful timeline and plan for the architecture of Guam’s defense.

Reality: The security of Guam is necessary for the United States to project power in an increasingly volatile region due not just to North Korea’s threats but also to the PRC’s belligerence and threats to take Taiwan by force. But the MDR does not give a timeframe for when the United States will complete the defense of Guam or what that defense will entail with any degree of detail. Even if those plans are robust and exactly what the critical American island deserves and needs—which is a tall order—the US will likely not implement such plans without the focus and backing of the most senior political leadership.

Myth 8: The MDR is transparent about the weaknesses and potential shortcomings in the administration’s efforts to provide an adequate homeland defense.

Reality: While the Biden policy document commits to US homeland missile defense, it does not acknowledge that the replacement interceptors, the Next Generation Interceptors, will not be ready for deployment for several years. Meanwhile, the threat from North Korean missiles is present and growing. In the interim, the administration has no plan for improving the defense of the US mainland and the American people to stay ahead of the growing threat.

Myth 9: The homeland defense system is in a satisfactory condition due to the prior administration’s focus and competence.

Reality: President Donald Trump verbally committed to US homeland missile defense, and his MDR committed to improving it in some detail. But the former president left the system essentially static—he left silos empty when interceptors could have filled them, canceled promising next-generation technologies, and failed to initiate programs that could have provided the scientific and technological demonstrations to qualitatively improve the layered missile defense system. The Trump administration’s failure to improve US missile defense was bad enough, but the Biden administration is compounding the grave error at a time when the missile threats are growing worse from peer threats like China and Russia and rogue states like North Korea.

Reality: The MDR does not offer the necessary change in policy to develop a defense, not even for key US systems and facilities, against the kinds of missile threats China and Russia pose. Such threats could have enormously coercive effects against the United States. Rejecting a policy change that would have defended against certain kinds of peer missile threats to the US mainland, the Biden MDR affirms that the “United States will continue to rely on strategic deterrence—underwritten by safe, secure, and effective nuclear forces—to deter such threats as outlined in the 2022 Nuclear Posture Review (NPR).”

Myth 11: The MDR’s illustration of the danger of the cruise missile threat to the homeland translates into a policy or strategy change.

Reality: By pointing out the long-known problem of cruise missile threats to the American homeland and promising at most to look at the challenge, the MDR incentivizes adversaries to use coercive cruise missile strikes below the nuclear threshold. Biden’s approach compounds the increased ambiguity in the NPR over whether a non-nuclear cruise missile attack on US ballistic missile submarines in port constitutes a strategic attack.

While a full evaluation of the NPR is outside the scope of this paper, that document is like the Biden MDR. It says many of the right things about the nature of the evolving and complex threat environment, especially now that the US has two major nuclear adversaries to deter and defend against. But the MDR is unwilling to lead the way to enact some of the key policy and strategy changes that are necessary to meet today’s threats. In this vein, Americans have little reason to believe that the Biden administration will deliver what the Trump administration failed to do to improve the layered missile defense architecture. Now that the threats are even worse, the consequences are even greater. For a document that lists defending the homeland as its top priority, the Biden MDR leaves questions about his commitment to this priority.