The Morality of US Nuclear Deterrence 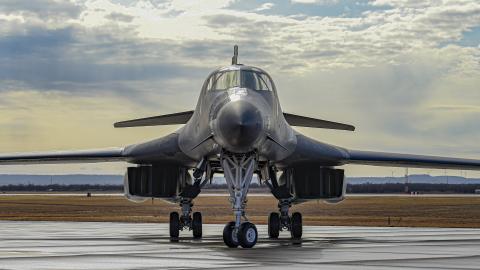 Caption
A B-1B Lancer taxis on the flightline at Dyess Air Force Base in Texas, on January 11, 2022. (US Air Force photo by Airman 1st Class Ryan Hayman)

The horror of nuclear war is on the minds of Americans as Russian president Vladimir Putin turns up the intensity of his threats. It forces questions that were more commonly asked during the Cold War. Like how does the United States think about the purpose of our nuclear weapons? Can Christians support any use of nuclear weapons?

First, note the obvious but often underappreciated point that countries use nuclear weapons differently. Nuclear weapons strategies, along with other military and foreign policy strategies, accord with each nation’s view of what is right and in their respective interests as they perceive them. But that does not mean there is moral equivalence.

Russia’s use of nuclear weapons would be for evil—to carry out an unjust imperialistic military campaign to subjugate Ukraine, while threatening to employ their nuclear weapons to coerce the United States and NATO to withhold certain kinds of support to Ukrainian defense. Putin doesn’t need to employ nuclear weapons for military purposes in Ukraine. Instead, he would employ them offensively for political reasons: to provoke terror in Ukrainians and nearby Europeans, to shock capitals across the planet, and cause fear and panic. All that would be designed to create pressure on Western backers to compel Ukraine to surrender.

In sharp contrast, the United States uses nuclear weapons to deter war, defend peace, and protect America and our allies in the free world. The United States adheres to the Laws of Armed Conflict (LOAC) in warfare and in nuclear deterrence policy. U.S. nuclear policy and targeting explicitly seek to adhere to the LOAC in part by threatening only enemy regime and military targets, by seeking to minimize unintentional civilian harm, and by not intentionally targeting innocent civilians.

This policy has been U.S. policy for decades and underscoring that the American approach is fundamentally nonpartisan just consider that the Obama and Trump administrations’ nuclear employment strategies shared significant continuity. Democrat and Republican American presidents have stood on common ground when it comes to nuclear deterrence.

The principles of Christian Just War Theory have informed the American approach. The reason the LOAC permits only harming the offending government’s means of carrying out its violence against the United States and our allies is because it embraces the just war principles of distinction and proportionality.

Just war theory is a mosaic of Hebraic, classical, and Christian thought and has formed the American way of war. And while each scholar brings varying nuances, the product of this mosaic is a guide of principles to help assess whether entering a war is just and principles for fighting the war justly. Christians have been thinking seriously about these moral questions for two thousand years.

Christian just war thinkers derive their assumptions about justice and government from the Bible and argue that those principles are soundly backed by both reason and natural law. These Christian scholars hold the view that God instituted government for a purpose. The governing authorities “bear the sword” that is, they have the divinely appointed responsibility to use force, if necessary, for the purpose of punishing evil, protecting the innocent, and restoring a just peace (see Romans 13: 1-7, 1 Peter 2: 13-14). While Ambrose, Augustine, and Aquinas are famous patriarchs of just war theory, Protestant giants John Calvin and Martin Luther and many others have also embraced and bolstered the mosaic of the historic Christian approach.

Strategists charged with protecting the American people have forged a robust policy and purpose for our nuclear weapons that is solidly influenced by and compatible with the morality of just war theory, as the Obama and Trump public clarifications support.

The U.S. nuclear policy has two parts. First, fundamentally, U.S. nuclear weapons are to deter other nations from harming the United States and our allies by holding at risk those things the enemy values most. To reiterate, the United States uses nuclear weapons every day to deter our enemies from carrying out the worst kinds of aggression against the American people and our allies. We deter our enemies by shaping their calculations so that they conclude that the U.S. response to any major attack against the American people or our allies could be met with an American retaliation that will outweigh any perceived gain.

Second, if deterrence fails, and the enemy attacks, the United States has a range of nuclear weapons available capable of destroying the enemy’s means of continued violence and destruction in order to protect the innocent and end the war on the lowest levels of violence possible, always seeking a just peace. The number and type of U.S. nuclear weapons have been determined by what would help convince our enemies that they will not prevail in a nuclear war with the United States and should not go down that path.

Misunderstanding the morality of U.S. nuclear deterrence policy could lead to policy decisions that weaken the effectiveness of deterrence and could unintentionally tempt the calamitous war that defense strategy seeks to avoid. Serious strategists charged with the responsibility of protecting the American people have, over time, adapted our forces to ensure we are able to meet deterrence requirements in a way that is morally justified. It is a difficult and complex task and US forces should adapt as adversaries increase their nuclear forces and, with humility, America should prepare for an uncertain future.