The United States and our allies must remain steadfast in deterring the Kim regime. 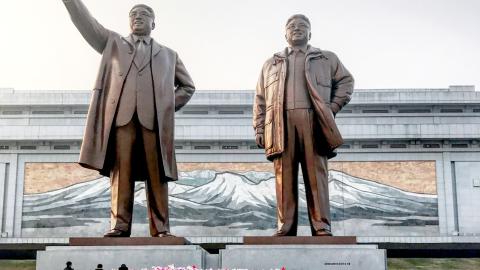 North Korea is on a missile test-firing spree and might be preparing for yet another test of a nuclear weapon. Pyongyang’s unprecedented rate of missile launches has mercifully left its neighbors unharmed, thus far, but that does not mean the tests are innocuous. They are not.

The most recent barrage of missile launches flew near (and over) South Korea and Japan—key US allies—and the North Korean regime said their missile launches and war planes were practicing to “wipe out” enemies in the region. Of course, the United States has troops (and their families) living in South Korea and in Japan, and on the US territory of Guam, deterring aggression and keeping the peace. But the tests are not restricted to threatening North Korea’s neighbors.

In March of this year, North Korea tested its largest intercontinental ballistic missile (ICBM) ever, the first time the regime had flight-tested an ICBM since the Trump administration’s effort at summitry. Like the ICBMs it tested in 2017, the range of the latest monster missile could reach the entirety of the US homeland, but this one was even bigger than the others. Its larger size suggests that it could carry more on-board threats, possibly decoys and countermeasures meant to confuse our missile defense system, or more nuclear warheads.

To know how much of a threat a country represents, one must consider both its military capabilities and the nature and aims of the regime. The Kim regime is one of the most inhumane on the planet. It would rather its people live in poverty and servitude, shut off from the world, than open its system and end its hostility towards the United States and our democratic allies. The regime enforces slavish obedience to Kim and feeds a constant diet of grotesque anti-American propaganda to the North Korean population. Little children are taught to be ready to kill the American “imperialists.” This vitriolic hatred has deep roots.

After the Second World War, and in the dawn of the Cold War era, the Soviets and Americans made a deal. Everything above the 38th parallel on the Korean Peninsula belonged to the Soviet-backed Communists and everything south would belong to the American-backed anti-Communists. Peace was fleeting, and in 1950 Soviet-installed Kim Il Sung of the North directed troops to invade the South to subjugate it under his Communist rule. The Americans led by Gen. Douglas MacArthur, along with other allies, came to the South’s defense. The Communist Chinese came to the defense of the northern invaders. The war lasted until 1953, ending in an armistice and not a peace treaty. The 38th parallel, with a 2-mile demilitarized zone, remains the dividing line today.

n the United States, the “Korean conflict” has been called the “forgotten war,” despite the loss of 37,000 men. But the North has thought about the war every day. Estimates put North Korean losses at more than half a million, while the Chinese losses totaled over 200,000.

Today, the North Koreans remain on the side of the Chinese Communist Party, and Beijing is happy to keep the Kim regime afloat by ensuring the UN Security Council passes only watered-down sanctions against Pyongyang. Even then, the CCP violates the resolutions that are passed. Iranian scientists are sometimes seen at North Korean missile tests, and North Korea has reportedly been open to providing Russia assistance in its war against Ukraine. Although the regional dynamics are nuanced across those nations, they do seize opportunities to collaborate against the United States and our allies.

Kim’s decision to resume missile testing and offensive war simulations are likely meant to force the Biden administration to make financial concessions or to acknowledge that North Korea is a “legitimate” nuclear state. Kim’s regime knows the Biden White House is on its back foot, reacting to one security crisis after the next. International terrorist threats abound after the precipitous Afghanistan withdrawal, Russia’s war of conquest rages on while Putin rattles his nuclear saber, Xi is cementing his lifelong ruler status in China as he directs his military to be prepared to take democratic Taiwan by force if necessary, and the Iranian regime continues its violence inside and outside its borders.

But the Biden administration should remain resolved to maintain the US commitment to deny North Korea the status it covets, should enforce sanctions for dangerous behavior, and should continue our defensive military cooperation with our Japanese and South Korean allies. Furthermore, it is imperative that we bolster both regional missile defenses and US homeland missile defenses.

Until the Kim regime decides to put the Korean War behind it and to forgo its aspirations to subjugate the South, or until the Kim regime collapses by one means or another, the United States and our allies should remain steadfast in our commitment to pressure and deter the regime. This is our best hope for peace.