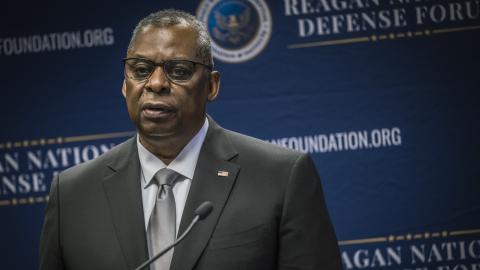 Secretary of Defense Austin has explained at the just concluded Halifax security meeting that defeating Russia in Ukraine could very well be critical to preventing further nuclear proliferation, just at a time when North Korea keeps launching nuclear capable missiles over Japan and Iran reaches a capability to produce upwards of six bombs worth of nuclear material in a matter of a few months.

Others think the U.S. involvement in the war in Ukraine is just another endless war that could draw the U.S. into a direct conflict with Russian, including the possibility of nuclear war. Certainly, since Russian President Putin’s serial threats to use nuclear weapons as a means of stopping the U.S. and it’s a NATO allies from defending Ukraine, the specter of possible nuclear conflict has become a serious possibility as Putin seeks to implement in the real world his “escalate to win” strategy.

It is true that some elements of both U.S. political parties agree. They both do not believe that any risk of nuclear conflict is worth risking to protect Ukraine’s sovereignty. At a recent town meeting, Alexandria Ocasio-Cortez was roundly criticized by constituents for supporting military support for the war, leading 30 of her colleagues to join her in writing a highly critical letter to House speaker Pelosi opposing future funding for the war. The letter was subsequently withdrawn as the House democratic leadership joined with the White House and soundly condemned such “progressive” thinking.

On the right, notable talk show hosts, some retired military officers, and other analysts strongly object to the U.S. support for Ukraine, citing that countries corruption and the lack of auditing of the near $100 billion already sent to Ukraine. Further, Ukraine is not a democracy it is claimed, and thus why are we risking a wider military conflict? Critics also assume that the “endless war” campaign” starting with invasions of Ukraine and Afghanistan were a trick to enrich the U.S. military-industrial complex, what one writer categorized as a bureaucracy that is “imperial, self-sustaining and expanding”, and does not serve any important U.S. national security objective.

Missing from both sides’ criticism is any apparent understanding of what is really at stake. Prime Minister Thatcher stopped the Argentinian seizure of the Falklands, as President H.W. Bush kicked Iraq’s Saddam Hussein’s army out of Kuwait, both doing so to cement into international law the near 400-year-old principle that military force is not to be used to change internationally recognized borders.

Ignoring cross border aggression has its consequences as Putin’s serial invasions of Georgia, Moldova and Ukraine prior to 2014 have now led directly to Russia’s mass aggression against Ukraine and what is literally a genocide of the people of Ukraine.

Whatever motive behind Russia’s aggression is immaterial. Yes, Russia has long ties to Ukraine. But so, what, and why would that justify an invasion? Does Russia fear the development of democratic reforms as occurred in Georgia which could leak across the border and give Russians notions about consensual government? Yes, but again too bad.

However, it could be that stopping Russia’s Ukraine invasion of 2022, unlike the U.S. avoidance of U.S. military responses to Russia’s previous invasions between 2008-14 of Georgia, Moldova, and Ukraine, would significantly weaken future Russian aggression and at least partially undermine Putin’s strategy of threatening nuclear escalation to avoid a conventional defeat.

The American Defense Secretary nailed it in recent comments at the Halifax security conference. If Putin is successful in grabbing big parts of Ukraine, what is going to stop Putin from deciding he needs next to take a big bite out of the Baltics. Did Ronald Reagan and the American people and our Cold War allies spend trillions of lose thousands of lives in battle to win the Cold War and eliminate the Soviet empire only to give it back to Moscow on a silver platter here we surrender the sovereignty of countries we are unwilling to defend? For at least half a century the “captive nations” of Lithuania, Latvia and Estonia asked for America’s assistance in liberating them form Soviet totalitarian rule. We answered their pleas and did so with pride.

If Putin’s nuclear saber rattling is successful says Secretary Austin, autocrats around the world “could well conclude that getting nuclear weapons would give them a hunting license of their own. And that could drive a dangerous spiral of nuclear proliferation,”

Austin further warned that “Putin may resort again to profoundly irresponsible nuclear saber-rattling” as the war drags on and if Ukrainian forces continue their gains against Russian troops. The Russian military head and his NATO counterpart have discussed the war, but Gerasimov wants all individual NATO nations to end all support to Ukraine, perhaps going back to the “blankets only” assistance of a previous administration.

The aggression is serving Moscow in a number of critically important ways. Having helped reversed Georgia’s democratic reforms, Russians continue to further occupy the country. And may turn the country into a convenient “corruption is us” no-law zone where international sanctions against Russia can be easily circumvaded.

Putin’s role of the nuclear dice assumes the U.S. and its NATO allies are unwilling to stand up to his aggression, reflected by the former Russian President’ Medvedev’s bold assertion that the U.S. is too weak or scared to stand up to Moscow should the latter use or threaten to use nuclear weapons.

Our civilian leaders say the U.S. deterrent both conventional and nuclear remains credible. It is also undergoing a much-needed modernization upgrade which is underway and will peak at the end of the current decade when it will have to meet enemies of greater strength than what we face today.

However, what is the purpose of such a deterrent if we are unwilling to defend our friends and allies when we can-- and when the American people have to this point fully supported our nuclear modernization designed to keep that overall deterrent credible into the future.