The Question on Putin’s Mind: Would We Risk New York to Keep Odesa Free? 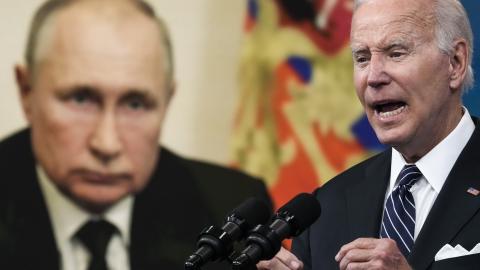 Caption
Joe Biden stands in front of a photograph of Vladimir Putin in Washington, DC, on June 22, 2022. (Drew Angerer/Getty Images)

‘A nuclear war cannot be won and must never be fought,” President Biden and Russian President Vladimir Putin said in a joint statement after their summit in June 2021. But Mr. Putin doesn’t always tell the truth.

The reality is that as Mr. Putin’s failing military skedaddles east across occupied Ukraine, nuclear weapons look more attractive. That is not so much because a tactical nuclear strike would be effective against widely scattered Ukrainian forces in the field. It is more that Mr. Putin hopes the political shock waves set off by nuclear explosions in Europe would shatter the West’s resolve to support Ukraine. Is Germany willing to lose Berlin to save Kyiv? Are Americans ready to risk New York to keep Odessa free? These are the questions Mr. Putin is asking himself.